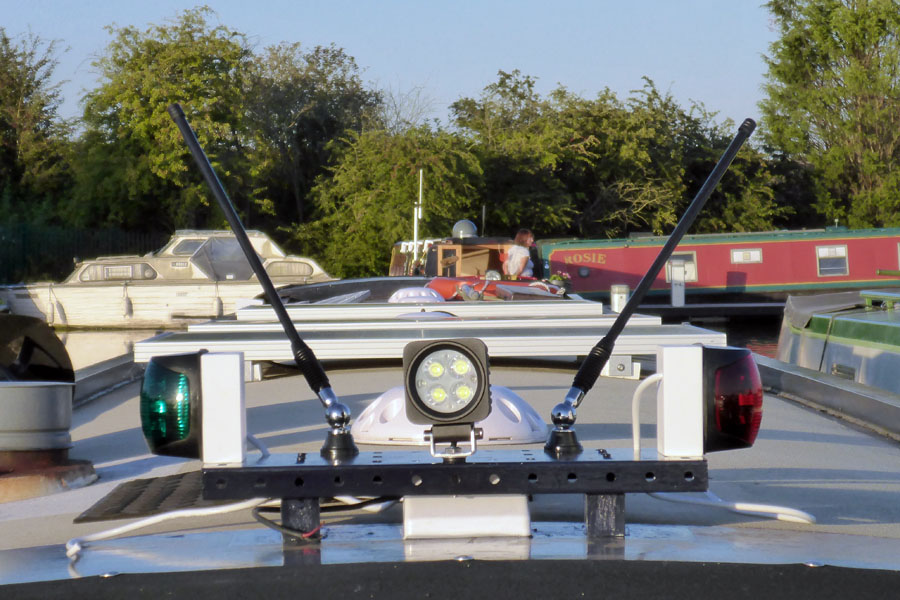 in place of the old tunnel light…

I just hope that the red and the green are on the correct sides!

Yet to be fully hitched to the systems but all is in place now. New LED tunnel light, set slightly upwards and to the right… Rinky dinky navigation lights… Satellite link in its wee box… and probably the most giggle-inducing bit of all, two motorised auto-tracking 80,000 volt Tasers as part of the security system. Trigger any of the sensors and, if you’re within ten metres of the boat, I get an option on my mobile phone (whether aboard or abroad) to lay you out and fry your hairy arse with a wee bolt of electrickery through the aether. I cannot believe that these things (the two black “antennae”) are legal, but it seems so.

Tally ruddy ho, chocks away, let me see your ne’er do well eyeballs (and suchlike) swivel.

Similar systems to be fitted to the rear, on a rack with the rear nav light, anchor light, some uber-floodlights, the horn and two more antennae.

Decks painted and new anti-slip rubber mat laid everywhere including in the engine bay, a manky little dark cupboard opened up into a six-shelf bookshelf (and the corridor made wider as an added benefit) – and some of the interior visual embellishments are up and running, such as these two over my bunk… 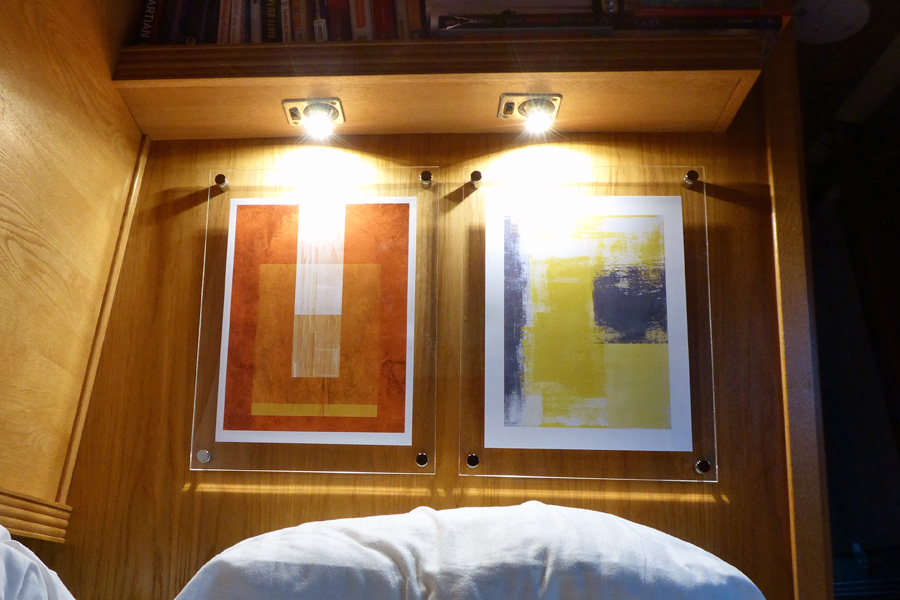 Yes, yes, they do rather betray my sixties and seventies upbringing, with bearded, sandal-wearing music teachers and Hillman Imps and Caramac chocolate bars and “It’s frothy, baby!” Cresta in glass bottles… but I love ’em.

How many ellipsesisies can a chap use in one blog post?

Right, I must away and fill in the firearms licence questionnaire for the Tasers. There’s a paragraph in there about a cheque or Postal Order for ten shillings or something, payable to Her Majesty’s Constabulary. Then I must away to my bunk to contemplate negative space within an organic juxtaposition to strong polychromatic statements in portrait format. Or I may just dribble over some splodges of orange and grey and yellow.

I love the smell of hot, smoking peasant.