Even when in a “car park for boats” (as I’ve heard them termed), a spell of cold weather can throw a blanket of mini-magic over the world… provided that the beholder has a snug and warm narrowboat to go back to after beholding.

A couple of mornings ago I stood outside in the dark at six of the morning o’sundial, listening to the very eerie sound of ice cracking and creaking as it formed in the marina. Until the invention-of-the-devil, evil incarnate diesel central-heating units of the neighbourhood began to cut in (sounding like small jet engines) the only other sound was the occasional duck-expletive.

Quack-quack [translation: I say – my arse is frozen quite solid, Delilah].

When Mr Sun put his hat on and made an appearance it was all suddenly very picture-skew.

That’s not mist over the fields, but the panting breath of thousands of cold foxes, sparrows, sheep, worms and poor, penniless farmers. Town-dwellers unused to the ways of the countryside often make this mistake. Same thing when a townie walks under a tree and thinks that it’s raining, when it fact they’ve just been blessed by a rare red incontinence-squirrel.

My perambulations took me both up the canal and down. I really ought to walk sometimes, rather than wheeling myself along in an old nineteen-thirty model Silver Cross “Take The Weight Of Anything” pram. There was not a wild vessel to be seen. Not an oil tanker, not a trawler, not a Spanish destroyer or Italian aircraft-carrier in sight, let alone a narrowboat. I can’t vouch for whether or not there were any submarines at large, either English or Russian, except to note that I didn’t spot a single periscope. Nor, for the pedants among you, did I spot multiple periscopes. The issue of submarinery thus remains moot. 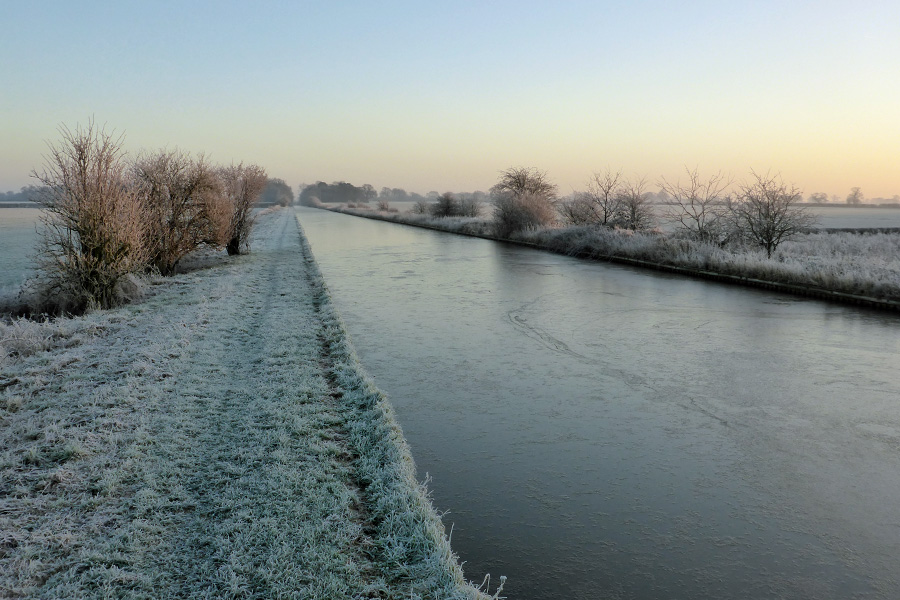 Yesterday morning I got back from my strollette to find a mild case of panic gripping my fellow marina inmates. There was some sort of local area power-cut in progress (doubtless an act of terrorism of some sort, the Women’s Institute Suicide Squad or some such). The problem was not that the boats were without shore power, but that the ruddy barrier across the car-park entrance was down and could not be persuaded to move up…

Stop, for once, was prepared to stand its ground, even in the face of four vehicles trying optimistically for egress and one, foolishly perhaps, dodging back and forth with ingress in mind.

Eventually, an enterprising chap with oily knuckles fetched some tools or something, and unbolted the whole device in the name of liberté, égalité and, quite frankly by that time, some heartfelt sodthisforagameoftinsoldiersé.

It was tense though, for a few claustrophobic minutes.

More light-hearted moments were provided by the marina’s avian inmates. You haven’t snorted whisky-fortified Bolivian cocoa through your nose properly until you’ve stood in your lovely, warm, Margaret Rutherford body-suit onesie watching ducks walking on ice – or even standing about on ice.

Do shut up, Sebastian, and try not to notice.

Marjorie? Do you know that you’re sinking slowly?

Lavinia, if you knew the troubles I have known, your spirits would be sinking slowly too.

No, no, Marjorie, I meant physically – you’re up to your knobbly little orange knees.

Oh shit! Help! Quack! Help-quack! Somebody call out the RSPB lifeboat… Where’s Johnny Morris when a girl needs him? QUACK!

The more sensible of the duck population, namely Albert, Roderick, Tarquin and Dave, spent their time padding about on the pontoons, performing renditions of barbershop quartet numbers for pennies and warmed millet.

They put on a passable show, considering.

Aware as I am of the effect that cold can have upon a chap’s extremities, and believing that discretion is indeed oftentimes the better part of valour, I retired my extremities indoors with the haste afforded only to one who knows that he has tried and has done his best, but must abandon the world to its own devices.

The headline here (and in the Associated Press) may say something about bread and stew, but that was then, this is the now of the day after (but not today, which is quite another day altogether), and so the billycans were filled one with rice and one with curry, and I placed them upon the stove, god save the queen etc etc.

All that remained, I thought, was to settle down and, in due course, put the feast through my alimentary canal and send it on its eventual way. How wrong could I have been? Some twonk thought himself called upon to “pop out for an overnighter” and thus proceeded, farcically, to play the part of ice-breaker.

All very well, if he cared not for his hull blacking, but his ridiculous arctic manoeuvres sent great slabs of inch-thick ice crashing into every other boat in this half of the marina. As if this wasn’t twonkery enough for one man, he then rammed half of the boats – including the Cardinal’s bow – because he couldn’t steer in the conditions.

I curse him, and I hold him and his progeny for seven times seven generations, in some serious tut-tuttery. May he never moor again without attracting the attentions of the canal-shark and the sabre-toothed waterway-vole. May the Blue in his bog have no olfactory effect whatsoever, most especially in high summer. May his nuts forever entangle in his centre-line.

Not content with bashing everyone about so that he could go out for his jolly, he came back the next morning, and performed a similar pantomime at our expense.

I shall miss him, but my aim is getting better.

So, you see, when someone tells you that life on a narrowboat is so relaxing that you’ll need to make artificial arrangements for your various sphincters, it’s not quite true now is it? Frozen in, smoked out, refused exit, surrounded by talking frozen ducks, forced to eat well and then subjected to dingbats in faux ice-breakers – it all happens afloat. Somewhere, some time or other, somehow and usually goodness knows why.

I fear it would simply gild the lily to tell you of the happy hours I’ve spent, watching the gauges as my batteries feed and the marina wifi signal comes and goes like a wraith in the night, depending on how many people are on iPlayer for re-runs of “Get Me Out Of Here; I’m Clinically Sane” and “Cooking With Puy Lentils For Hitler” (or whatever passes for popular television these days). Happy hours spent moving coal from storage to the bucket and thence to the stove. Ash from the stove to a different bucket and thence to the ash-box in the car park. Logs from storage to near the fire and then into the flames as required. Sometimes I take water from the pontoon tap and move it to the Cardinal’s water-tank. Sometimes I take a mystery package to the euphemistically-termed “the Elsan point”. The Elsan Point is not, as you might think, a dramatic, windswept headland or other geographical or coastal feature sponsored by Elsan Ltd. Nope, it’s a bunghole and tap surrounded by a small fence arrangement to prevent passers by involuntarily shouting “eeeww!” and burying their faces in their handkershiefs.

Oh yes, the The Rhythm of Life is a powerful thing (other lyrics are available, mention here does not imply endorsement of Sammy Davis jnr or of San Francisco, sanity is a relative state of mind if you don’t mind, all hippies are bastards but not all bastards are hippies).

It is getting dark again now.

Another day is spent and I have just a book-and-gin-with-toes-warming-by-the-stove-soaked evening to look forward to.

I dare hardly go to sleep for fear of what tomorrow might bring. One never knows, afloat. Anything’s possible, and, quite frankly, it all happens here.

I mustn’t let the strain of it all get to me.