Yesterday, all (of) my moorings seemed so far away, now it looks as though I’m here to stay (for a bit), oh I had lots of fun, yesterday…

The Cardinal and I moved again yesterday. I waggled the ignition keys and he growled. He growled in that eager way that he growls. Ignition, pre-heat, flick, rumble.

It was a bit of a breezy day, but needs must when you’ve been on 48-hour visitor moorings for 48 hours. Besides, we had things to do. Bags of rubbish tucked into the corners of the well-deck, Thunderbirds II, III & IV in need of a quick visit to a small room, the main water tank half-full (or half-empty, depending on which way I looked). Stuff. Stuff to do. The Bro scored himself a day-pass from the Institution and turned up to join the fun (I had promised him no more re-enactments of Robinson Crusoe’s last moments as a competent, non-shipwrecked deckhand).

Well, with the possible exception of my short spells in a small room with Thunderbirds II, III & IV, fun is exactly what we got. It was most splendid indeed. Sun shining and reflections sparkling on the water – and even the idiot on the tiller got it right almost all of the time.

This was an “out and then back the way I came” trip, since I have little to less-than-no intention of doing the Audlem locks just yet. Some three liesurely miles (as the duck swims) from the Coolé Pilaté visitor moorings, via Overwater, a quick sniff at the thought of Audlem and back towards Nantwich again, stopping just beyond Bridge Nº.82 for a spot of towpath without the Shroppie Shelf.

This time I put the cross-wind to good use. In under Overwater’s pedestrian bridge (it’s actually quite a nice bridge, “pedestrian” sounds a little bit disparaging) and a sharp left (that’s either “port” or “starboard” depending whether you’re in the northern or southern hemisphere) – effectively a u-turn. Turning the Cardinal’s nose into the breeze I then rang the Chadburn for “done with engines” and let the wind push us in nicely like a nice thing, and very nicely done it was too. Phew! 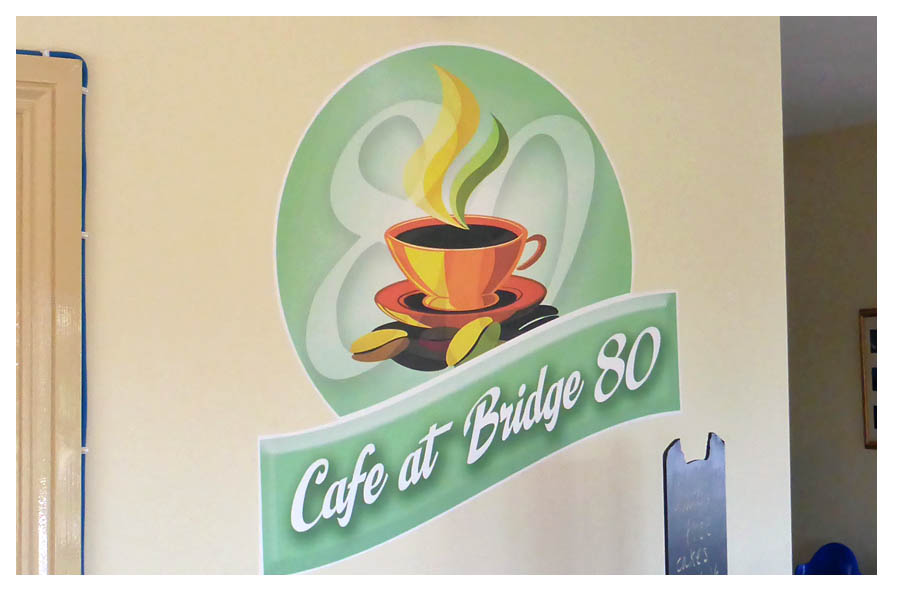 …there came the small matter of the reverse manoeuvre to get the Cardinal back out onto the canal. Well, yonder breeze came in handy there too. A spot of reverse on the screws and as soon as the bows cleared the pontoon (rolling along on a couple of fenders we put out for the purpose) a small encouragement began to get the nose around towards the exit, and the breeze did the rest. Simples, dimples.

And do you know what? Aside from me and the Bro, there was not a soul watching.

There never is when I get it right.

We got back out onto the canal heading in to the wind, flatted out the scrag-sheet jib-frillop, set half a dozen extra snidgens of main-mast canvas, trog-dunioned the velocette lashings and had a really, really enjoyable, albeit necessarily brief trip back up to where the Bro’s car was parked. Not entirely sure of the moorings so I called for ‘…the lead if you please, Mr Calamy…’ and we found the bottom to be half a fathom and sand and broken shell rather than the more usual concrete and iron piling. Splendid.

On went a variety of strings and some really quite revolutionary knots and there we were, here. Here we are. No longer there any more, but moored here. The solar panels are sucking the vitals out of the nearest star (using curly-wurly straws), the breeze today is bobbing us around like a bobbing thing and the wavelets are making that “plinketty-plink” sound as they lap agin us.

I am hoping that some of the natives may row out to us later in dug-outs, offering swapsies for pineapples and small monkeys. My steward has been denied his rum ration because I don’t want a repeat of the mix-up we got last time, when I was expecting pineapple cubes and a pet monkey on a lead, not, well – you can imagine.

A folk or two have been asking about the internal lay-out of the Cardinal, so in very general terms, here is a wee diagram.

The Cardinal is mostly open-plan, with just the usual offices being behind bulkhead and door. Bookshelves have been added everywhere that there was room, something about 37′ of them at last count. Storage has been simplified and more introduced, the ricketty old “dining” table area has been replaced with a solid “study” desk area, the bed rebuilt and the kitchen brought into the twenty-oneth century with new worktops and wotnot. The original manky ol’ carpet has all gone, replaced with oak flooring – laid across the boat, to emphasise the width. There’s carpet up to the gunwales (insulation, sound-deadening, relieves the previous “too much wood panel” look), artwork bunged up everywhere (eleven perspex and chrome frames so that I can easily change the contents) and as much as humanly possible of the brass & carvings line removed (with more to go this year). There’s a rinky-dinky new control panel for the electrics, a new perspex-fronted cupboard for the machinery and most of the 230-volt wiring goes down one side of t’boat with the 12-volt wiring feeding along the new “industrial look” galvanised metal cable tray on t’other. The stove surround has been re-worked, with new heat-insulation panels and more of the galvanised metal look.

It has to be said the Cardinal is the most incredibly practical and comfortable man-cave afloat that I have seen to date. There’s none of the “cigar-tube” feeling that I experienced while looking at others for sale.

There’s a raft of finishing-off jobs still to be done, esp. now that the weather is heading towards the more clement. The Cardinal is built to live on, and live on I shall. There will be no rushing hither and thither, but a gradual and stately progression around England’s canals with slow and steady walks to either side to visit anything and everything that grabs my attention. The next items to grab my attention go by the name of Dorfold Hall (nice sixteenth-century pad, with parklands), maybe Nantwich museum, then Beeston Castle & Park, remains of. It’s my time, and I will be taking my time!

Average speed while under way, something nudging 3mph.

I really must ease back on the acceleratrix.

Average fuel consumption? That appears to be about 8mpg so far, but it’s too soon to tell accurately.

It’s a good job that the Cardinal is ship-shape and Bristol fashion – some of those waves out there today must be three inches or more, almost breaking. Rollers with wrinkles.

Since I have started to blather on, have I mentioned that I saw a Great Crested Grebe (in winter plumage) last Sunday? Odd-looking thing, thin neck, body very low in the water – dived rather than flew off when disturbed. Must have stayed under for thirty feet before it re-surfaced, long enough for me to begin to worry about it.

Doubtless the Grebe is on a nest somewhere now, trembling as it says to loved ones ‘Have I mentioned that I saw a Lesser-Foreheaded Human last Sunday? Spring plumage? Eee, by gum, it were ‘orrible…’