So, when you’re low on coal and wood and diesel and gas and things who are you going to call? Well, certainly not the last batch of two-flops-a-second, couldn’t-catch-Casper-if-you-tied-him-into-a-paper-bag-for-them “Ghostbusters”. No, you are going to call Halsall, the fuel boat.

The one-way blue-tinted glass in my windows and portholes confuses the hecky-heck out of my cctv cameras – it’s high time that I set to and organised proper exterior mounts! Still, you see the idea. Imagine a floating market in some corner of the far-flinged far-flung world – hustle, bustle and crowds and noise. Then imagine one boat, birds tweeting, clouds drifting, hedgerows growing quietly, the thump-thump-thump of a classic, low-revving engine on an old working boat…

This boat, and others like it, patrol their patches of turf (canal) on a fortnightly basis. This being the twenty-oneth century customers get notified of their schedule via text message and email and online on the interwebnettings. Cuss-toh-mahs then just respond with their needs and, hocus-pocus, bibbidy bobbidy boo, oo ee oo ah ah ting tang walla walla bing bang, Shem HaMephorash and even klaatu barada nikto – this nice chap pootles up and delivers right to your gunwales (not, absolutely not, “gunnels” in English English whatever the scheming hidden-agenda lying political nutwits at the Oxford are now telling us as they try to merge current, modern English and the American language in order to save corporations money).

The seasons in England are not so much meteorological or even climatological, but more a state of mind, a condition of wardrobe, a whim of some perverse Roman or Greek god. Thus, it is often colder (and snowier) in April than in March, and bits of Winter may oftentimes be found strewn over Spring and Summer, with all and each of them eager to hand over to Autumn. The Cardinal’s stocks were down to a single bag of coal, and as far as wood went, well – I was on the verge of burning some of the Chippendale from the smaller dining room. Halsall was due in the area, and I gave Halsall a call.

There’s something very, very civilised about this service. A chap doesn’t even have to be aboard to have coal, wood, diesel and wotnot delivered – the two boats up from the Cardinal got all of their needs met without the owners (“keepers”?) being present. Halsall chugs up, the guy lashes the boats together and the rest is just a card payment taken by hand-held mobile device afloat.

Five sacks of Excel are now secreted about the Cardinal’s cunning storage, there’s wood a-plenty in the well deck, and the stove won’t starve for a while yet. Just because there’s a small patch of blue sky overhead is no reason, no reason at all to strip off another layer of longjohns. I didn’t get where I am today by stripping off my winter longjohns too early. Besides, I don’t have the necessary methylated spirits to soak off another layer. 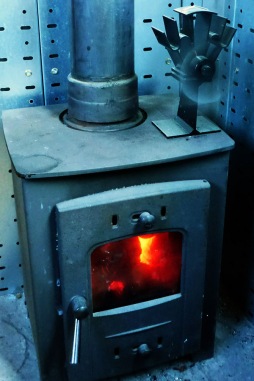 Yes, yes – Mr Stove does still carry the scar of a minor overspill while cooking some rice, and yes, Mr Stove does need a general dusting down and brush-up. Mr Stove though, like the rest of the Cardinal, is a working beast, a functional feature, a fine figure of a heating thing. He’s happy. As soon as we get two or more days of Summer in a row, he’ll get his.

The trick today will be keeping Mr Stove ticking over, just enough to keep the place canoodly but not so much that I need to keep opening the doors.

So, let’s please put your grubby hands together and have a quick round of applause for the fuel boats. The King is dead – long live the fuel boats! Huzzah, and all of that sort of stuff. Huzzah! Sodbucket – pass me the firelighters, and then tell Cook that I want lunch at two.

Talking of which, we are hurtling towards the asparagus and strawberry season. I wonder if there are any boats… no, no, a silly idea. I shall have to venture out onto dry land in search of those.

Gin too, I suppose.