A short trip to the nice chaps at Aqueduct Marina to acquire bolts of various sizes, some of those peculiar nuts with the nylon inserts – the ones that rarely if ever come undone – and a packet or two of biscuits, combined with an arrival of the Bro bearing the fabrications of a new mount for the oil-pressure sensor and there we were. There I was, back in the engine bay. Grunting. Wheezing. Creaking.

Grunting. Wheezing. Creaking. Sounds like a firm of solicitors with wood-panelled offices in some market town, staffed with dusty clerks with ink-pens. Grunting Wheezing & Creaking (Deceased), Solicitors & Swearers of Oaths by Royal Appointment. Open whenever the local inn is not.

I am out of practice with being back where I was, in the engine bay. DIY is fun enough when performed on dry land, but on a boat DIY is, by tradition, performed upside down, back to front and with much goofiness aforethought. To wit, I spent yesterday either straddling my nice big Isuzu engine like some overweight, bandy-legged Colossus in Springtime, or I spent my time lying face-down on top of my nice big Isuzu engine, cracking my sternum and spreading my ribs to all four points of the anatomical compass. Either way I looked like a right plonker. My feet, being size 11, spent the day splayed because of the shape of the swim. I used muscles that I didn’t even know I’d had fitted and, if my backside wasn’t stuck on the Mikuni central-heating boiler then it was wrapped around the engine exhaust like two part-baked cottage-loaves huddled in the cold around a warm water-pipe. At times, had I broken wind, it would merely have sounded like an avant-garde musician tuning up a 3″ exhaust-pipe, pre-concert.

In the end though, and believe me, it pains me to use the phrase “the end”, the oil-pressure sensor was remounted not on its original proprietary single p-clip-with-bolt, but on two mini-girders with four bolts and four lock-nuts. Upon starting the Cardinal’s thump-thump engine there was just the briefest of pauses – just long enough to give birth to worry – and then the hitherto troublesome gauge sprang into life and registered – Greek and Roman gods be praised – a spiffing 75psi (“cold”).

Ruddy phew! The Bro left in time to return to his cold, dank, artist’s garret before the landlord locked the gates and released the guard dogs – but he left with the grin of a job well done all about his face.

I went up the wooden staircase to Bedfordshire at nursery o’clock yesterday evening. My brain didn’t need sleep, but my body was demanding it. I love my bed. My bed loves me. We slept together like oddly-shaped, one sentient one not, meerkat cubs, right through to you-ought-to-be-ashamed-of-yourself o’clock this morning.

I couldn’t have moved the Cardinal yesterday if I’d tried. So, instead, we moved today. Another “test” distance, with me watching the gauges like a hawk with a preternatural interest in engine gauges. Odd, I warrant you, but there you go, that’s me.

The Bruiser Brother Swans visited me.

There’s Bruiser in the lead, followed by Gnasher and Crunch. 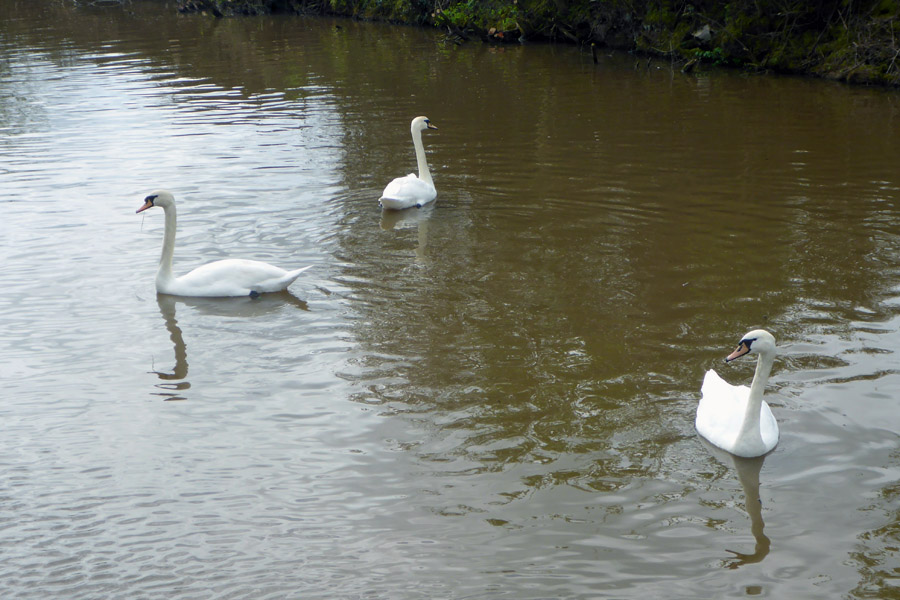 I navigated the Cardinal just over a mile further up the Shropshire Union canal, and then we called it quits for the day, since I wanted to do some more sitting down and some more “nothing”.

Tomorrow, or the day after, we’ll move again.

There’s such a crowd here, I almost didn’t know where to moor. 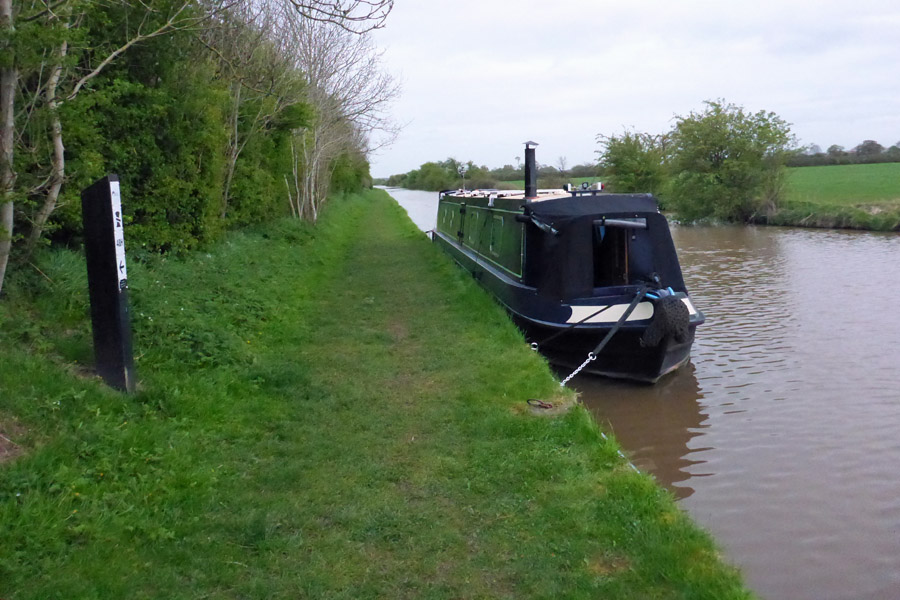 The Cardinal and I are almost back where we were a whole cycle of the Moon ago, not far from the new-cue-lar bunker place. Same old bridge, just the other side of it and facing in das oppositen direction, if you’ll pardon my foreign.

I’ve read two more books since last I blogged, taken delivery of four more (three narrowboaty ones and an Inspector George Gently) – and steamed some nice new spuds and stuff with mint and things for luncheon. It’s all go, you know, when we’re not actually going, and even then there’s quite a lot of go.

Passed one snotty B on our way up the cut from there to here. I raised a cheery wave and offered air-hair-lair, as you do. She glanced, twitched a disapproving (blue, permed) eyebrow and sniffed, telling me all that I needed to know about her and the silver windlass that’s been lodged in her rectum since the day she was born to parents called “Brasso” and “Mushroom Vent”.

I smiled again, just to annoy, and thought dark thoughts about whether she would fall in and sink or float if I were to whip-crack her on the buttocks with my centre-line as we completed our passing manoeuvre.

Unless she reads this blog, of course. 😉

Perhaps she was having a bad day. Perhaps her favourite race-horse had lost at its last outing, or had died, or something. Perhaps her daughters, Daphne, Clementine and Chlamydia weren’t doing as well at Roedean as one had hoped. Perhaps the wind had changed, just when last she had indigestion and was stifling a belch (for that was her expression).

Being cheerful’s not compulsory. Should it ever become so I would be in trouble.

Anyway, there’s the news. The Cardinal’s minor wotnot is repaired. We have moved and we’ll move again in short order. There are miserable people on the canals every bit as much as there are on land (quelle surprise). I’ve had lunch (no photos) and I remain, from tip to toe, in sore need of some (more) sitting (and lying) down, just until the feeling of having been trampled by cows go away.

Talking of which, why the cows in the first photograph? Why, if it comes to that, the geese? Well, just because. Rather bucolic and rather splendid they were, too. Does anyone else find it very disconcerting, the way that cows make eye contact and lock on? I’m never sure if they are about to start an argument with me or a fascinating conversation.

Geese, on the other hand (and you should probably wash your hand afterwards), are just very silly creatures indeed.

Right, well I don’t know about you chaps, but I’m all for another plate of warmed comestibles, a mug or two of chai, the next good book to read – and as little immediate activity as may be possible.