Bunbury Mill is about half or two-thirds of the walk from the Shropshire Union canal towards the (real) Bunbury village. Notable Benny – you do take your life in your hands while walking to it – 87.3% of the motorists who passed me were murderously insane and will, after the revolution when I am Lord High He-Who (Must Be Obeyed), not be in charge of anything more substantial than a plastic feeding spoon.

The earliest record of a mill existing on this site is dated the year 1087. It had a sleepy if workmanlike history for the next half a thousand years until there is a record of Elizabeth Rowlinson “slayne with a piece of millstone whilst milling”. No elfin saferty then, obviously. The place burnt down sometime during the 1840s and by 1850 had been rebuilt in its current incarnation.

In December of 1960 a flood breached the millpond dam and a dirty-great chunk of a tree tore through the sluice and wrecked a large part of the machinery. Being lily-livered wussy imitations of our former selves, we then naturally simply abandoned the mill, and it lay in bits until being rebuilt under one of Her Maj’s Government’s “job creation scheme” schemes during 1975-1977. Sympathetically, sometime in this period, North-West Water (later “United utilities”) built a sewage-treatment works on the site and used two-thirds of the millpond as a fill-in dump for the earthworks removed thus. Lovely.

The spoor of United Utilities lies right next to the “Visitor Centre” to this day. Locally-baked cakes, tea and coffee are available in the visitor centre. The Visitor Centre toilets have a decent flush and not far to travel.

If you’re in a hurry and can’t be apexed reading the rest of this post then here is a ninety-second Cook’s Tour of the mill in videological format.

Does anyone know where the Cannes Film Festival is being held next year?

So. The mill. £3.50 a pop for a guided tour that took about one Earth hour. It was all very relaxed and informal and unrushed, with dialogue, banter, questions and few industrial injuries, all things considered. May I say that it was a rare treat to meet entrance prices of such sensible proportions, and it was a pleasure to fork over the coin.

If the mill looks a tad small this is because from most viewpoints only the top floor is visible, it goes down and down and down… as you might expect, since water in the grip of gravity is what powers the thing. The millpond, even though a shadow of its former self thanks to the brains at United Utilities, is a weeping-willow and duck-filled thing rating about an eight or a nine on the Picturesquenessnous Scale. I set out on a dark and cloudy day in the rain, but by the time I’d attained the mill Mr Sun was shining and the water was doing that primal sparkle thing, the thing that made us drop down out of the trees so many years ago.

Mr and Mrs Duck, sat sitting in the grass discussing Mr Duck’s putative shortcomings in the duck-bedroom department. I listened just long enough to ascertain that their pet names for each other, as with most couples, duck or human, were ‘Bitch’ and ‘Bastard’. 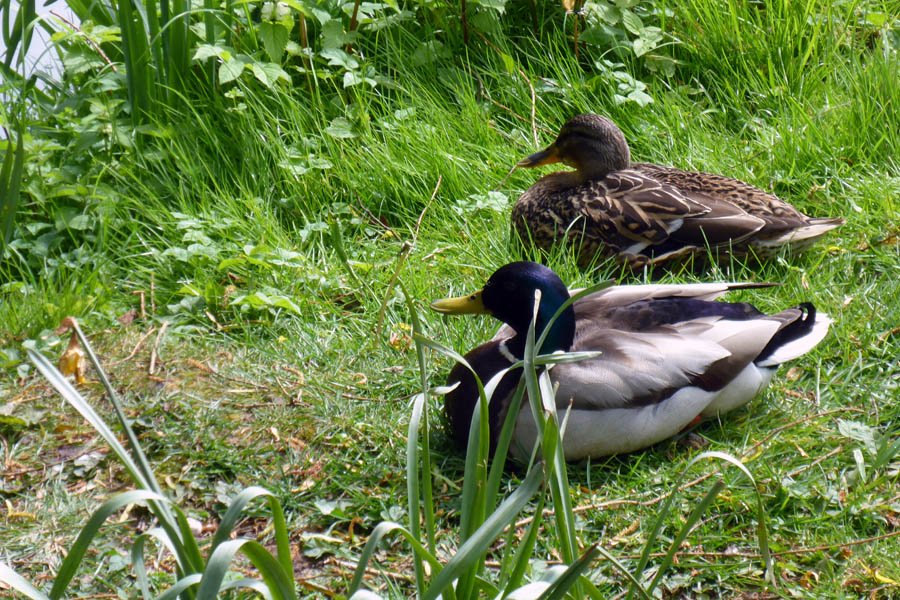 The mill is in full working order, albeit little-used these days, and all of the impressive machinery is in frantic whirly-spin mode for the open days. Immediately upon entering the (top) floor of the mill there is a gutteral thundering – sufficient to make me worry for the long-term integrity of the brick-work, the vibration just seems to be a touch too much to my mind.

The water-wheel itself has been partially restored by the volunteers, and a fine item of woodwork it is too. 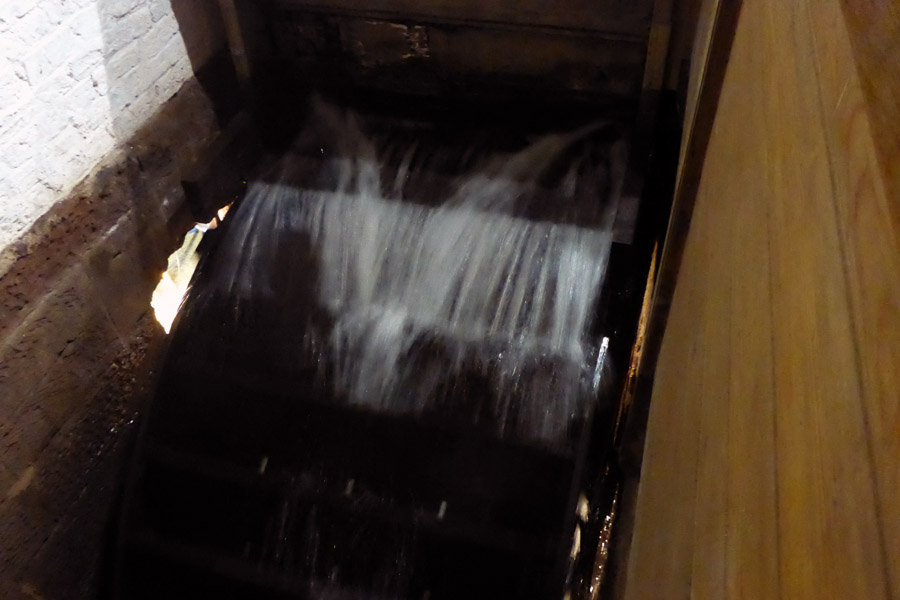 All of the various hoists are in working order and were demonstrated, although with sacks of flour rather than the bodies of politicians that I would have preferred to have seen being yanked up and down on the end of a rope.

To gain an idea of how much physical work a water-mill does I had a few turns on a Roman quern-stone set that was on display. Let me tell you that you would need to have eaten three, possibly four Weetabix in order to grind the makings of three or four Weetabix. Hard work it is, Yoda.

Recommended and worth a visit? Yes indeed. A very friendly place, well-run and with just enough to see without feeling as though one is being forcibly ej-oo-cated.

I thoroughly enjoyed it. Tis a shame that arriving by boat requires such a murderous walk, but then had I been able to moor the Cardinal in the millpond we should have eclipsed the mill itself with our combined gorgeousness.

This probably concludes the touristy blog entries for the Bunbury area. Onwards and farther, mayhap to Beeston Castle next.