One of the rewards at the end of the Llangollen Canal, if rewards there need be, is the Llangollen Steam Railway. Trains that run on boiled water! Well, if truth be told they run on tracks, but it’s the over-excited H2uh-oh that moves them along. Tap water usually, not Perrier. Perrier gives the engine the burps.

Ten miles of delicious eccentricity runs from Llangollen town to Corwen, and it runs past several sheep, a bit of the River Dee and a spot of countryside. To web from the quotesite:

Llangollen Railway is the only standard gauge heritage railway in North Wales. We are located beside the historic Dee Bridge (built in 1345) in the centre of Llangollen town. The journey is a relaxing 10 miles travelling through the stunning Dee Valley to the lovely town of Corwen the cross roads of North Wales. …

So there’s lovely for you, and it is. For about £13 a ticket a chap gets to ride the chuff-chuff some ten miles out and then some ten miles back to Llangollen – and all in a nice First Class compartment in a carriage with a proper, old-fashioned corridor. For comparison purposes, the initial commercial railway on this line opened in 1862 and £13 then would have bought you Argentina with enough change left over for an ice-cream.

History has given us many, many fine locomotives: the 4:50 from Paddington; the Titfield Thunderbolt; the 3:10 to Yuma; von Ryan’s Express; the Empress of India; both shunting engines at Bhowani Junction; even the Midnight Train to Georgia. The world’s fastest steam locomotive ever is the Mallard, proving for once and for all that Jenny Agutter was one hell of a train driver even when not in front of the film cameras. The record, you say? Oh, that’s 126mph.

This wee locomotive is a little bit slower than that, but still very businesslike and impressive – if you are a fan of bloke stuff (and I am). After the apocalypse it will be in my collection.

The station itself is very nicely laid out with faux-luggage and gentlemen and ladies looking into one another’s eyes and waving white handkerchiefs as they each consider marital infidelity. I have never been a fan of infidelity, much preferring Grundig or Pioneer – a more mellow sound, I find, when listening to the Light Programme.

Our trusty puffer with the catchy name of “80072”, all steamed up with somewhere, just for a change, to go. I told the driver that he should give me two minutes to take my seat and then he should proceed. The story of the engine may be found on this website.

Above is a rare self-portrait. I call it “Reflections of a bald git.”

The ten miles of track in use follows the River Dee, and all of it, rather like my underwear, an area designated as A Site of Special Scientific Interest. This just means that Her Maj’s government has an iron fist controlling everything that goes on in there. It’s very scenic though, for all the science involved.

We set fire to a lot of it on the way out. On the return journey we were initially puzzled by there being more smoke than would seem necessary from 80072, sparks flying and the crackle and heat of a fire rather close by the windows of our compartment. The train indeed squealed to a halt. By dint of some rather clever “the poking of our heads out of the windows against all regulations” we discovered that the train had stopped so that the chaps on the engine could spray water on the embankment. I suppose that sparks from my incendiary wit had, at some stage, blown out of the window and set light to the dry grasses. There was also a chap with one of those politician-thrasher thingies, a flap of un-firelighter on a stick, but he didn’t use it.

The train carriages were a revelation in themselves – the seats, for one thing, while a little arthritic in the old springs line, were wide enough for a human being to sit in comfortably! Richard Branston with your Virgin nonsenses please take note. There was – brace yourselves – leg room sufficient unto a six-foot tall chap like me (just). Luggage racks and everything. A real, live ticket-inspector came around and inspected our tickets.

I don’t know what he expected to find on them, but I hope that he found what he was looking for somewhere on the train.

Do you remember these?

By Jove, if the track was really bumpy you could have a lot of nearly-sex in a corridor like that as one squeezed past other passengers. Oh I do beg your pardon. Thank you, if you could just excuse me? No, no, I think it was that gentleman’s umbrella. May I assure you, Vicar, that I don’t have a dog with me…

All gone now, save for these “heritage lines”, and the younger generations will never know such innocent (and inexpensive) pleasures.

I’ve put together some snippets of video of the trip, which may or may not interest you, probably depending upon whether it is that you have the video stream, Myffanwy, it is (and TBH, that’s about as authentic as Dick van Dyke’s “cockney” – my apologies to all of Wales)! 😉

Can I bring myself to recommend a visit and a trip? Oh yes indeed. It was a very gentle pootle, with lots of clanking and some whistling (on the part of the engine, one presumes) – and Llangollen itself has some very fine eateries and alternative places of visitation. I may come back next year, just to check that Dr Beeching hasn’t had the line electrified or shut down again or something.

I’ll leave you with a view of the station at Llangollen and one h.a.p.p.y. thought.

…and here’s the h.a.p.p.y. thought. There’s not one thing on this notice indicating a requirement for the removal of screaming brats, toddlers and rug-rat spawn from the push-chairs and buggies before their stowage in the Guard’s Van. Nothing requiring their collection again after the trip, either. Dump ’em in there folks! 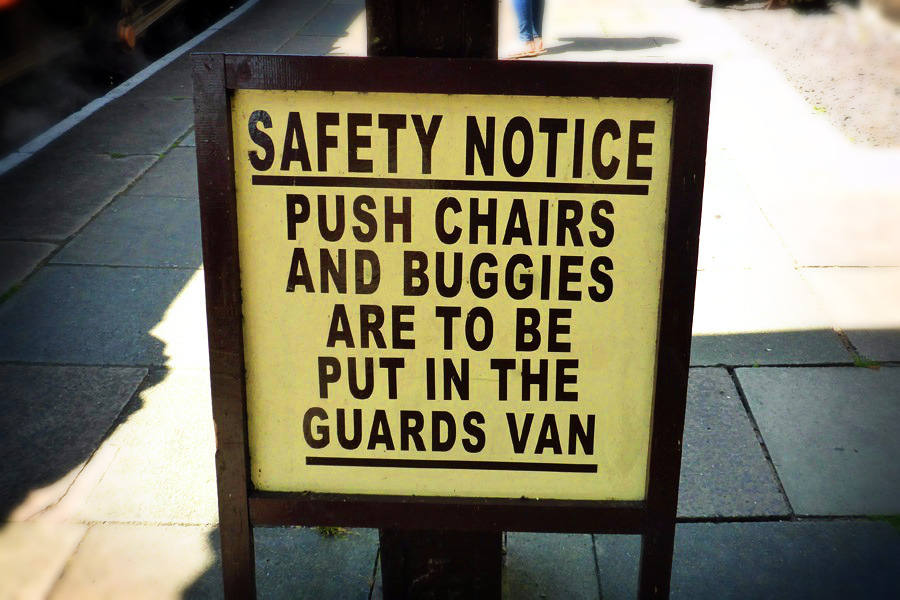 Chin-chin, folks, for the moment.