The Cardinal navigated back down through grisly Grindley Brook locks with ne’ery a hiccough en route, and in fine record time too (although others – almost all others in fact – were not so fortunate). The “The Bro” came to assist, and we locked and we lunched.

We lunched at least sixty calories (each):

A splendid day, yes, but I confess that in a strong breeze and with what I suspect were faster than usual by-washes (rain and mayhap the amount of traffic through the flight), I did channel the spiritual essences of Timothy West and Prunella Scales on one or two occasions. I ask you though, who the hecky-heck designs locks with gushing by-wash outflows flowing across a chap’s bows immediately upon exit from every lock? An industrialist who never skippered his own boats, that’s who. You can’t steer a narrowboat out of a single lock until all of it is out of the lock – and by then it’s too late to do much except squeal “oh my giddy aunt, this is an undignified manoeuvre” and “gosh, Rupert, we do seem to be moving sideways rather a lot”.

At times I was reminded of the one or two occasions throughout history when England has sent in her gunboats. Certainly, those ashore yesterday quivered and quaked, and several boaters were sufficiently moved to seek out sticks and items of semi-white underwear, the better to signal their surrender.

Let me begin, though, at the beginning. 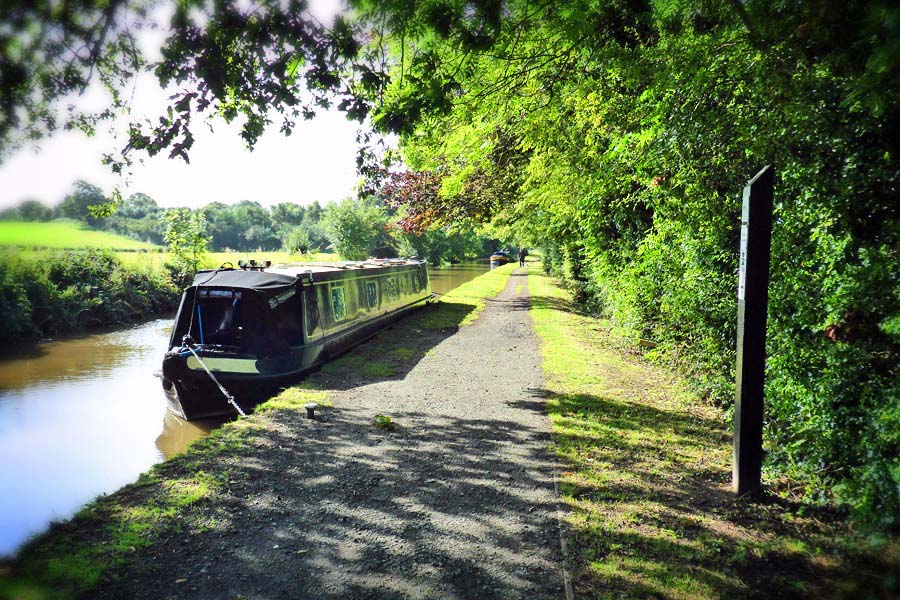 The Cardinal snoozing at comfortable moorings above the Grindley locks, H2O tanks full, Thunderbirds empty, recycling and rubbish squeezed into the over-stuffed skip behind the services block. From here it was on with the steery-steery waggle-stick, increase revs to slightly more than tick-over and a pootle along to the already-forming queue waiting to be syphoned down through the lock flight.

Grindley begins with a staircase lock of three, controlled by – yes, yes, Ethel, it’s them again – those employees and volunteers. Boats are shuffled three down, three up. We arrived fourth to a queue of three and for our audacity were awarded a thirty-minute wait while the “ups” came up. No bigee. Boat number five in the queue arrived and eschewed the more usual tactic of mooring up – along with any notion of reporting the lock keepers – preferring instead to dance around manoeuvring back and forth and sideways in the wind for some reason. The lock keeps weren’t best chuffed with him. Boats six, seven and eight arrived then in quick succession and, to use the salty old sea-dog semi-secret parlance (not to be confused with Polari), they took a bollard.

Our time came, the red flares went up and it was into the staircase – this time watching those fore and aft like hawks, checking that this time no numbnut opened the paddles on us prematurely. I wore my pith helmet and occasionally fired my revolver over the heads of the crowd, just to keep control. Ah, what memories, what memories of Poonah, in about ’43 or ’44.

The small pounds between the lower three locks had, by this time, all jammed solid with boats coming up, and their bored but civically-minded (and warning-shot wary) crews had set the locks for the Cardinal all the way down… we rode a free ride on a stairway not from “Heaven”, but from Grindley. In an hour and a quarter all six locks were done and we slipped through the road-bridge and emerged like something shot out of a plantation bungalow drainpipe in the monsoon rain. At a breath-taking two to three miles per hour…

There are Party-sanctioned 48-hour moorings just through this  road bridge where the  Party faithful may pause and sip gins with it, but they seemed to me to begin in a very silly place, so we voyaged on some hundred and fifty yards and chose a mooring at the end of the run, where we might be less bother. As it happened I might as well not have bothered, since the Harpie-du-Jour descended anyway, shrieking at me about mooring on “lock landings” “swan-necks” (bollards) and “where was she then to moor” with me “taking up all of the space?”

With a subtle, Jedi-inspired gesture of the fingers, I encouraged her (and her “Brasso Palace” and world-weary-looking male companion) towards either of the two then remaining available spaces… Further, I said (I didn’t actually say “further”), further, I said, ‘Madam, these are not the lock landings you are looking for. True engagement with those may only be sought around the bend and through the road-bridge”.

The photo below is “back up the canal”, where Madam ought to have been shrieking. That little blob at the end of the wet bit is the road-bridge through which the Cardinal and I had already passed.

She glared as only a pug chewing a wasp may glare, and she continued to do so. You know the sort of pug – life-long smoker with a lip-pucker like a camel’s anus trying to hit high “C”, the sort that can suck the life from the full length of a cigarette in just one draw. I saluted her. Actually, I did throw her a full salute, there seemed little else appropriate while she continued to shriek. This simple act of obeisance gave her pause.

It was during this pause that I begged her graciousness to a., read the bloody mooring notices posted and, b., cogitate upon the nature of my physical actions during our discourse – I was then still, and had been earlier, in the act of dismooring my moorings, preparatory to moving along voluntarily and with consideration aforethought to faciliate the overflow of the self-same growing queue that madam herself now formed the hairy rump-end of. [Please pardon my dangling preposition, I shall speak to my tailor at my earliest convenience.]

Madam remained unimpressed. Indeed little might have impressed madam, I suspect, short of my picking up her boat and portaging the whole kit and caboodle up the hill and past the queues. Madam, I decided, could call herself Doris and madam could jog on.

In spite of my accommodations the queue in fact grew no larger than was indicated by madam’s rump end, and my entire “shuffling-up just in case” manoeuvre was nothing more than an exercise in the fickle nature of the probability of outcomes under full consideration of Chaos Theory on a windy day.

Still, these moorings have a charm all of their own too…

…although it must be said that anywhere where sheep may safely graze is more than any man deserves. Incidentally, do you know how loud sheep are when grazing? It’s a sound similar to someone tearing out great handfuls of hair. Oh dear, we’re back full-circle to “Madam” again. Perhaps she’s happier today? I do hope so. With luck she hasn’t gone snorkelling in the canal and discovered the hard way that she forgot to take the bung out of the end of the little breathing-tube thing.

So, that was yesterday. Today hasn’t been too much of a soggy mud-pie either, there’s been enough of the sun fighting its way through the clouds towards my solar panels to replace the overnight deficit. My electrical-erg deficit that is, not the country’s fiscal deficit. Let’s not be silly.

The plan is to stay here a day or possibly two, then to mooch on through the fresh assortment of locks and lift-bridges that lay between the Cardinal and Wrenbury. Wrenbury, as far as I can remember, is the place wherein we moored to the distant sound of Westminster Chimes coming from the local church, and I should like to hear them again even if only to synchronise with the long-case in the chart room.

That though is a pleasure yet to come, and today I have much coffee to drink and sitting down to be done. I am good at the sitting down, and have been awarded several rosettes for same at county-level shows.

Here’s a goodbye, farewell and adieu to Grisly Grindley Brook locks, at least for a long while… 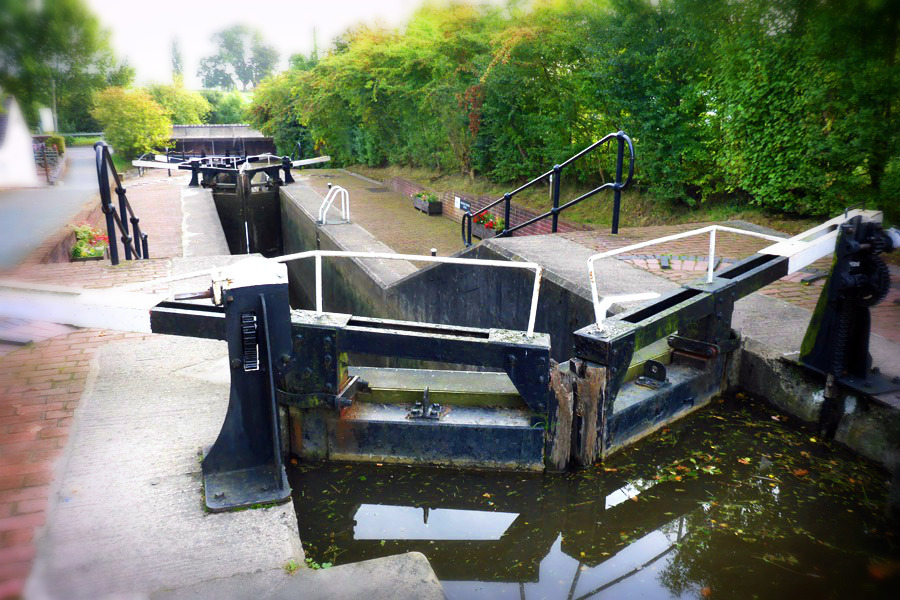 Chin-chin, and so forth.