An Olympic-sized swimmering pool was fitted to the Cardinal overnight last night. My goodness me but did it ever rain. The poor tonneau cover on the rear was home to some eleventy-twelve gallons of rainwater, and all that was required for I.O.C. certification was the addition of floating lane-markers and a couple of unfeasibly well-toned ath-er-letes wearing nought but two grammes of branded nylon and a small sponsorship logo.

The day has now settled into drizzle and into dull and into grey. Despondent ducks are wandering up and down the towpath, idling about kicking stones into the water just to see the splash.

To cheer myself up I’ve been for a walk through the churchyard.

I didn’t go to the churchyard in some sort of schadenfreude exercise to tease the resident stiffs by flaunting my (current, today at least) above-ground status. No, I went through the churchyard because it lies on the route from the canal to Wrenbury’s esteemed SPAR shop, where the makings of an onion and mushroom and chickpea curry were calling to me.

‘Ian‘ they called, like slightly sad, short-sell-by-dated somewhat-over-priced vegetable sirens, ‘Ian… we’re over here…’ and I, being a true gentleman, naturally answered their call.

I’ve mooched to the other side of Wrenbury. Wareneberie was listed in the Domesday Book, but the place modernised and, in the year 1230, became Wrennebury. The name is said (doubtless by idiots) to mean “old forest inhabited by wrens”. Fairly sure that they refer to those little feathered shitehawks, not to the Women’s Royal Naval Service. Do WRENS hang out in old forests? I don’t know, and to be honest, I don’t care. There’s precious little evidence of the “old forest” about now anyway.

So. While still on the former side of town I visited Wrenbury Marina with a small but stout trolley, and therein I purchased a replacement 13kg bottle of Liquid Petroleum Gas, cookery for the use of, for the sum in Her Majesty’s favoured currency, of £23.80 all inclusive. Cookery takes me through mayhap three or so of these in a year, with a judicious amount of cooking performed on the multi-fuel stove in winter.

Wrenbury church has little history, not being built until the sixteenth century (in what was obviously previously some sort of bastion of the wholly godless). It does though boast a rare example of a “dog whipper’s pew”. Dog whippers were – may still be, for all I know of the modern (“modern”) Knee-Benders & Do Forgive Us Our Sins Club – church officials charged with the task of removing stray dogs from church grounds during services. Those employed for the position were given a three-foot-long whip and a pair of dog tongs with which to remove the animals, thus preventing communion bread and priests from being assaulted. Between you, me and the long, cold, dark nights of winter I’m betting that those “dog tongs” were often taken home for some cheering sport with the missus, much in the manner of a Policeman’s handcuffs.

Wrenbury though, to be candid, sets my teeth on edge. Wrenbury makes my brain-bone ache. Wrenbury has prostituted itself so enthusiastically, so willingly, so eagerly to the new gods that I deny Wrenbury anything more than the cursory attentions of my camera. Ancient Wareneberie has been comprehensively subsumed, slathered, entirely covered in screechingly-new housing. Every corner, every nook, every crannie has had – and is still having – bright and shiny and “executive starter-home” “not too big and not too small” houses with conservatories, block-paved driveways and garages crammed in.

Housing where, as each household leaves each morning for work, they check the registration plates on the neighbours’ cars, just to make sure that they are not themselves being outdone in the shiny and new stakes. One does so hate to fall behind with a “16” registration when the “17s” have been out for days…

If the Domesday Book records a town that ought to be Stepford then poor old Wareneberie has become the it of it. Ye Olde Steppeforde.

This is Marbury Meadows, apparently. Well, I suspect that it was a meadow, until Messrs Bovis & Co bunged up three hundred “affordable homes” on its two damp acres. 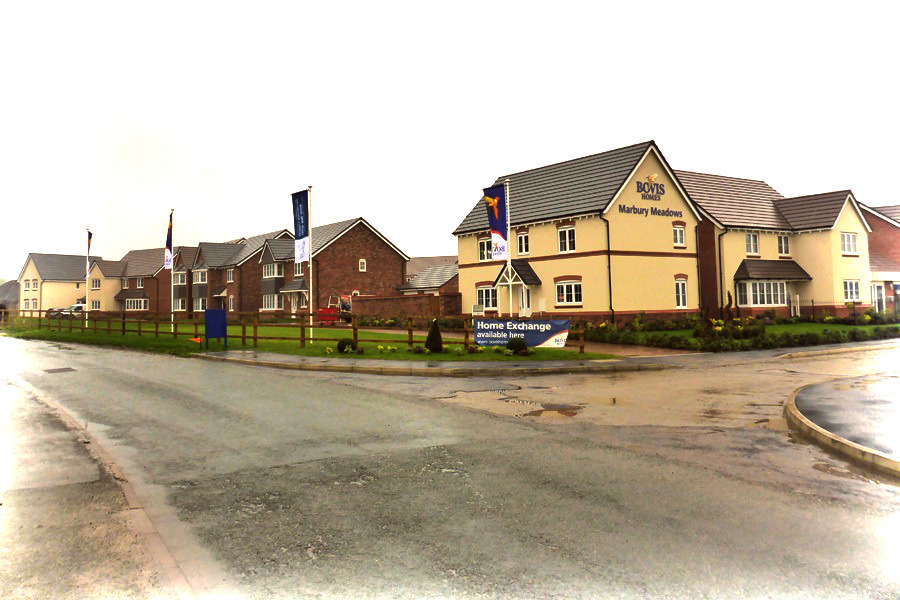 I’m sure that the people who go to live there will be happy.

I hope that they’ll be happy.

Alright, I doubt very much indeed that they’ll ever so much as raise a chuckle again in their lives once moved in. They’ll probably start petitions to have the church bells and clock-tower chimes silenced.

I took the scenic route through the fields to purchase my currying comestibles, but I didn’t walk back the longer, paved route just to get you these photographs and not even to savour the wild-flower ambience of Marbury Meadows. Nope, I walked the long way back because some sod had let his cows out again all over the scenic route, and loose cows and I just don’t mix. 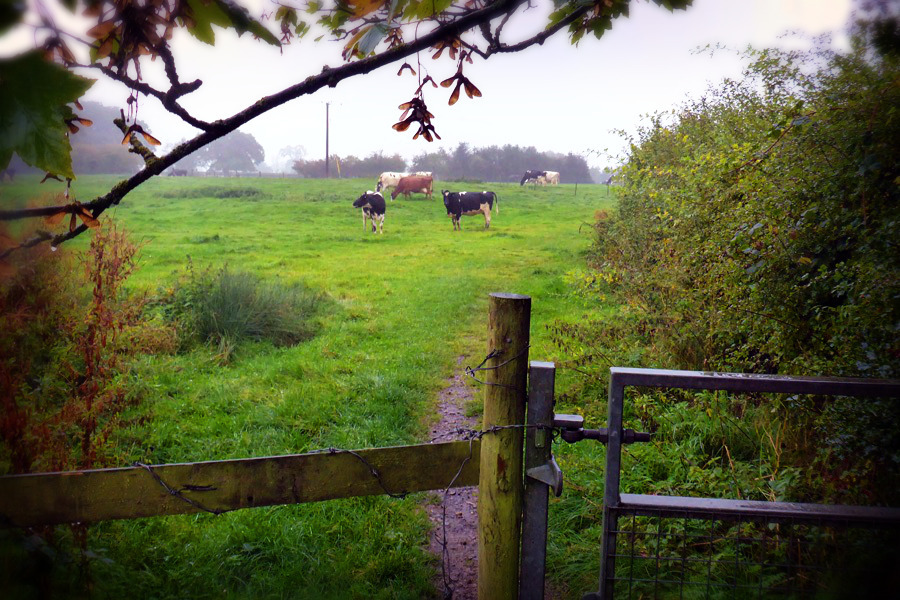 I’m not being a snob, it’s nothing to do with not mixing because of social class or any such. Cows and I don’t mix because in England and Wales each year fifty-six million people are killed by cows, and a further ninety-two and a half dozen peoples are seriously injured. Alright, the figure is about two dozen deaths per annum (per right royal annus horribilis, if you’re one of those with a hoof-mark on your forehead). If you ask me though, two dozen is more than plenty. If I see a cow, I walk the long route.

What concerns me about these two dozen unfortunate stiffs per year is not so much the deaths per se, but who is it that is supplying these cows with the necessary guns and knives with which to kill? Answer me that if you can, where are they getting the weapons? Eh?

I do wonder if perhaps bovine violence would be reduced if there weren’t two pubs in Wrenbury to serve just some eleven-hundred souls (not including the dead; Mr God doesn’t allow them to drink alcohol, drunks tend to slur their hosannas when singing his praises).

There’s the Cotton Arms. Looks a bit “badger’s ar*se gone slightly rebellious yuppie” if you ask me, and I am not going in with good money just to investigate.

For one thing, the place might be full of half-cut cows ready for a fight.

Then there’s the Dusty Miller.

This one looks as though it survived the era of mass pub closures by embracing chicken-in-a-basket and an “indoor children’s area”. Again, I am not prepared to investigate.

Those traffic lights that you can see to the right of frame above are some of the traffic signals that flash and squawk and annoy motorists when one of us rotten boaters presses the button to raise the lift-bridge on the road into Wrenbury. The original miller, dusty or otherwise, would have had a fit.

I got back to the Cardinal eventually, via the cow-free route in the drizzle. As I walked I reminded myself of Nanny’s recipe for “Bloke Curry”. One jar of curry sauce – tick. Mush-er-ooms in abundance – tick. Onions by the sackful – tick. Toh-mah-toes in a bucket – tick. Four bushels and half a peck of chickpeas – tick. Fresh garlic – tick. Fresh chilli – tick. Fresh ginger – tick. Bung in pot, simmer until good and ready.

Curryings. Did, and done. It was delicious. It will also be delicious tomorrow and the day after tomorrow. On a narrowboat (and a pension) one eats what one has, not always what one necessarily fancies. Besides, if I were to eat what I fancied I’d doubtless be prosecuted for cannibalism after the fact with Mary-Alice aforethought, or some other legal term.

These mushrooms had sprung up on the towpath overnight, but I have no intention of eating them. I am always amazed at how quicky mushrooms can grow.

There’s a stoppage waiting for the Cardinal and I up ahead. The very last lock off the Llangollen canal (still some six miles and nine locks from us) is to be closed for a few hours to investigate subsidence and movement in the lock walls.

I’m going to mooch even more slowly now that I know this, and will time our arrival there to be after the “experts” have made their pronouncement on its safety, probably after one or two (dozen) other folk (and their boats) have tested aforesaid lock, too. I see no reason in this case for us to lead our army into battle, we’ll wait a day or two more until the dust has settled. Tomorrow, possibly Wednesday, we’ll mooch on halfway and then await the inspection. Then, and only then, will we be tackling that final lock and out onto the main line of the Shropshire Union canal.

In fact, let’s run the cows through it a few times, just to be sure.

Jarvis? Fetch me the dog tongs…