England doesn’t really do “seasons”. Where other, lesser countries have “spring” and “summer”, England simply takes a little Meteorological Lithium and is merely clinically complicated and precipitately confused. Where some more predictable, less innovating countries have “autumn” and “winter” England simply stops staking the pills and relaxes into pure, unbridled climatological insanity.

We’ve had “dull” for most of the past week. Not your average, “Made in China” dull, but the dullest dullth since Dully McDull invented dull for the dreary masses. It hardly got light at all. There were times when I had to strike a match in order to be able to see well enough to light a candle. England doesn’t care, you see, about a chap wasting two matches just to light one candle, England doesn’t give a fig.

We’ve had rain, too. Oh, not rain such as anyone trapped on the foreign side of the English Channel might know it, oh no. We had rain such as would hammer a chap into the ground if he stood too long in one spot. We’ve had rain so torrential that a chap couldn’t hear himself scream and howl in inclement anguish. We’ve had rain so hard that it bounced back right up where it came from and then fell all over again in some sort of very damp perpetual motion.

We’ve had frosts too, although in all fairness it has to be said that these have, to date, been of little consequence to those indoors with both buttocks pressed firmly against a well-lit stove. 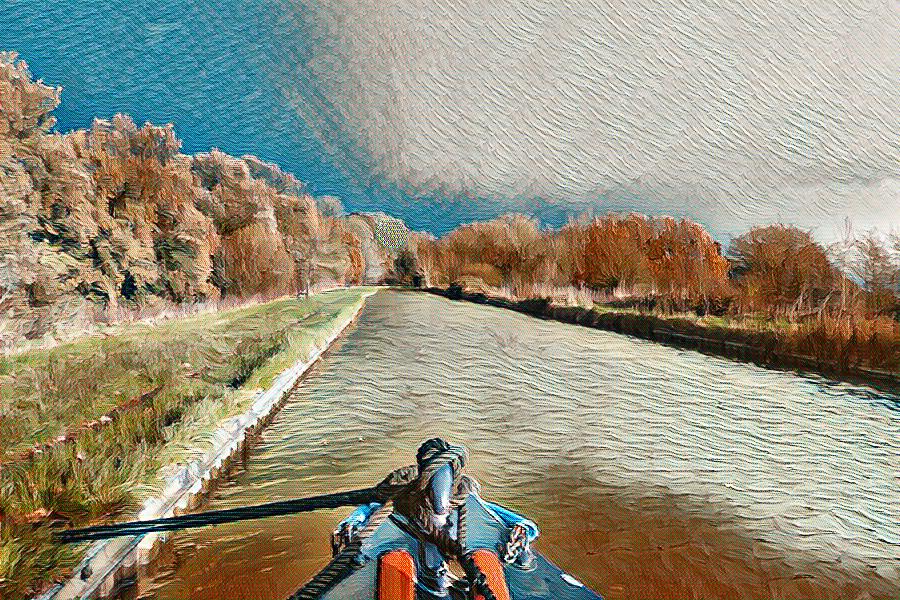 The winds hereabouts today were demonstrably of sufficient force to up-end large but unwary pachyderms. I can tell you that once a pachyderm has been up-ended by an English wind it doesn’t readily get to its feet again.

There have been boats moving on the canals, one or two. “Nutters” is the technical term for them. They’re evidently not, as proven by the simple fact of their moving, the brightest little bulbs on the Corporation Christmas tree. I must confess that even a jaded old (miserable, cantankerous, dour, grouchy, prickly, crusty, crochetty, choleric, sour, bloody-minded, vinegarish) cynic such as myself was surprised late this afternoon, thus, to hear one of my least-favourite sounds – a boat engine to the Cardinal’s blind stern going into “emergency reverse” and “bugger the bearings, con-rods and valvegear, Doris, give me all the revolutions she’s got”.

They missed the Cardinal’s rear end, shot across the canal and then cut in front leaving a margin into which one might have fitted no more than two or three coats of British Leyland-quality paint, aimed themselves vaguely at the towpath and then performed some sort of Satanic ritual involving ropes, rooster-tails from the prop, all points of the compass and a good deal of confusion. I have taken subtle steps in the photograph below to maintain the anonymity of the boat concerned, I feel their pain, I’ve been up Faeces Creek without a paddle once or twice myself.

I often wonder if chaps such as me, myself, and I, and indeed anyone with anything even approaching my own physique (“Greek god”), who has wrestled with a narrowboat in the wind, tamed it and lived to tell the tale, would make good cowboys. There can’t be a “steer” or un-broken Palomino more ill-behaved than a narrowboat in an English breeze. Note to self for possible future career move.

I watched. Of course I watched – schadenfreude is one of life’s few free pleasures, and contrary to the rumours (and evidence provided in several courts of law) I am human.

They got moored and I was just about to return to writing my treatise on the innate uselessness of the overwhelming majority of the species when more excitement hove around the far bend. I refer, of course, to the monumental clouds of smoke visible in the photograph above.

These noxious and particulate “M’aidez and m’aidez me quickly you fools” messages eventually proved to have another narrowboat hidden inside them (who ever said that cracking the code of smoke signals was a difficult business), and it wasn’t so much “coming around the corner” as it was being obviously steered by a physically-uncoordinated  gibbon high on some cheap hallucinogen.

This boat then smacked into the towpath and continued to belch ridiculous amounts of smoke. I, and indeed the crew of the recently-moored vessel I’d just been watching, assumed that a conflagration was underway. I am not generally good in a crisis but here, today, I excelled myself and played my full part in proceedings, flinging a fire-extinguisher over-arm, a la Geoff Capes, into the smoke where I hoped that it would a., not actually hit anyone nice on the head and b., find someone prepared to go close enough to the unpredictable exothermic nonsense to use it per the instructions.

As it turned out, the chap on the boat was rather puzzled, since he always manoeuvred such a fashion, and the belching, battle-field smoke was, he said, the usual result of his lighting his heating stove. Everything was tickettyboo and par for the course, he said.

I have no idea, if such smoke were genuinely the norm, what he used to light his stove or what he then burned in it. Chip-fat and cannisters of WWI Mustard Gas would be my best guess.

At least the wind is – currently – blowing the clouds away from the Cardinal, for which I am truly grateful.

There endeth the afternoon’s fun and games. You never quite know on a canal, one moment it’s all deliciously devoid of examples of the not-me Human species, and the next there’s two partial shipwrecks and a pollution crisis that’ll doubtless see Greenpeace’s Rainbow Warrior moored up behind us by morning. Save the whale! No! Bugger the whale – save the silver from the dining room and the larger of the two Canalettos from the library, they’re the only valuables we have left.

I can’t take this pace, you know, I’m just not built for it. Something is going to have to give one of these days, and I suspect that it will be my mind that goes again. It does, do you see? Two concurrent crises and a chilblain and I’m done for, I sink into Horlicks addiction and terminal gibbering. I’m on the edge even now, just look at me in the mirror (photograph below). If that’s not the face of a man on the edge then my name’s not … um … Copenhagen? No, no, that was the Duke of Wellington’s horse, so it can’t be me. Well, whatever my name is, I’m on the ruddy edge.

Winter, eh? Mother always used to fly south for the winter, but then it was so easy for her, she’d been convinced for quite some years that she was a budgerigar. Caused quite a flap in medical circles, I can tell you. The Civil Aviation Authority were none too impressed the first couple of times either.

Father used to cover himself in goose-grease and have himself sewn into his London club in October, and he was rarely seen out of the metropolitan area again before April or May.

I’m stuck here on the canals, a tiny weeny little fleck of sentient life, sanity’s only representative among the nutjobs and wackos, and I still can’t remember my name.

I think it’s time for Horlicks and a more robust approach to hibernation.

We, my homunculus and I, must move the Cardinal on again in a couple of days, otherwise the waterways rozzers will be after us, and that wouldn’t do at all.

It’s supposed to get quieter on the canals in winter. Quieter they said. Quieter I was promised. Where is my peace and quiet, I ask you? Where?

If anyone wants me, I’ll be under my duvet. No idea how you’ll get my attention though unless you know my name.

Wellington? No, no, that can’t be my name either, that was Copenhagen’s duke.

Does it really matter in the final analysis?

After all, no-one can hear you scream on the canals…