The ice on the canal had mostly melted away this morning, so I decided to salvage what was left of my sanity by moving… being stuck in Church Minshull turned out to be about as much fun as [insert something not terribly fun at all]. In fact, we did a little bit more ice-breaking than I had hoped (I had hoped for none), since while I checked a bridge-distance in front of and behind us, a couple of stretches farther on than those proved still iced, damn it. Still, needs must when the devil drives, and if I stayed put much longer I’d have to get into some sort of bargaining huddle with the Canal Rozzers, and between you, me and the Cardinal’s blacking coat, I’d rather break a little ice. 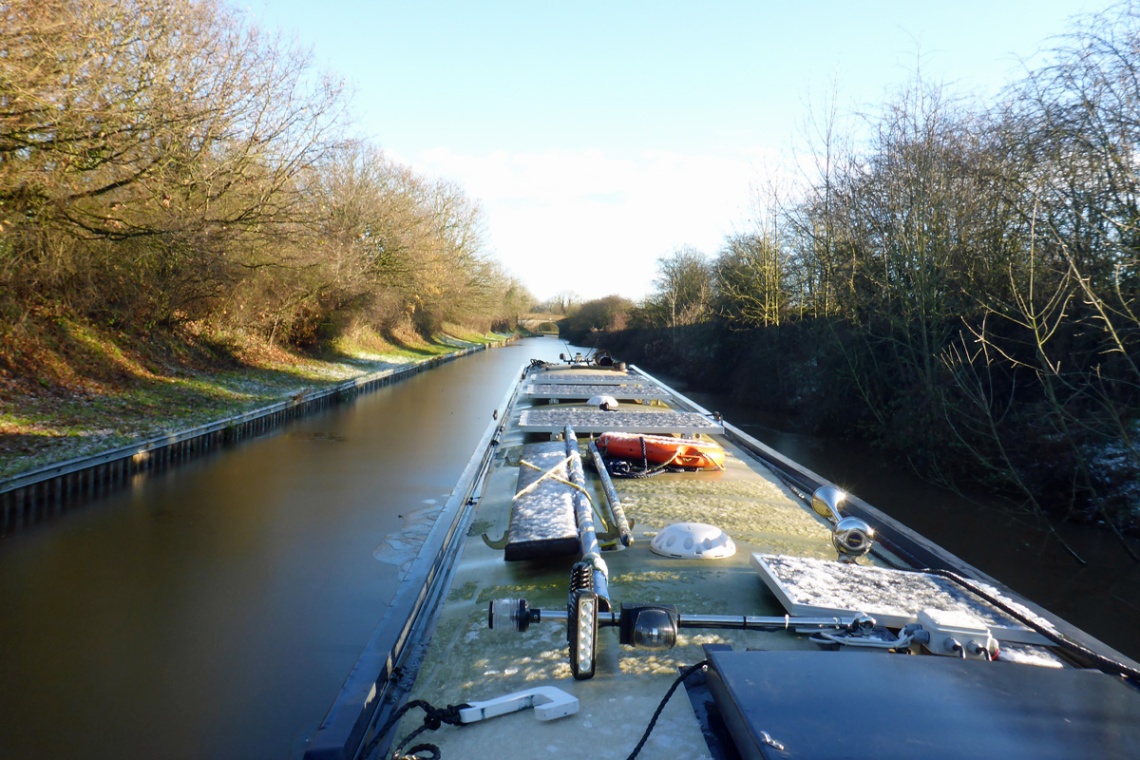 Threaded through the bridge into this section to find a quarter-inch skim of ice. Narrowboats aren’t like cars, you can’t just turn ’em around whenever you want, so no option but to either moor up and wait for spring, or to proceed. We proceeded, and we left our channel behind us… 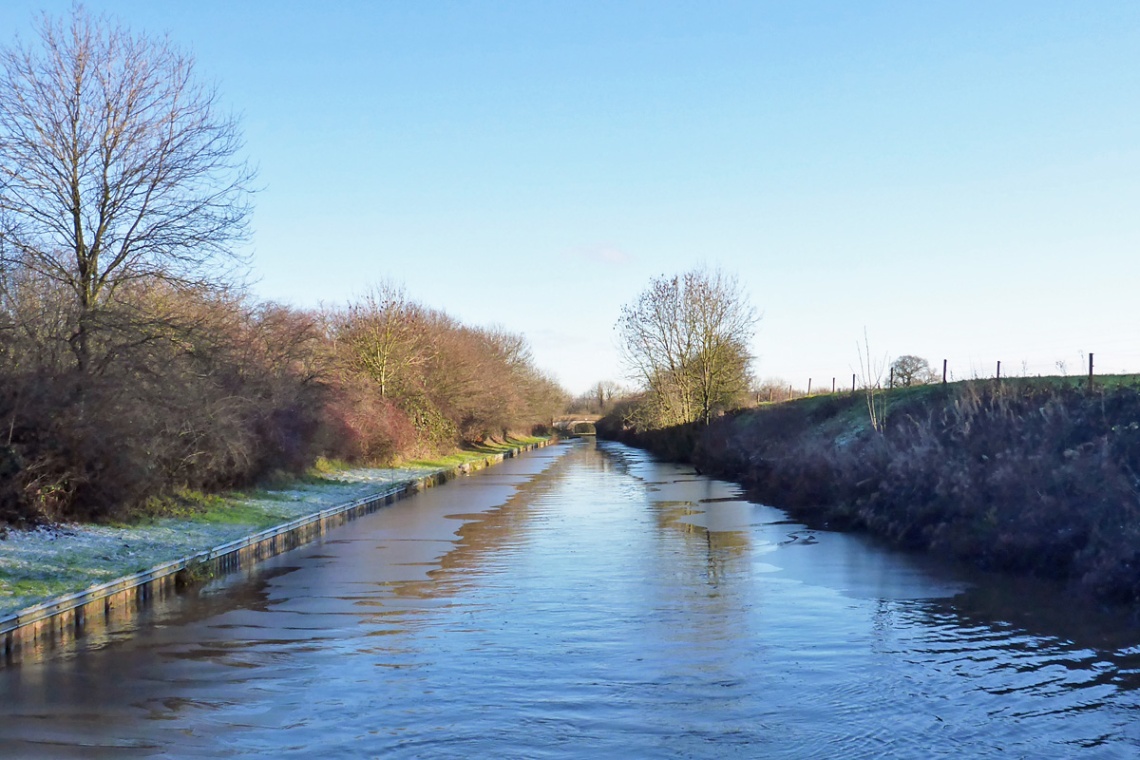 That’s that, I thought. Hah! Not a bit of it – the winding hole then proved to be iced-up too, and some twonk had moored very, very immediately after it, limiting the room to play. It’s an interesting experience persuading the boat to turn while also pushing a solid slab of ice into each bank. My thanks to the Cardinal for managing it with aplomb.

Volte faced we headed back down our own channel between the ice floes and into “oh gosh, this is scenic, what with the blue sky and low winter sun” territory.

Fooled, we was. Fooled I tell you. Look at all of that liquid water.

Well, through the next couple of bridges, just beyond something splendidly termed “Bridge 9 narrows”, was some sort of iceberg. It seemed as though the wind had collected every sheet of ice that it could and had stacked them and let them re-freeze there, waiting for me. We more pushed it aside than broke through it, for which I was wholly grateful (and doubtless so was the Cardinal).

Still, we were doing quite alright, thank you very much. Right up until the last bend towards the marina-with-services that I was heading for. That section is raised up from the fields by some twenty or so feet, and it had wind.

Far too strong a wind for me to consider manoeuvring in the close confines of a marina, surrounded by other people’s pride-&-joys. Prides and joys? Whatever. Boats. Other people’s. No way, Jose.

This “the wind” was blowing off the towpath, which is what are, in inland nautical terms, a bit of a bugger for a single-hander such as myself. You no sooner persuade the boat in to the towpath edge and step off than it’s away again, blowing out of reach. Tis well that I am built like an ageing rugby-player, for a slighter chap than I would not have got his first line tied.

When the wind is as devilish as that and the boat hanging unhappily off the centre-line, a chap would be most unlucky if bow and stern didn’t take it upon their unbalanced selves to disagree, one blowing out more than the other. I was lucky, the Cardinal had his bow to the towpath, the centre-line pulled as tight as a violin string while acting as pivot point, and  his stern trying to run away to sea. So, I tied up the bow solidly – very solidly indeed, got on at the bow, went through the boat and used the engine to push the stern against the towpath while the bow was held on the first rope. Twas then a case of tying off the stern in no seconds flat, before it blew out again.

It worked, and we eventually moored with dignity. I put a third line on, just to make sure that boat, towpath and wind are in no doubt as to where we are staying.

I’ll tackle entering the marina for wotnots and suchlike when the weather is less flatulent. For the moment, here we are and here we stay, stuck up in the air with the wind blowing with mucho gusto &etc &etc.

Nanoseconds after this photograph was taken the sun went in, quit for the day, put on his slippers and left planet Earth to its own devices.

Video, you say? Well, yes, I shot some of my trademark camera-shake video of three short sections of the move – sections when I wasn’t fighting off polar bears or wrestling with Inuit raiding parties. Here it is. You may want to turn the volume down, once you’ve heard one narrowboat diesel engine you’ve heard them all, and the camera was rather with me, standing right over the engine. It’s much quieter than that in real life, far less intrusive, I promise you. Mr Heron flew along with us for some time, one hop, skip and jump at a time. Why do heron always fly ahead instead of waiting for disturbances to pass?

Get ready for some insane velocity…

That’s about it for today. I’ve re-encouraged the stove (often takes the hump while on the move, since he’s not fed and lacks his flue pipe). I’ve steamed a dish of screaming vegetables and sent them off to oblivion, with gravy. Later I shall toast my hobbit-toes in front of the flames, and read something suitable for a blustery December evening – probably a Sherlock mystery.

Cross your fingers if you would, please, for a couple of non-frozen, non-windy days when the Cardinal and I can complete our manoeuvres, go back from whence we came and farther still, towards the bright lights of Middlewich town.

Mission accomplished for today though; we’ve moved, such sanity as I possess remains intact, and I have some semblance of a plan for the coming days. Would probably be greedy to expect more than that.