England and indeed such parts of the “rest of the world” as I have noticed, have this past week continued their headlong rush into dribbling, boggle-eyed insanity. Mark my words, there’s something in the water, it’s the only explanation for some of the headlines.

The heavens themselves have mirrored this Spitfire-dive into the combined cesspools of corruption, rank stupidity and “political” “correctness”. We’ve had frost, hailstones, lashing rain, many, many fine and splendid gales – and a few sunsets guaranteed to make even a grumpy old Hector such as myself utter “ooh” and “ah”.

We motored on a few miles a couple of days ago, the Cardinal and I. Hey, Nonny Nonny, thought I, the speckle-pated mouldwarp shall feast upon the movement with his new video camera and produce much fine footage for the madding masses and the milling throngs to gawp at. I tried, really I tried, but it was ruddy cold and so I was wearing a nice pair of tactical gloves (so that my bare skin wouldn’t freeze on contact with the brass of the tiller arm), and I proved nought but that I cannot operate a camera while wearing gloves. On reviewing my footage I discovered that somehow each time I switched the camera on I also almost immediately switched it off again. This forty-second clip of nothing in particular is the only survivor of my Cecil B. DeMille endeavours.

There’s no need to reserve me a seat at Cannes this year, I’ll send a telegram with my excuses and watch from home on the wireless.

The day I chose for our cruising was just about the only day when the weather played fair, and a single-hander could loose his ropes with some confidence of being able to regain the towpath once cruising for the day was done. It was touch and go though, the wind was picking up when we, the Cardinal and I, moored, and I was called upon once again to do my famous “rugby prop-forward heaving on a centre-line” impersonation. 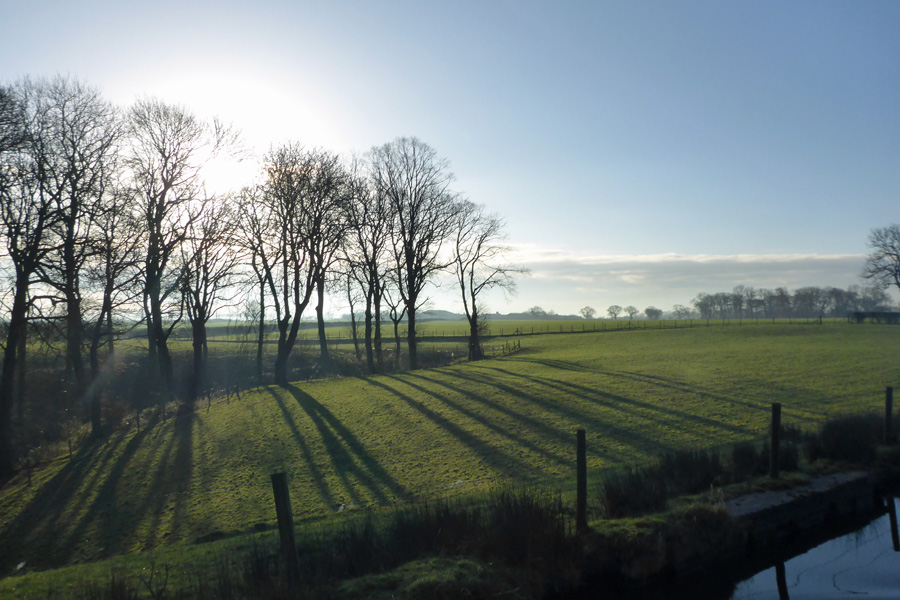 Still, you can’t beat a bright winter day with a low sun and a screamingly clear blue sky. The canal itself was millpond calm, right until I needed to moor up… 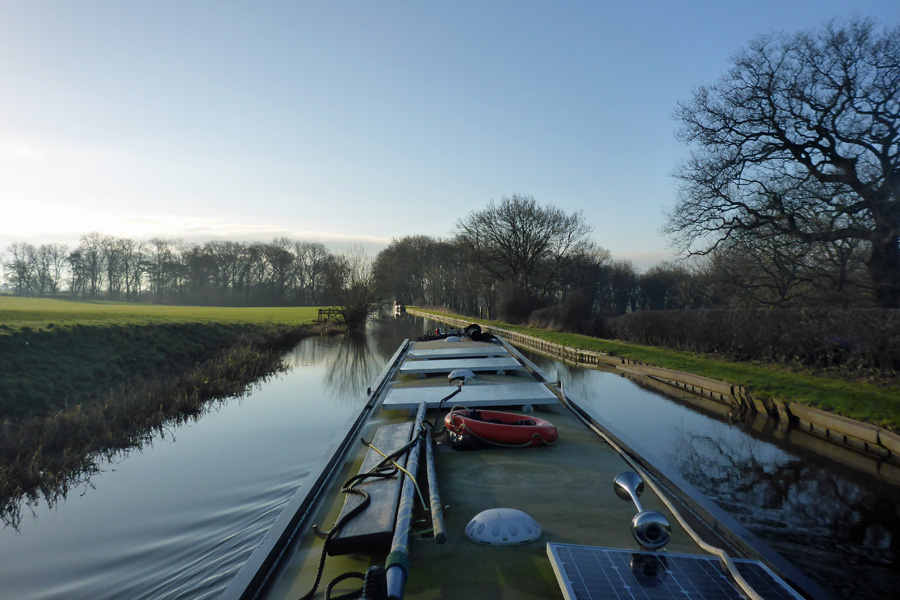 Those little wavelets you can see in the first photograph of this post (right at the top) don’t half make a racket when they get betwixt towpath and boat and find themselves trapped. Between the slap of the water on the hull and the gently howling gale singing me a lullaby as it rocked us hither and thither I needed no persuasion to enter the land of Nod that night. Mind you, I rarely do. I can often remember getting into bed, but I can rarely recall actually putting my head on the pillow, I’m generally gone well before the old wig-stretcher hits the Egyptian cotton. I can’t ever remember closing my eyes to sleep, I just sort of “pass out” as I pull the duvet and blankets around me.

It’s the same with anaesthetics – count backwards from ten, Mr Hutson… and I’m gone before I begin with ten. I have come to the conclusion that my natural state is “unconscious”.

It certainly was so during my drinking years.

The fuel boat called again today with more coal. I mean, I asked them to, it wasn’t a spontaneous delivery or anything. Coal and a couple of sacks of kindling. If I am remiss in my routine of tending Mr Stove then the only thing that will improve his mood once more is to snack upon some fine young kindling. Mind you, I can’t complain, I’ve used three matches so far this winter, and two of those were in October when I set light to the first load of coal (and it’s been aflame ever since). It is unlikely that I alone will be putting Mr & Mrs Swan Vesta’s children through university.

On the way to these moorings I stopped off at a nice, posh marina en route and I did clever things with the contents of the Elsan cassettes, bunged a hosepipe into the main water tank and bade some cove in grubby overalls to “fill my boat’s tank with finest red diesel, my man, and keep the remainder of this shilling for your troubles”.

There was a lady – by her accent, of colonial extraction, the colony that forgot its manners and snubbed dear King George – and her narrowboat already occupying the service pontoon when the Cardinal and I arrived. Since fifty-seven foot and eighteen tons of my boat and I were already within the narrow confines of the marina when I discovered this I had to come up with a Plan B on the spot, so we stuffed ourselves on a “sales” pontoon opposite and waited.

It also seemed to be my day off from “involuntary situational comedy” and it was the poor colonial lady instead of me who, this day, made the most monumental cock-up of leaving the service pontoon. She got her boat jammed sideways, stuffed up against a very shiny-looking boat at the bow and stuffed under the pontoon to the stern, having left herself nowhere to go.

I looked schadenfreude in the eye and denied him, remembering that there but for the grace of gee whizz and a week last Tuesday usually go I.

Her “in a flapness” was complete and total. I asked (in sign language) if she would like assistance and received an affirmative (the assistance was therefore consensual, and not boat-assault or the placing of hands inappropriately on a gunwale), but that was the end of communication as we know it. When I suggested a touch of forward or astern the poor lady just kept shouting that she “didn’t have a bow thruster”. I did wonder if, in the current social climate, I ought not to have called a Police Constable and had the lady arrested, charged, found summarily guilty and executed for engaging in unwanted innuendo. What is sauce for the goose, &etc. Anyway, although I blushed a little, I let the matter drop.

I pushed, I heaved, I grunted and we eventually got her freed and on her way again, after which I could push, heave and grunt my own boat sideways into place for our turn at the various taps and nozzles and …things. I moved the Cardinal sideways on his ropes, and being that day in a good mood, he co-operated cheerfully.

The [Greek and Roman] gods were with me still, and my diesel purchase came to about a guinea more than was required to qualify all of my other activities (water, rubbish/recycling disposal and gazunder unmentionables) to be “free”. Result!

I’ve done exciting things so far on this fresh mooring. The laundry, for one. Of course, when I say “exciting” what I really mean is “about as boring as watching a politician trying to think”, but laundry (when done in a manual twin-tub on a boat) is a job that feels great to have done, once it’s done.

I’ve made bread. That evaporated in a whirlwind of toast and Marmite, as usual, even though there was only me on board. No idea how that happens, it’s some sort of paranormal phenomenon. It all begins with me burning my fingers as I slice up the loaf while it’s still too hot and steaming from the oven…

The wind is howling again as I type this. We’ve been promised some more winter sun tomorrow, and I have my fingers crossed. As well as wanting my solar panels to be able to feed I am myself in need of some warming of the hind-brain, some cheery brightness to ward off the Seasonal Grumpy-Git Disorder.

So that’s that really. All very domestic stuff and nonsense. I am sorry about the video, I shall work out some different tactic for the next move. One where the camera stays switched on would be good.

Ho hum. I shall try, I promise that I’ll try and I can’t say fairer than that, can I?