For the past couple of years I have been using one of my bandanas as a cover for the Cardinal’s instrument panel, the better to shield the varnished wood from the ravages of the English sunshine… and it took the Bro this week to point out to me something that I had just not noticed afore.

Spot the deliberate insult contained in the design and printing of this Union flag. Answers on a post-card please. I respectfully and peacefully call for bloody and violent rioting in retaliation*.

*Retaliation is a small village in Berkshire.

😉 – and others of the “e-moticons” (See? I can do the modern-speak too, just as well as any trendy metrosexual hipster groove-thang monster can).

It’s been a week that was, in this, the week that just was. What it was, I have no idea.

There have been …kayakers.

Between you, me and the nearest gatepost on the local rat plantation, I do wonder if these cheerful, healthy, souls looked long and hard at the state of the canal water before they decided to have some fun splashing it all about, Henry. The last time I saw water like it was when it came around to my turn in the family’s tin tub in front of the fire, during our “oh gosh – it’s springtime” bi-annual hose-down.

I was the youngest child, so my turn was after the dog had been shampooed.

There have been …geese. Canada geese, all one family, and I have named them “The Waltons” (because the U.S. and Canada are one and the same thing, aren’t they?).

The naming ceremony didn’t go well. Oh, I provided champagne and everything, but it appears that if you hit a canada goose over the head with the bottle while saying “I name this goose John Boy, may Mr God bless all who sail in him…” it all gets a bit messy. 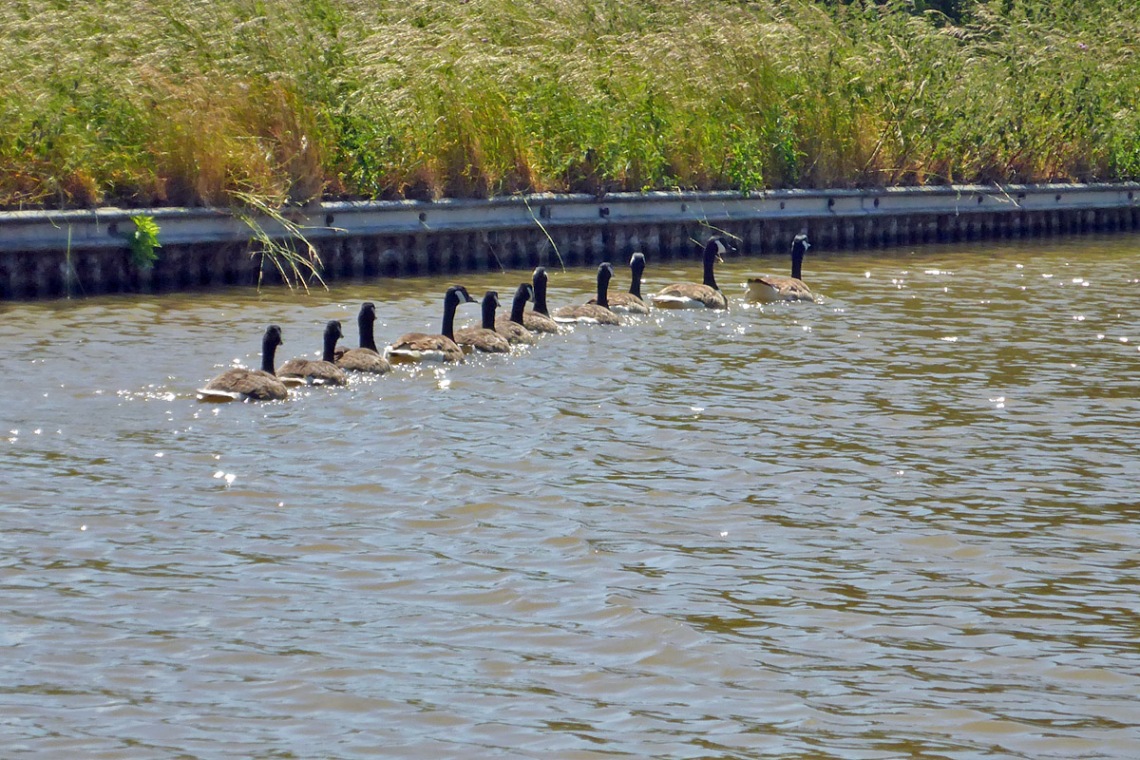 …and we get a nice, neat convoy that is easy to protect from submarines.

At other times they are a bit chaotic…

One thing that I have noticed about geese is that they don’t consume enough bulk in their diet to account for the vast amounts of goose-poop that they produce.

The new, additional solar panel has now been wired in to the new configuration, and I have palpably more of the electrickery to play with.

The revised stove-flue surround is well on the way to being finished.

Hutson Minor Hell is predicted for the coming week – temperatures into the eighties of the Fahrengezundheitings. I’m terribly sorry, but I just don’t function at much over sixty-three of the Imperial degrees, weather in the seventies and eighties and beyond just wholly destroys me. I can’t move, I am not a happy little bunny. In fact, I become a very, very, grumpy old Hector.

One morning soon, possibly even this morning, if  I can raise the oomph, I mun mooch on back to the services for water and serviceable wotnots involving processes that you chaps don’t want to know about, mayhap a spot of diesel, and thence on to moorings where I may grouch and groan and witter generally about the “bloody weather”.

It is also high time that I logged on to the Canal and River MisTrust’s website to have a look at their proposed winter stoppages, to see if there is any worthy route open for me to lose myself in later in the year. I needs must travel farther afield.