After the encoldinations followed by unexpected heat-ups of the previous few days, today too dawned on the “oh gosh, where are one’s slippers” side of 49-°F by some significant margin, and then morphed into the high 71+°Fs with undue haste. The sky has been blue, the turds have been bittering – I mean, the birds have been twittering, and there has been so much boat traffic that I wondered if there had been government orders, and people brought in by coach.

Naturally, I decided to sweep the Cardinal’s stove flue. 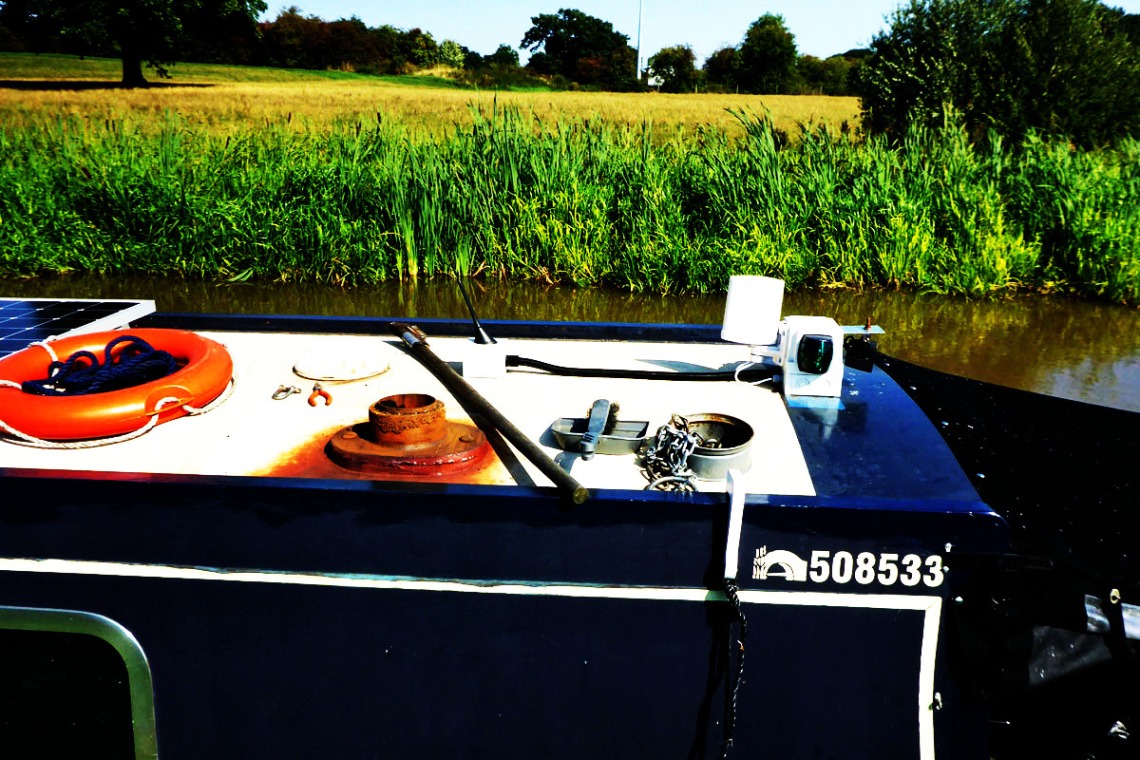 I am fortunate with the Cardinal in that his stove flue is straight up and down, no kinks, no bends. Several techniques may therefor be employed to good effect.

The first of these are “The Chains of Office”.

I string two mooring chains together, lower them down the flue pipe and rattle them around for half an hour, avec mucho gusto. It is important when rattling chains to remember to keep shouting “whoo whoo whoo oooh whoo”, just in case anyone walks past on the towpath. That way, you can explain that the dog is afraid of ghosts and you’re just being mean.

The next step is the “Toothbrush from Hell”.

My wire-brush always looks the worse for wear after he’s been Duct Taped to an old boat-hook pole and scrubbed back and forth, up and down. I doubt that I’d look any better myself after similar treatment.

The pole is none too chuffed about it either, but it must be done. 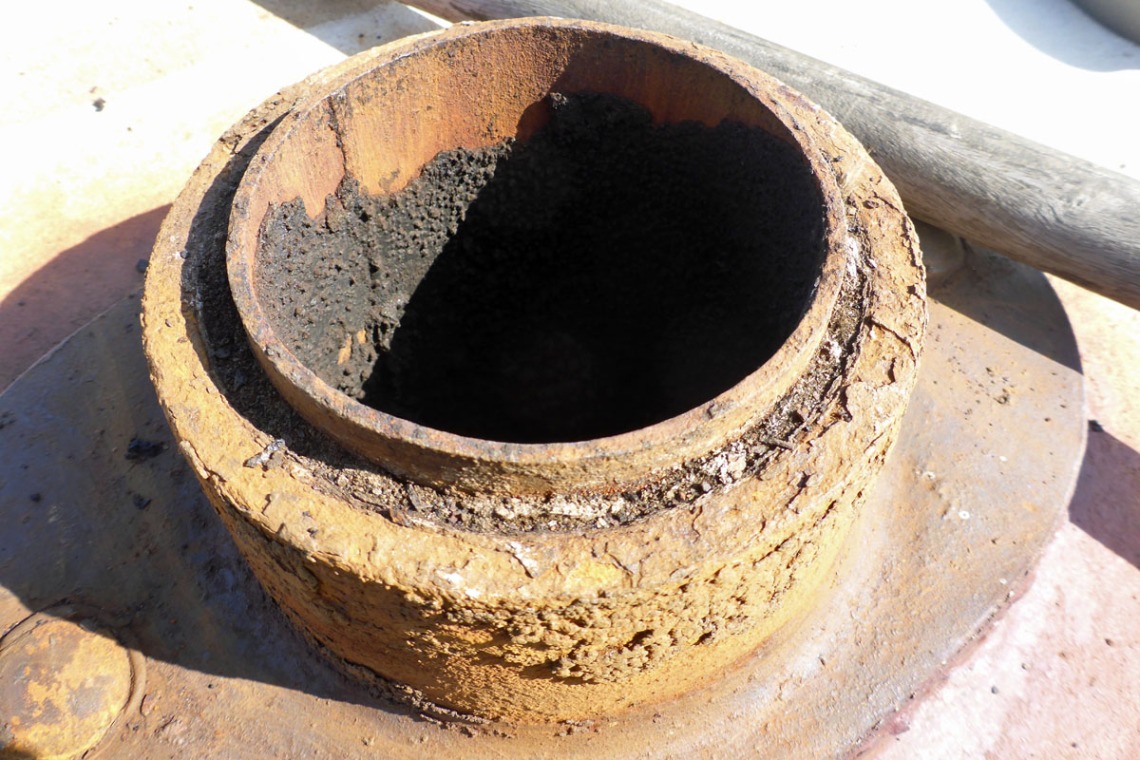 Then I tape a trusty old plastic scrubbing brush to the pole and put on the polish with a final broggle out.

The last step is to go inside, put a sheet of white paper at the bottom of the flue, then go back outside and peer down again with Mr Torch. The white paper lets me check that all is open and clean and free-from right down to the stove end.

I didn’t photograph the indoors half of the process. 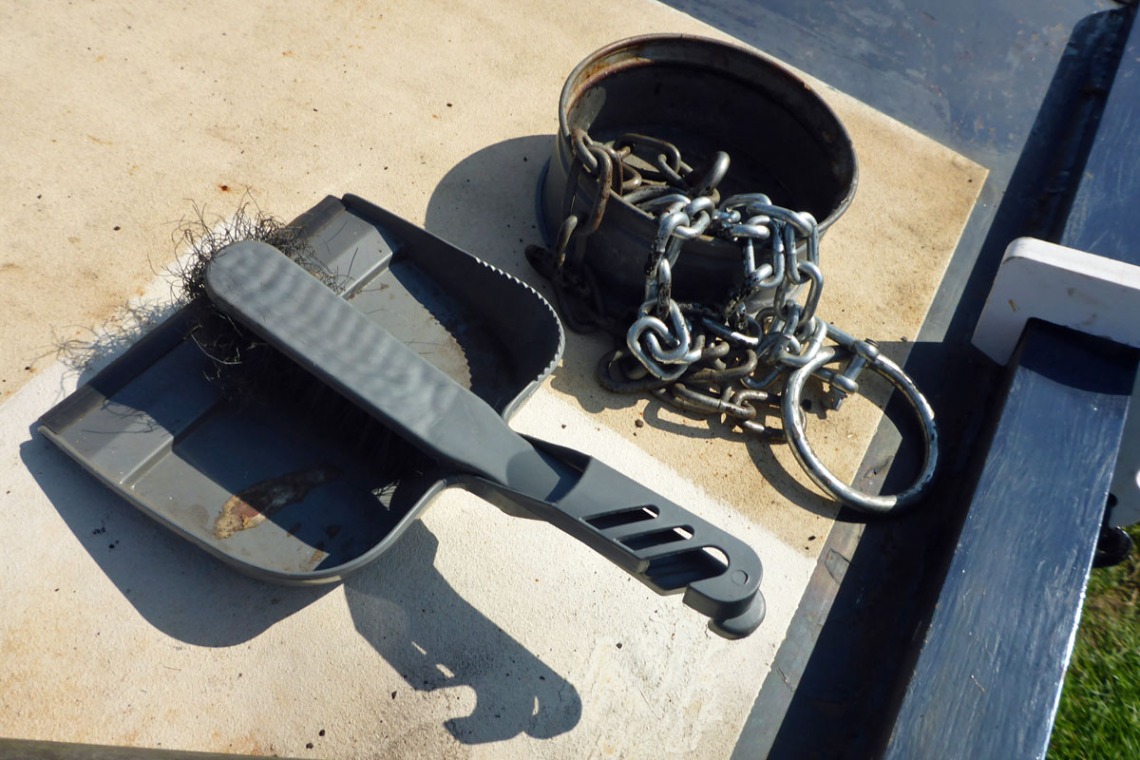 I ought to have mentioned earlier that it is import – v.important – to make sure that the stove is closed up before beginning this job. Other wise you have to vacuum the whole 57′ boat out…

All of the stuff that is broggled out falls, under the tender loving care of Mr Gravity, into the stove. It is then a matter of letting everything settle before cleaning out the stove. The last job is to clean the glass before bunging back the internals.

Job done. Sighs of satisfaction. Sighs is not important [Confucius].

Hopefully Mr Stove – especially with the nice, new chimney pot and coolie hat that I bought him recently – will feel as though he’s just sucked his way through a whole bag of Halls Metho-lyptus. 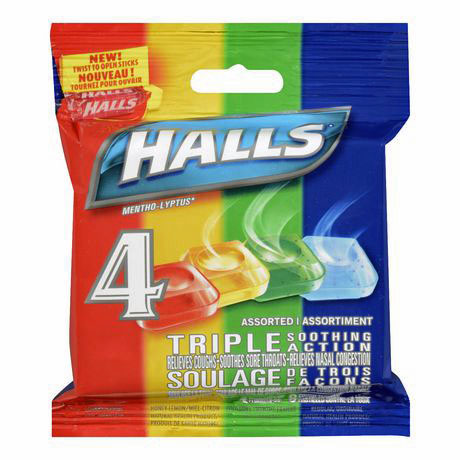 So, what else did I get done today? Well, I opened up and cleaned out a couple of the roof-vents, and then re-sealed them with gloop. I know how to live. Actually, with a coal-fired stove aboard, vents are an important part of living.

With weather such as todays I really ought to have been doing the washing, but there are limits to even a domestic god’s godliness is next to I’ll do that tomorrowness, or something. Maybe the day after that. 😉

Has been busy, relatively, here today. I got invaded first thing by the most enormous black moth – we are talking 8cm wingspan here and a body that you’d have to roast at 200°C for three hours. My catching glass barely covered it. I needed a damned good sit-down after that. Bloody Nature!

The fuel boat, Halsall, came past again, having delivered up to Ellesmere Port and back. They spent a happy couple of hours getting back-ache, reloading at the Calveley Services wharf just along. I would have helped, but I’m not a nice person.

Mr Sunshine brought loads of other boaters out, and the Anglo-Welsh Bats Out Of Hell hireboats are beginning to sweep past from just up by Bunbury. Must. Begin. Holiday. Quickly… No. Time. To. Lose…

Not as much fun as I had though, cleaning out the chimney.

Even after scrubbing them my fingers look as though I have been picking bogies out of a Welsh coal-miner’s nose for a week.

It’s a lousy, rotten job, but someone has to do it.

I’ll give you a clue. I made it yesterday and there’s enough to last me into tomorrow. It owes a lot to a town called “Madras” and I’ll be having it with basmati rice and a tall glass of cold water.

Ought to be reet warm for a while now that t’stove is in ready-to-go mode.