I mentioned in my previous post that the M6 motorway may be heard all over the town of Penkridge, and this is it in all of its loveliness! This is about two hundred yards from the canal. My route ahead for a few miles takes me under it at least twice, and alongside it for some time to come. Looking at the M6 and the frantic, almost savage, cut-throat urgency of those upon it, I rather prefer the canal.

You’ll notice that as with almost all such structures intended for commuting, the M6 motorway has two arrangements of lanes, each heading in exactly the opposite direction to the other, and carrying just about equal traffic. Yes, that means that half of the motorists and their passengers are busy struggling to get as quickly as is humanly possible to the same place that the other half are busy struggling to get away from. Then in the evening, everyone reverses their intent and it all begins again. How can that not be both insane, and a ridiculous waste of time and resources?

It is no way to organise a system for life and living.

The only way to make it any more silly is to require drivers to use only reverse gear on their homeward commute, and to drive backwards in their own tyre tracks…

[My apologies to those of you in “The Abroad”, where you almost all drive on the wrong side of the road anyway, and will not easily notice anything wrong with this video…. 😉 ]

As with all motorways in this area there are huge signs proudly proclaiming that the “highways england”, the Devil’s architect and civil engineers in such matters, are ‘Upgrading to Smart Motorways’.

No idea what the man struggling with the upturned umbrella is doing, but he gets everywhere, poor sod. 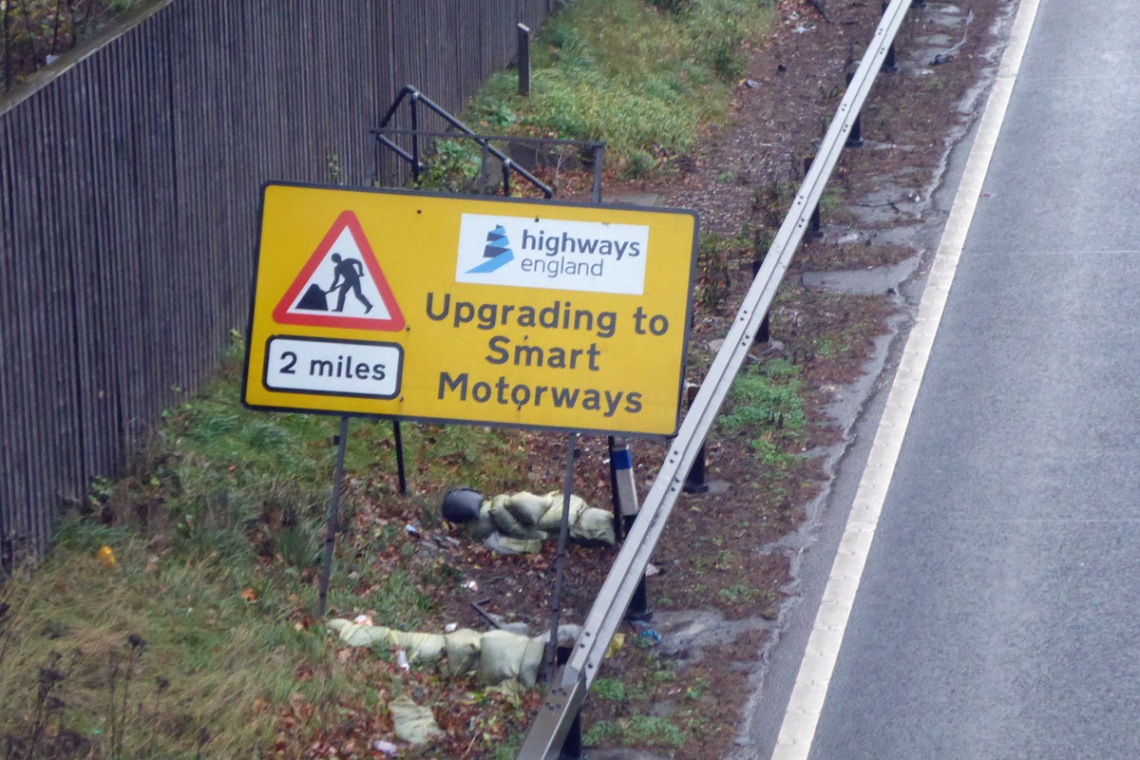 What “smart” actually means in this context is that, whereas the old, presumably non-smart, motorway used to be three lanes in each direction plus a hard-shoulder where a chap might take refuge if his car broke down, and which might be used in times of traffic jam by police, ambulance and fire brigade, the new “smart” [!!!] motorway has four lanes and no hard shoulder refuge, just those little occasional laybys – oh, and a million times more electronic signs and cctv cameras.

This means that with nowhere to go when the old horseless carriage splutters, you will be rammed and killed by the 45,000kg HGV doing 85mph on your rear bumper – but you will have the “smart” luxury of being certain to have your demise captured on the new high-definition cctv. The resultant traffic jam will then cover all four lanes, so your flaming remains will be nought but black ash by the time the emergency chaps have fought their way through to you, doubtless fore-armed with a dustpan and brush.

What utter nonsense it all is!

When I am Lord High He-Who (Must Be Obeyed) this will all change.

Lots of things will change when I am Lord High He-Who (Must Be Obeyed).

I digress, again. I do a lot of digressing. It’s a hobby, and mostly harmless.

So. Anyway. I got a shocky surprise at about four o’clock this morning. Waking and deciding to get out of my pit to go and feed the stove some coal, I rolled up the blind on a porthole. Where I had expected there to be just enough light to reassure me that I and my boat were still moored where I thought we had moored, I was met instead by a blue blaze!

I don’t know if it’s the private moorings opposite, or the primary school just beyond them, but someone has swathed a whole tree and half of a hedgerow in blue LEDs, presumably for Christmas thingies. Today is the oneth of December – as in about three weeks before Christmas ought to begin! We truly are heading for some sort of commercial consumer-spending blur, with Easter (chocolate) blending seamlessly into back-to-school (or something) blending seamlessly into (the wholly imported) Hallowe’en blending into Christmas before blending back in to an early Easter. Somewhere in there is the equally wholly imported “the Black Friday” (which seems to just be about spending, spending and spending, with not a jot of folklore or religion upon which to hang its dubious hat), and an increasing absence of the truly local, truly relevant, worthy-of-celebration Guy Fawkes Night.

[Notable Benny: Officially, the bonfires &etc are to celebrate the fact that the chinless wonder King survived the attempt, but in reality the general population lights the fire and sets off fireworks in celebration of Mr Guy Fawkes – the last man to enter Parliament with good and honest intentions. We light fires because we are saddened by his failure. We wish that a new Guy Fawkes would come and “see to” the current crop of idiots in parliament.]

I am indeed a grumpy old Hector. The entire human calendar may now be defined in terms of relative levels of “consumer” spending. Nothing, no date, is special anymore!

The lit-up blue tree is a very nice sight indeed but, being a boater, I couldn’t help but tut-tut at the expenditure of energy in leaving the things switched on all night… when you live on a boat with no mains hook-ups at all you use a comfortable minimum of everything.

We’ve had a (very) brief reminder of what sunshine looks and feels like here, for which both the solar panels and I are very grateful to Her Majesty’s Meteorological Office. Having mooched on a little we will probably remain here until mayhap Monday or Tuesday, and then we’ll make a headlong dash for the Trent & Mersey Canal. That’s six or seven locks, and about twelve miles as the crow paddles in a canoe.

The comestibles storage baskets are back to brimmed with longer-term gubbins, there is a very decently-sized shopping bag floating about the galley loaded with fresh vegetables. The next task at hand is to meet the fuel boat, Halsall. With both of us moving and moving a la M6 motorway in das oppositen direction to one another (nice mix of old European languages there, Hutson) we shall needs must keep a sharp look out.

I’m going to tie a midshipman to the bow, with orders to keep the binoculars up at all times.

Now, I think that I shall go aft, if you will please excuse me, to watch the rare-of-late phenomenon of my solar panels feeding the boat’s battery bank.

Feed, my pretty lead-acid ones, feeeeed… suck up that starshine.