Purple coal, and emblazoned with a U.S.-style locomotive for some reason!

(The cow-catcher is the clue.)

Perhaps this coal hails from Pennsylvania or somewhere. I remember the days, pre-[bitch-cow]Thatcher, when we used to mine our own coal in this country…

I thought that the chap at the chandlery was making une petite blague when I asked for ‘Two sacks of coal please mister’ and he replied ‘We have two left.’

Then he pointed me to the one sack by the till, and he went to fetch the display sack out of the chandlery window. I kid you not.

The gentleman was, for a chandlerist, uncharacteristically polite and cheerful about the transaction, and he deposited the aforementioned two bags outside on the steps of the chandlery ‘…so that I wouldn’t have to come back in again…’ I was collecting them on the hoof, using Mr Trolley, and thus intended to take one 25kg sack at a time back to the boat. I interpreted his actions as kindness, not as an indication that he didn’t want me to darken his doors again.

This is though, rather typical of businesses in England. Coal in mid-winter, eh? Whodathunkit? You just can’t predict demand, can you… 😉 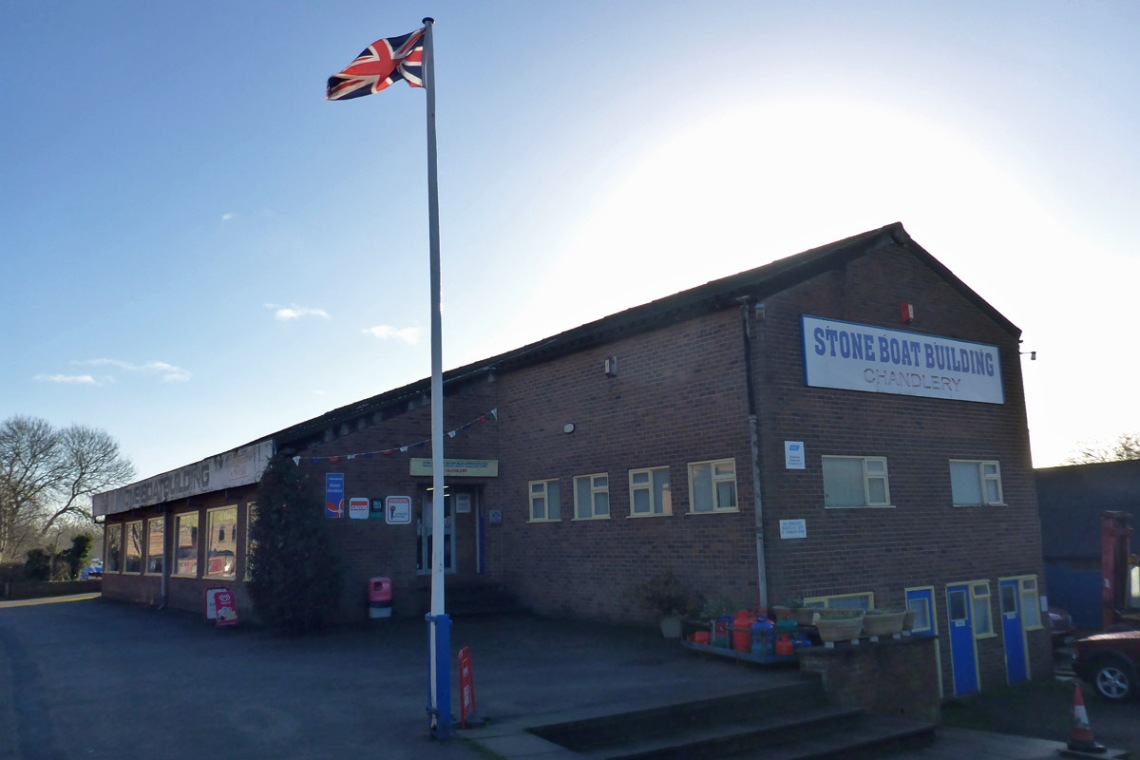 My parents were born in the nineteen-twenties, they saw all that young sprogs needed to see of WWII, including all of the usual privations, and it shaped their outlook on life somewhat, I think. Unfortunately, they passed this general outlook on life down to me, and I find it difficult to close my eyes to sleep unless I have a Plan, a Plan B and a back-up because ‘If anything can go wrong it will go wrong’ &etc &etc. I already had enough coal to allow me to meet up with the fuel boat, Halsall, in good time – but tis mid-winter, and I wanted two bags more please mister j.i.c. (Justin Case). Tis good then that I went to market when I did. Now, if either of us is delayed by ice or by Martians landing or by Norway invading or something equally likely, I have my back-up for my backup Plan B. Those after me shall not be so lucky.

It has been a weird few days here in the town of Stone. The Christmas tree atop the nearby boatyard crane (see previous post) has been broken in two and thrown into festive disarray by the recent enthusiastic winds…

Where once it stood tall and with twinkly-twinkly lights it hangs in a most forelorn manner, and the fairy on the top has been blown to Kingdom Come, or somewhere worse (Belgium?). It dangles there as a gruesome warning to those who have forgotten the true spirit of Christmas. All that it needs now are a few bits of dead reindeer strewn about, a couple of elfin carcasses jammed in the framework and a tuft of blood-stained white fur lodged in the cables.

My perambulations today necessarily took me past Stone’s highly-unlikely grand “Marks & Spencer’s Food Hall”. I notice with distaste and some derision that M&S appear to think that “Food Hall” is a single word and all in capital letters, “FOODHALL”. They’ll be using “instore” next, as though that is a real word too. Ugh.

It seems a tad akin to plonking Harrods down in the Scunthorpe suburbs, but someone somewhere obviously thought it a good idea and the town planners £agreed£. I had a wander around inside with my little wire basket and with permission to myself to lash out a tenner on some treats. Um – to lash out a tenner on a treat (cheap it is not). 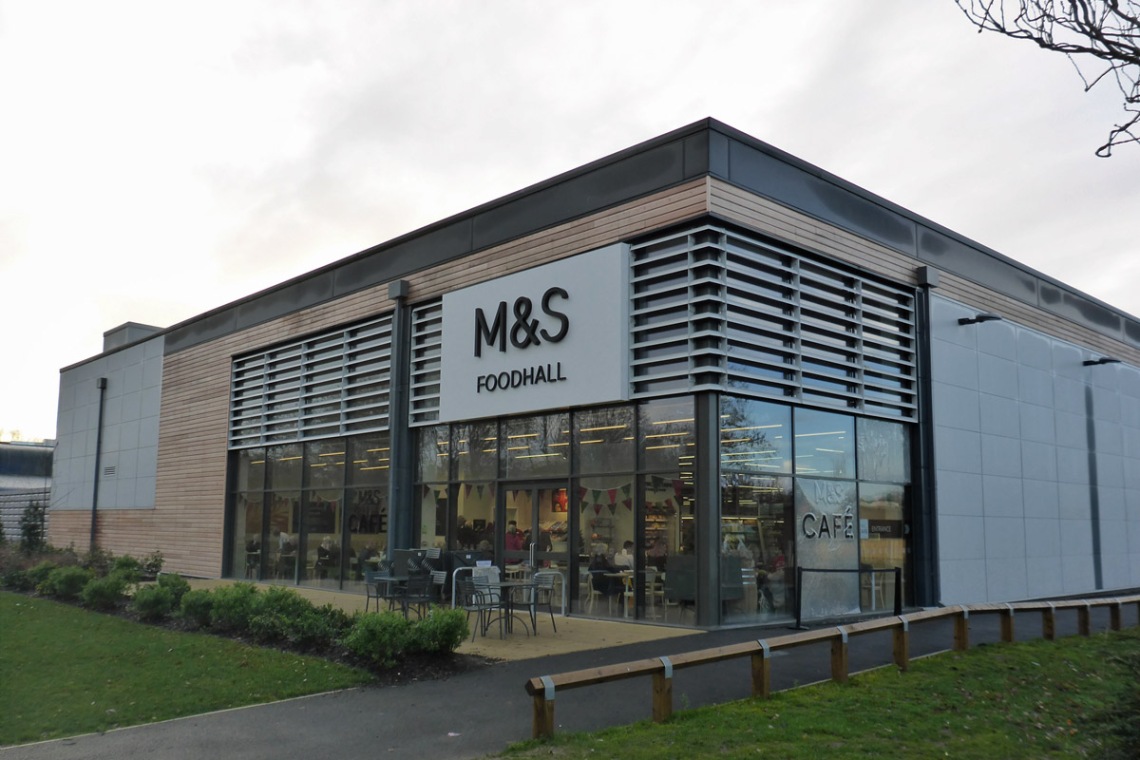 I think that I am getting older, wiser, and maybe sickening for something.

Not one item on the many, many, many shelves looked in the least bit appetising to me, it just looked like over-priced, over-engineered, over-wrapped artificial, hydrogenated tat. I gave up looking, put my empty basket down and walked out again past the suspicious and glaring till assistants. I went instead to the local supermarket, which is what are almost as bad, fnarr fnarr, it being a “The Morrisons”, and there I bought bananas and broccoli and Brussels sprouts and fresh bread and orange juice and sundry similar items instead. There was not so much as a single Gingernut biscuit on the conveyor belt.

I shall regret this, I know that I shall, but it was what(ever) it was and the mood hasn’t worn off yet.

The Cardinal and I will probably be remaining Stoned over Christmas, moving on sometime twixt then and the The New Year, to begin the last leg of this circumnavigation. Shall have to fetch some water the hard way (Mr Trolley), since I am not going to take us back through eight locks (four to go back, four to get here again) just for that. Damn it, Claude, the exercise is good for me.

Rather amazingly, an email popped into my in-tray this afternoon – the Middlewich breach is fixed. Ruddy well done chaps, well done! The navigation re-opens tomorrow, Friday the twenty-oneth of December 2018, something like nine months after the cataclysmic event.

Details and some nifty time-lapse videos here, plus some photographs to remind us what the breach looked like. The Canal & River Trust are still being rather coy about what actually caused the breach, issuing the usual “it wuz a bas*tard boater” and “vandalism” suggestions. I suspect that the money for the repairs hinges on some “clever” semantics, and that they will (that they can) never admit that the thing just collapsed due to old age and having been built on shifting sands.

My current plans – and these are the best-laid mice of men, or some such – will have us back there in the latter part of January. This gives a week or four for other boaters to test the repairs, and perhaps to get the novelty of a locally joined-up canal network out of their systems.

I have had word that the fuel boats are already nudging the lock gates heading towards the repaired Middlewich junction, and are keen and eager (and desperate) to get back to cruising circular routes again, rather than the enforced horse-shoe nonsenses of late. That way they will be able to keep a smooth distribution once more, rather than having to volte face and immediately see customers that they’ve just seen and being farthest away from customers that they haven’t seen for a while.

I’ve never heard the fuel boat tell me that I was buying their last two bags of coal!

The four locks of the penultimate winter closure are before us (Meaford), and we’ll be through those a week or so before they close (when next I feel again like moving). Then there’s a little town to visit en route, Barlaston, and the lovely Trentham Lock, the last of the closures (but not until mid-February), a real treat at 11′ 11″ deep. Then, once the schools are back in session and the wonderful human spawn generally chained to desks in ink-stained classrooms again, it is Stoke on Trent, the Harecastle tunnel, and then the last thirty or so locks to Middlewich. Job done.

This pause in Stone is the better to avoid Stoke for a while, and to let the season roll on and the schools send out the dogs to call in the “little children” once more, thus reducing the horrors for we adults.

Some folk – especially those who don’t actually move at all, generally – do point and laugh at my glacially-paced moochings around the system, but one thing is certain. I can’t be accused of speeding past or of not exploring en route!

Half of the factories (mostly now doing business in fields unrelated to their original trade) are literally slap bang on the canal, because that is how their raw materials arrived and their finished products left. That big old (green) door in the middle of the canal-side factory isn’t there so that the Victorian workers could go fishing at lunchtime without leaving the premises… it’s where they forked stuff out and onto canal boats for delivery, in this case to taverns and inns and ale-houses far and wide.

I call this look “Uber-Urban”.

It is urban on steroids.

Variety is supposed to be the spice of life they do say, but I think I’ll stick to salt, pepper and malt vinegar. Even though I am staying around here for a while more, urban is just not “me”.

So, chin-chin for the mo – and please do try not to let that image of the slaughtered Christmas tree haunt you. Father Christmas lives, don’t let anyone persuade you that he died in a nasty collision with a tree on a crane.