If it comes to it, you can bury me with one hand poking up through the soil too, with two fingers extended in heartfelt salute…

Having spent the best part of the week patronising the bejavers out of me and insisting that “not being able to view any transactions on my account” was all down to “Ian’s slow internet connection” and that there was “nothing the bank could or would do further” – lo and behold, tickle my trouser cheeks with a daisy and call me Doris, the Yorkshire Bank slaps a website-wide notice out to all of its “customers” announcing, you guessed it, that the bank was having technical difficulties showing customers their transactions.

The bank made changes, announced that all was well in technical support world and verily and forsooth, Ian “I’ve got a slow connection” H could once again access “his” current account transactions.

I would like a printed copy of this blog entry metaphorically nailed to the forehead of every patronising, technically-ignorant and obdurate schoolie that I had to deal with both on the “the social media” and on the “the mobile telephone”. Six-inch metaphorical nails please, metaphorically rusty ones.

So that’s one joyful expression of the Establishment out of the way for the moment.

The joyful ALCS expression of the misandrist zeitgeist remains though, in that I haven’t yet had an answer to my email in re a minimum of impartiality in their dealings and in their sponsored events. If I ever do get a reply to that enquiry I will let you know.

Newly arrived on the battlefield are 1&1 Internet, my – “my” – ISP. They reminded me a month ago that the annual fee for services almost rendered would be due soon, but as is the wont of cowboy ISPs (and that is surely a monstrous tautology, since they are all spivs, wide-boys and semi-legalised gangsters), they quoted me no price, and none was available on their website. I wrote to them insisting on a figure. They gave me a figure. The invoice has just arrived, and it is three and a half times MORE than they told me it would be.

Fetch the trebuchet and the basket of dead cats, Baldrick, and my best and biggest Kevlar codpiece, we’ll be going into battle once again with yet another faceless corporation.

It’s never straighforward (or honest), is it?

I can’t decide whether our politicans behave as badly as our companies or vice versa. Indeed, are they even separate things these days? The only certainty really with both of them is vice, and total versa when it comes to competency, morality and humanity.

So, canals and canal stuff.

It’s been splendid here for most of the time. I’ve watched the world pootle by (although some of the boats going past were obviously Emergency Services attending raging fires and medical dramas, given their speed) – and it’s all been as ugly as ever. There was a queue the other day at the lock by Venetian Marina, five boats to go down, two to come up. There were no fisticuffs, sadly, although there certainly will be before the “season” is out.

As the towpaths have been drying out I’ve been steadily increasing my perambulations.

Yesterday morning was misty and moisty but not quite foggy, and a stroll up to Barbridge to dispose of my refuse was most pleasant, at six of the early o’clock. Barbridge was virtually denuded of boats, very unusually. A couple near the pub and two on the VMs north of the junction. Most odd indeed, given the clemency of the weather and the temporal proximity of the three-week “day release” of the Spawn of Hell (school holidays). 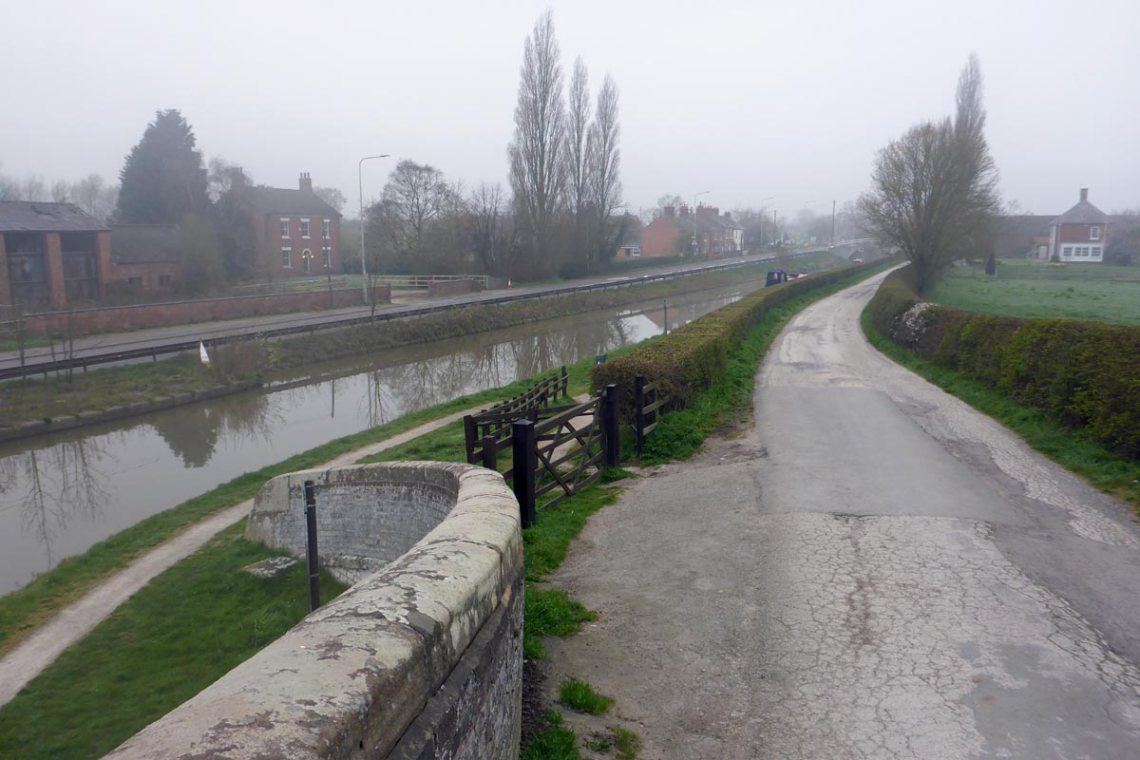 The site of the abandoned/torched pub opposite Barbridge Junction has, while I’ve been away en-cruising far and wide, been placed in the hands of the “property developers”. Doubtless there will be eighty or ninety examples of minimalist-floorplan ticky-tacky architecture thrown up there in the coming months. I bet that they give the little estate some sort of twee canal-related name, like Bargee Fields, or perhaps Narrowboat Views. 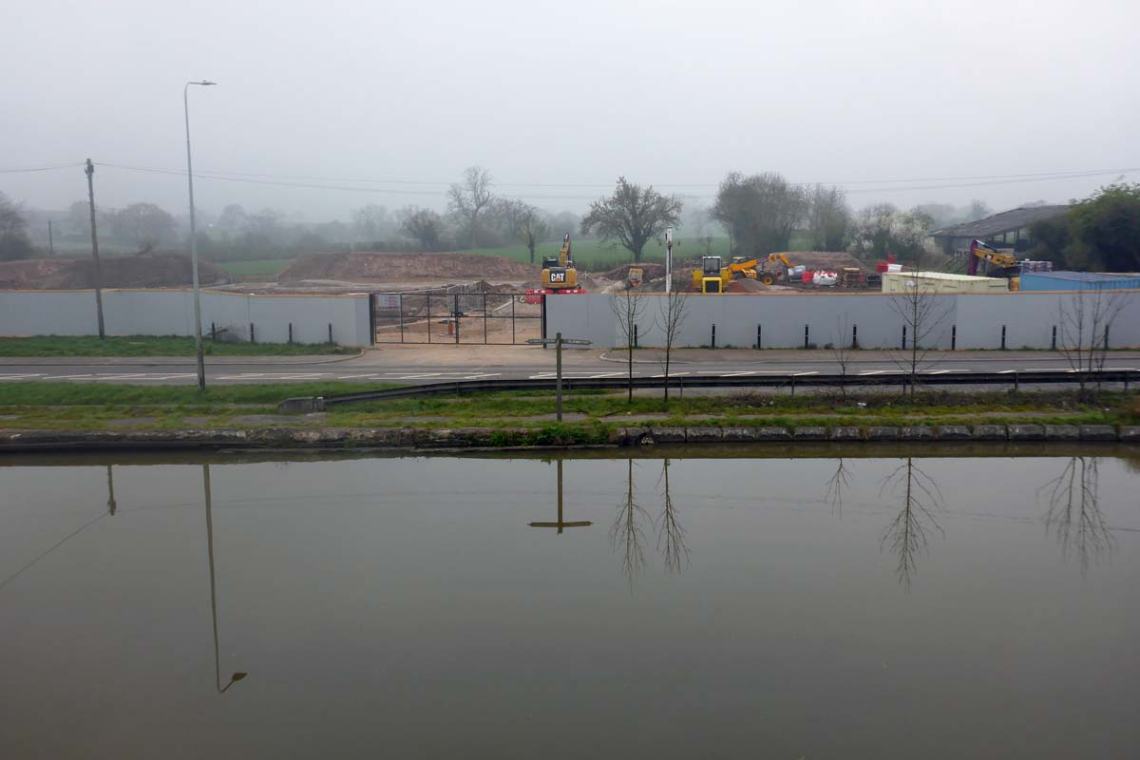 It is all most depressing. When will this building cease? When all of the planet is under brick and tarmac? Once again I am at odds with society. Everyone (else) pronounces the word “eugenics” as though it is a “bad thing”. I shall place myself even further out of step by using the phrase “sterilisation programme” and reminding everyone of E. F. Schumacher’s wonderful treatise on limited resources versus constant expansion (and constant population increase on a finite planet).

Stop it, people, put it back into your trousers and/or keep it out of your pleated polyester skirts please, before it’s “standing room only” – or less.

We mun move again soon, both because I want to and because the “winter season rules” expire today. These rules are in fact free license to ignore the (unlawful) extra restrictions imposed by the Canal Rozzers, when almost all – but not quite all – 24-hour, 48-hour, 3-day, 4-day, 5-day and Greek & Roman Gods alone know what else limitations may be regarded as being the (legal) 14 Days in any one place of the 1995 Waterways Act. In short, to wit and not to put too fine a point on it, I’ve been on what in “season” is a 48-hour mooring for about ten days now… so must move tomorrow or the day after.

Where to go, where to go? Well, not far, I am not yet in the mood for (more) wild travels 😉 and will be mooching on but a mile or three at a time until the fever comes upon me once again. Besides, with the Spawn of Hell (school children) on the loose (half-termish/Easter) I won’t be mooring in any towns, town environs or areas frequented by townspersons until the recall bell sounds, and we adults are safe(r) once more from the savage young beasts.

The “The Government” (such as it is, more like the cast from some failed-on-the-opening-night pantomime) put all of our clocks forward by an hour last night. This means that if I want to move at the break of day I’ll have to set an alarm to wake myself. This messing about with the clocks doesn’t produce “jet-lag” exactly, it’s more gentle an effect than that – sort of “hot-air balloon lag”, while the body adjusts to the interference.

I think I’ll set that alarm, and see if I am in the mood to move at first light.

Shall we still have light after Brexit, or is the sun still shining on the wreckage of England not part of any of the deals?

I shall make a cup or two of chai, and read an encouraging book. That’ll cheer me up again.

Chin-chin for the mo, chaps.