Having risen this Wednesday morning at sparrow-cough o’clock my first task of the day was to scratch my brains and then totter through to the main cabin to cajole Mr Stove with some fresh phlogiston into a more enthusiastic exothermic modus. There was daylight enough, just, for me to see this morning’s frost forming. The towpath grass and springtime flowers (yellow things, several species, miscellaneous) changed from overnight damp to crisp, white and “please don’t stand on me while I am in this brittle state”.

The Arctic blast may as well have been the result of the corpse-cold spirits of politicians past, present and future passing by, leaching the warmth and joy from everything as they go. TBH., if the flowers think that they are living in a “brittle state” then they really ought to give being sentient and living in England a go…

I am glad indeed to have had a visitation of an altogether different sort yesterday evening, from the stalwarts of the Fuel Boat Halsall, whereupon I refilled the Cardinal’s coal cellar with combustibles.

Indicative of the outrageous circumstances of our “interesting times” the LP Gas bottle expired as I was half-way through cooking up Pasta a la Albion avec le surfeit du garlique et mucho-mucho green olives. Ordinarily gas bottles expire only once the opportunity to replace them quickly has passed, but this one was the exception that proves what a state we’re in. Never before, for me, has a gas bottle expired at so convenient an hour, just afore the Fuel Boat was due…

Four bags of coal, one of the “the kindling”, a bottle of Gazunder Blue and 13kgs of LPG in a suitable container if you please, please. We traded in the dark under a thin, waxing crescent moon. Nay bother for me, but at the end of what was certainly a twelve or fourteen hour day for the crew of Halsall, boating about and humping coal over the public gunwales, less early an end to their labours than they might have hoped for.

To wit and to cut a long story short well after it has already rambled on, there are supplies enough to keep Mr Stove lit for as long as these damnable overnight freezings of April last – probably until June.

Monday, however, was an entirely different kettle of fish, dawning merely on the cool side of “Nanny, I want my duvet and I want it now“, and with a light and moisty mist remaining, distilled from the more noxious Night Vapours. 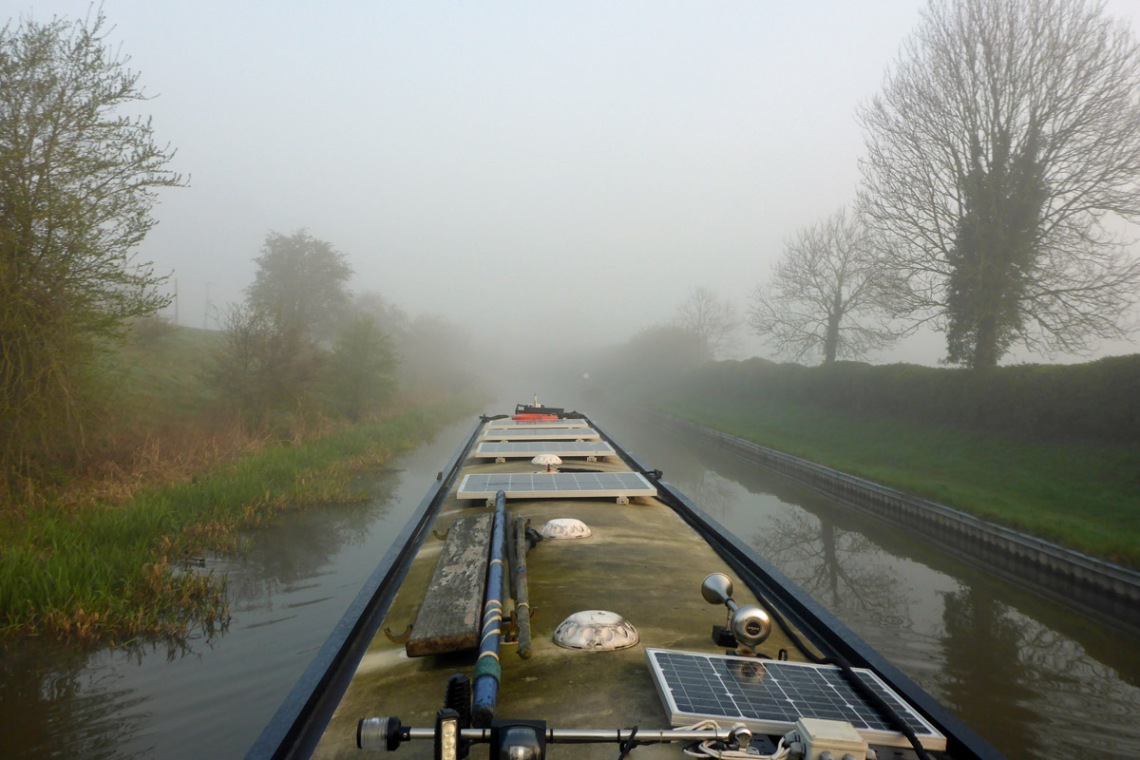 The Cardinal and I went boating, a couple of pleasant miles, then through the CaRT service point at Calveley, onward to the next winding hole at Bunbury and back the way we came, re-mooring a few yards from where we had begun, albeit necessarily facing in the opposite direction to hitherto. “Hitherto” is not a boat, it is a scientifical term relating to the temporal and spatial disposition of our moorings prior to these, our current moorings as changed by our watery peregrinations since hitherto. It’s all very complicated. Space, Time (and Nathaniel) often are.

We’re quite legal and safe from the lash of the Canal Rozzers on these Almost Hitherto moorings until Monday next, and there is interwebnet and a distinct lack of being on the way to anywhere from anywhere. The latter is important because the  schools have let all of their  “children” loose for a week or three, and I do like to be moored in places too far from drug-dealers/cigarette shops/pubs/courts/probation offices for the unfit little part-formed humans to stagger. There’s less bother this way.

So, a cruise-ette of some four and a smidgen miles, eh? Indeed so, and I remembered even at that insufficiently-caffeinated hour to bung the “human-senses light spectrum video recording device” up on the sprit topmast, just below the lateen piddle-poddle. Nine and a half headlong minutes to you from four-engined take-off just beyond Barbridge to foamed-runway frantic landing at Caleveley, a tad longer for the Cardinal and me. Test yourself, see if you can take the stress…

I have cut the longer stretches of same old same old rotten English countryside because I know that some of you have various heart-conditions and I am not insured for velocities greater than two and two-thirds Imperial miles per Empire hour in the forward direction.

The field of sleeping JCB-osaurs and Diggers-Rex is just after the first bridge hole – in itself a delight of a blind s-bend passing under the mighty highway from Rush-Hither-Senselessly to Let’s-All-Rush-Back-Again-ville. On the return trip these roaring, clattering beasts were awake and were busily consuming the living and the green; yet another enormous swathe of countryside about to be laid to rest under, I suspect, tax-payer subsidised Industrial Scat, although I may be wrong and it could be several hundred tax-payer subsidised “the affordable housing yes indeed Myffanwy” ticky-tacky.

When all of England is covered in brick and tarmac and the stinky spoor of the shared-equity mortgage from coast to coast will the current laws-of-physics-defying attempt at limitless, frantic growth stop? I doubt it, the process will just begin extending the old coastlines by piling fresh human rubbish and filth out to sea, and then building on that. When those sink because the foundations have composted then fresh rubbish will be piled on top again, and a new and sillier wave of ever-smaller houses will be built, for ever-larger people to squeeze their lives into so that they can commute and generate corporate profit and personal tax and make multi-millionaires and politicians feel good about themselves… Here endeth the summation of the “modern” human condition.

Why is the human species so dead-set against stability and sustainability?

When will the first glass-domed Museum of the Countryside open in the all-encompassing, dystopian conurbation (singular, covering the entire planet) that humans are building, like mindless, money-grubbing termites?

Children, press here to experience the sound that the wind used to make in real, live, wild trees…

Use this stick to poke the last living squirrel on the planet, and see if you can make him squeal…

Anyway, I am channelling Hector of the Grumpy Gits again, and rambling on and it’s not really my problem, it’s yours, for when that time comes I shall have long-since returned to my own home planet; Planet Rubtwobraincellstogether in the Getagripbeforeit’stoolateyouidiots constellation.

It was – with the exception of emptying the gazunders – a most pleasant cruise-ette indeed, and I even remembered to keep my “old fart sun-shade spectacles” handy ready for once I’d turned and was headed almost directly back into the sunshine.

I do hope that you enjoy the video. Do please do something wild yourselves, such as click “like” and “tweet this” or even – if you have native porters and an armed guard – click on the buttons on the video and follow me on YouTube. In the pre-post-apocalyptic world these things are important you know. I have almost two followers on this blog, and if all of you shared this and that and those and things then The Google might boost one’s ranking, up town, top ranking, see me in me heels and ting, dem check sey we hip and ting, true them no know and ting, we have them going and ting, nah pop no style, a strictly roots… oh good, Hector’s gone. Who the hecky-hell am I now, I wonder?

My task today is to not-cruise and to pack a little overnight bag for myself, just in case they come and drag me away to the Old Farts Home, to sit in a (very) damp Parker Knoll high-back recliner and mutter about “I told you so” as the world becomes even more deeply insane.

They sometimes do that, you know.