The Toddbrook Reservoir dam stands, still – just. The Royal Air Force has re-inforced it at the spillway breach with hundreds of tonnes of bagged sand or gravel or politician’s promises or something. The mainstream media has, as is its ideological and money-worshipping wont, almost forgotten about the place, even though the residents of the town of Whaley Bridge remain “evacuated” to places other than their homes. No collapse is no mainstream news, you see, and Boris has already been there, briefly, and kissed all of the babies available.

There’s no story in a politician kissing a baby for the second time. A catholic priest, yes, obviously, but not a politician. Edwina Currie, a “retired” Member of Parliament (how can they tell? do they poke them with a stick before pronouncing them “retired”?) and now living in the town, hasn’t had quite the media-luvvy attention that I – and doubtless she – had expected. I had been waiting with saucepan in hand, wondering when the  Currie-esque call to “go to Whaley Bridge on an egg” would come. The limitations of the human frame have forced me to put down my saucepan temporarily, and I have resorted to using my spatula to scratch that awkward bit of a chap’s back, the bit right between the shoulder blades.

Mayhap I can’t help but wondering, looking at all of those dropped bags, whether it might not have been cheaper to leave Messrs RAF in peace and to have called in instead an army of dog-walkers – from the evidence of the towpath and hedgerows everywhere the dog walkers could have dropped enough bagged poop in the breach to have made the reservoir waters recoil in horror, and flow back up-hill from whence they came. Tis just a thought.

Perhaps we could then have lobbed a few shopping trolleys atop, just to add to the stability of the repairs.

The less said about the “leadership” the better, but the workers on the floor, as ever, have been doing (the actual) Sisyphean work, and doing it splendidly, even if every photograph released is apparently part of some dastardly Patriarchal plot to distort history. Exits 😉 mode, and also exits Stage Left.

The Canal & River Trust have gleefully announced that they have “secured” European Union &etc “funding” to “improve” another stretch of towpath – by paving it, lycrasaurs for the use of. No, dear CaRT, that is not an improvement, and it secures you (us) nothing except another obligation and invites even greater velocities from velocipedists. The cyclists may have damp patches on their (invariably-)yellow, race-leader outfits at the news, but the news that the new stretch has no facility for boat mooring does nothing for yer atchewal core concern; boaters (in case you’d forgotten). Paved from side to side and with no rings or armco, where is a boater to bang in their pins in order to moor? Oh yes, silly, me, I had forgotten… moored boaters not wanted. We are to return to £commercial£ £marinas£ at all times when not required to look decorative for the tourists.

There is no magical continuing income to be had from paving a perfectly boat-worthy towpath in order to favour cyclists, just a massive flipping-off of boaters and a load of moaning from cyclisters when, after a couple of English winters, the surface begins to break up and they can no longer achieve 50mph on racing tyres and wheels and a polystyrene helmet.

This is what a towpath is supposed to look like, at least according to all those with a plausible claim to sanity. Green and pleasant, not pounded white hardcore and covered in chaps with shaved legs all peering down at “phone” “apps” and trying to shave nanoseconds from their personal best times cycling between Getoutofmywayville and Accidentwaitingtohappen-by-t’moor.

I was (some time ago now) offered fisticuffs by a cyclist because I failed, somehow, to levitate out of his path with sufficient alacrity and effulgence. The hilarious points to note there are first that I do not do fisticuffs (I start on the kneecaps and then amuse myself on the windpipe, being trained in only the finest Black Belt Berserker Dojo), and second that at the time of the incident I was in conversation with an employee of the Canal & River Trust, who was somewhat stunned and nonplussed by events. CaRT’s official line of course is that the sun shines out of cyclists’ ar*ses, and there is no problem with them speeding up and down the towpath without regard to man, beast and Boris-kissed baby.

But don’t get me started. 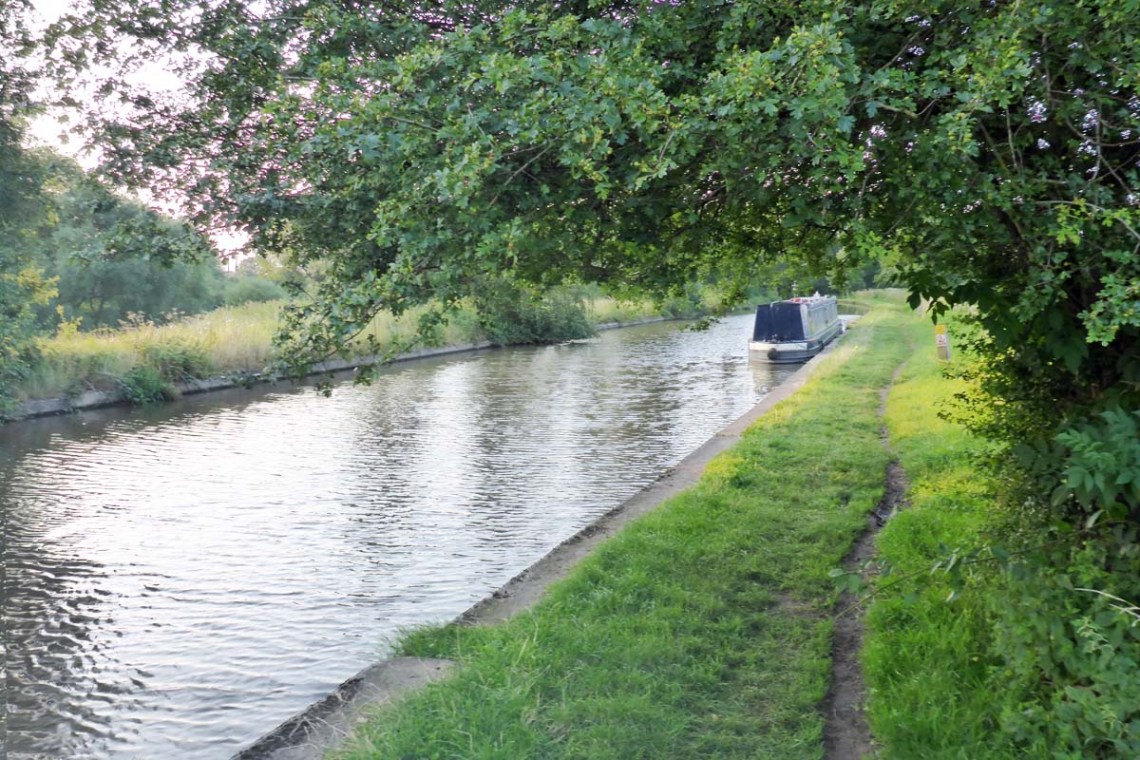 Thus far at least the bag-tugging “ghost” of this stretch has yet to make an appearance (and I am not calling for an appearance, thank you most kindly). The “atmosphere” here is generally most amenable, although we are a little too close to town for my liking. We are making a stealth approach on the locks of Middlewich, and one day, one day soon, when the runes are right and the ship’s augurer looks at the charts and nods, sagely, we’ll zip through them as the Pope’s man passes through the shadows selling Indulgences.

The views here aren’t bad – I look out to port over some poor Cheshire farmer’s property, and to starboard over the standard field-with-trees (and overhead power cables). 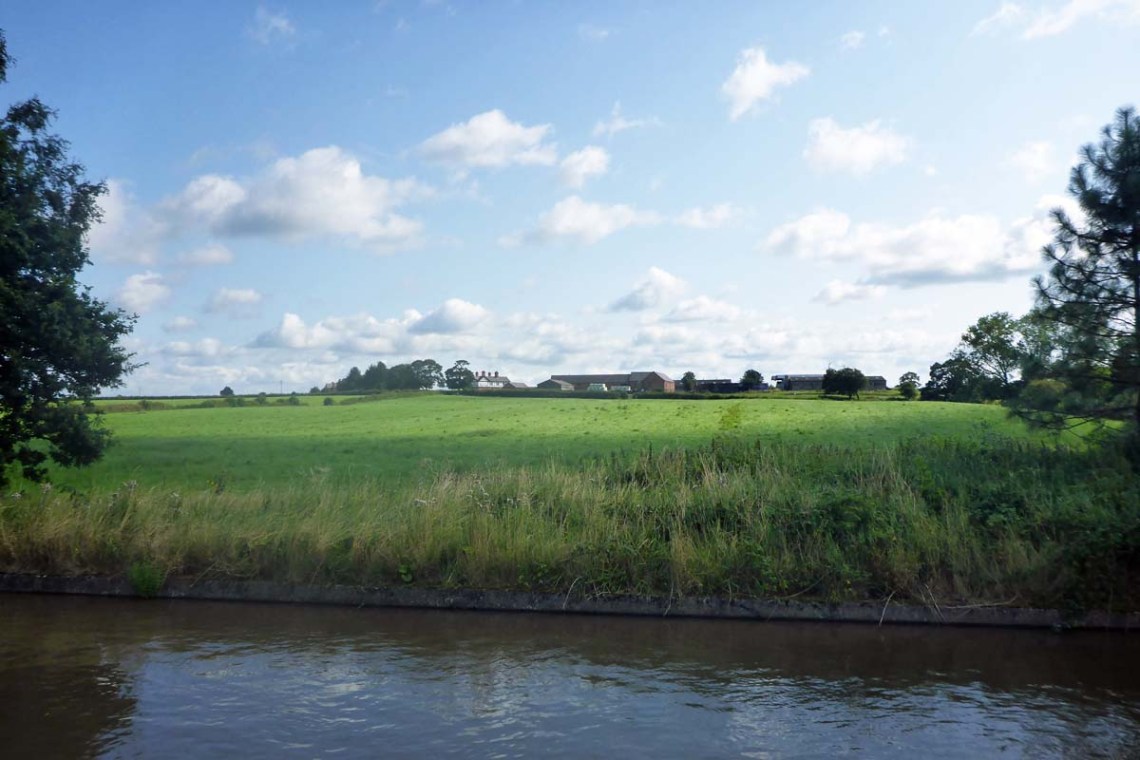 The bridge behind is a bridge from and to nowhere these days, its remaining porpoises being to decapitate boaters who fail to duck as they cruise under, and for the safe passage of the wildest of wildlife, id est hedgehog, fox and vegan were-rabbit. 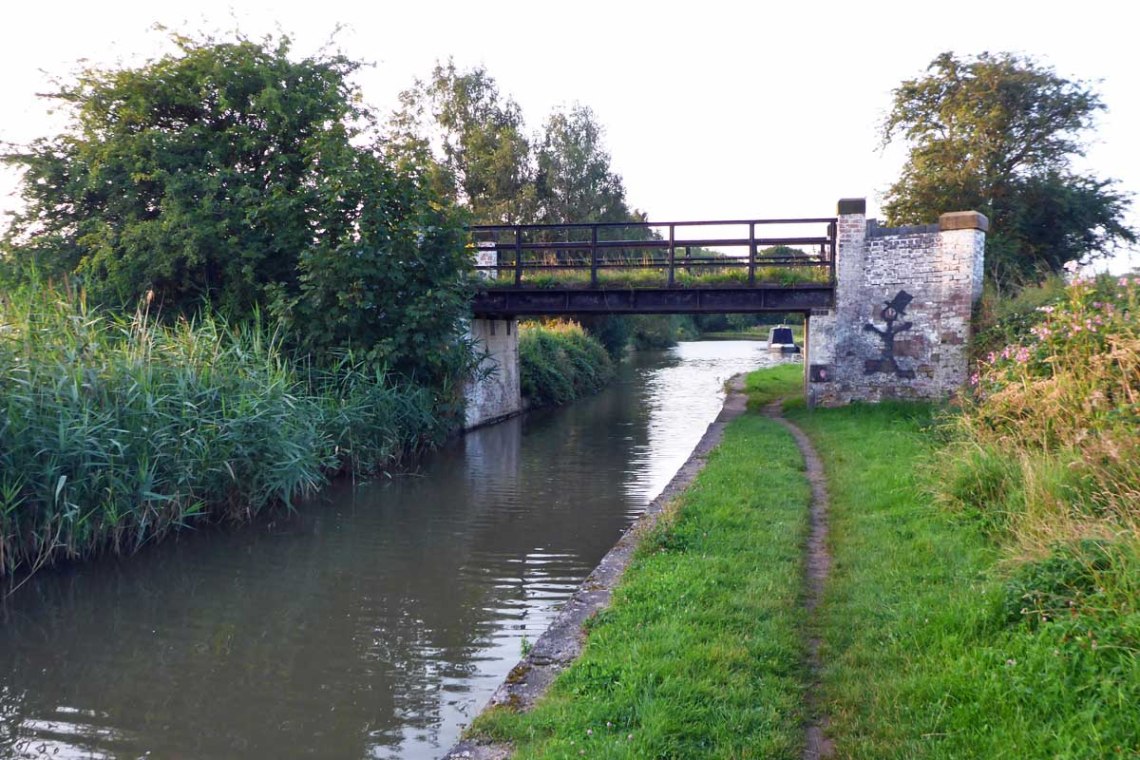 Mind you, the cunning thing about these moorings is that just around the (canal-)bend is a canal-side Household Waste & Recycling Centre – with CaRT sign and with mooring bollards. I half expected the usual palaver at these places, for to moor up and womble in with my bags of this and bags of that only to be turned away because I don’t have blue hair parted on the Prime Meridian, or because there’s a “day” in the weekday, or because waste is only accepted from the boot of a mid-beige Trabant two-door driven by someone called Alphonse and known to the Centre’s management by marriage on his mother’s side. 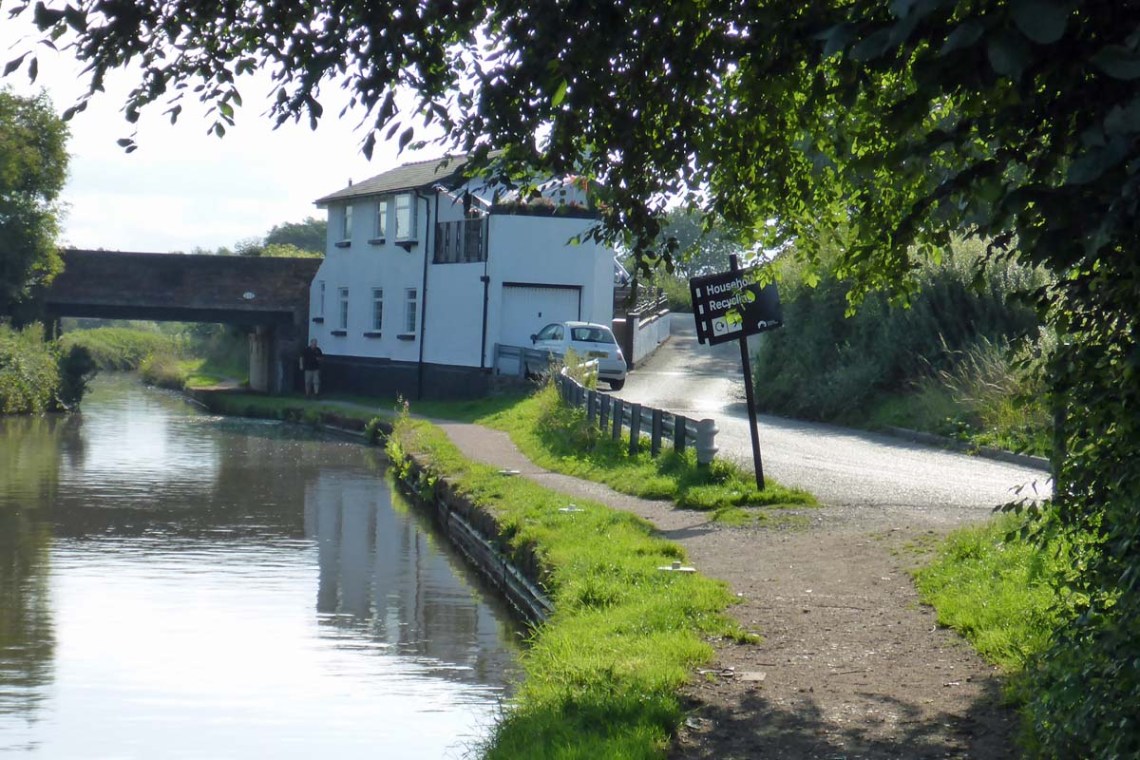 None such. Not a bit of it.

I tottered in laden with my Dustbin Liners by Gucci, was greeted with a smile and a gate was unlocked and opened for me the better to allow my (by then-) pedestrian access (I couldn’t get the boat around the marked lane…) to the necessary skips. Quelle civilisation!

So there you have it, really. A very slight mooch, a visit to the waste-disposal, no ghost, a dam that hasn’t fully breached (thanks be to the Greek & Roman gods, all of them) – and another stretch of nice, green, boater-friendly towpath bites the dust. Bites the dust quite literally, once the bicycle-friendly surface dries out.

There’s a bit of a breeze here today. Tis above the Hutson-Move Indexometer, since it’s blowing off any towpath that I may wish to visit, had I in fact moved, and flying the Cardinal like a kite across the canal on the centreline is not my idea of fun fun fun ’til Pater took the T-Bird away.

We’re on pins here, far from my mostest favouritest form of mooring mechanism, but needs must when there’s no other facility. There’s also a smidgen of a “Shroppie Shelf” here even though this is the Trent & Mersey canal, so we’re on the wide blue squidgy fenders to stop the Cardinal’s baseplate from banging on the underwater obst-er-uction. We have vittles, we have water (and there’s more of that up ahead), we are sans rubbish thanks be to the nice chaps at the tip, and there’s a week or two left in the gazunders – so there’s no rush, no rush at all to return to civilisation.

Let the good times – and the CaRT spotters – roll.

The clouds are rolling in again, so I don’t see why everyone else shouldn’t roll too.

Chin-chin for the no-news, gossip-free moment. Long may it last.

Now, if you’ll please to excuse me, I must away onto the towpath to check those bloody mooring pins again, to see what effect, if any, there has been from the speeding past of that risibly-fake “tug” style thing with the faux-rivets, and that full-throttle boat-of-semi-paralytic-drunks, “Audrey”, from Driftaway Holidays dot co uk.