Boating eh? No matter where you moor, no matter it’s at the full extent of my pocket rocket’s full zoom, there’s always a cow watching you. #bovinegazeophobia 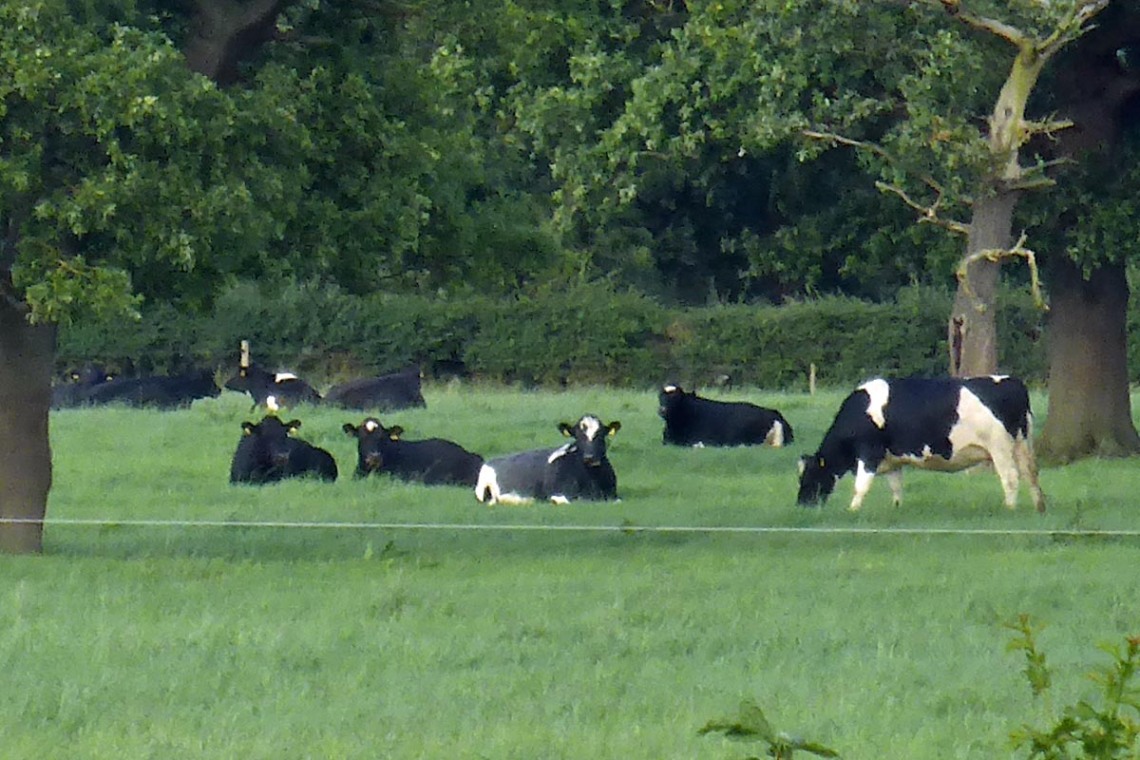 ‘No, Marigold, he doesn’t look right to me. Cynthia, what do you think?’

‘No, we meant about that chap over there. What do you think?’

[Seventy-four human individuals targetted and eliminated by Bovine Operatives working in the field between 2000 and 2015. The Government Statistics admit as much.]

This is why I won’t walk through any field with cows in it.

I blame the entire problem of violence in cows on the decline of the hyphen and the inexorable rise and rise of that new and mysterious occupation so favoured by our strange (increasingly strange) trans-Atlantic colonial (distant) cousins; the coworker.

How exactly does one “ork” a cow, and why do USAean cows need orking?

Unless, of course, they mean a co-worker… 🙂

Anyway, enough of England’s wildlife and more of England’s weather. It has improved of late, but only in the sense that it has returned to its more usual utter changeability, each hour upon hour being a separate season in and of itself, and all presented in random sequence.

I have been trying to take advantage of some of the lulls in the more rainy seasons to patch up some of the Cardinal’s battle scars.

The blacking on the hull is fresh and tickettysplendid after our adventure in Aqueduct Marina earlier this year. The upper paintwork is dull and tired (aren’t we all?) but still doing its primary job of protecting the metal, it can wait for another £year£ before it receives attention. At the moment I am concentrating on the gunwales, on the Cardinal’s (largely, but by no means exclusively, defensive) battle scars.

Half-way through the process and damp with overnight dew they look truly awful. Here they have been taken back to metal with the rinky-dinky electrickery-drill-and-wire-wheel, cleaned with White Spirit, rinsed with fresh water, dried and then given two coats of Hydrate 80. Once the whole shebang has been treated thus (as in, the half of the boat accessible from the towpath) I’ll bung on the blue top-coat and see what gives.

I am not looking for squeaky showroom paintwork for the Cardinal, far from it. Not for the Cardinal and I the paranoia of uber-perfection. Nor do I want him to look like a Glaswegian drug-dealer’s dog waiting for attention from the police vet after a territorial dispute involving fifty Constables and a serge uniform trouser-leg. Nope, we’re aiming for the middle ground of “looks cared-for neat, but not Brasso-neat”. I want a look that tells the canal bully-boats (and there are many such to whom the notion of “politely giving way once in a while” is alien) ‘don’t even think about messing with me, I am no stranger to ramming-speed if necessary’, but also a look wherein I might still entertain the Vicar to tea.

Then, once I’ve done this side we’ll mooch on, find somewhere to moor where the other gunwale is accessible, and repeat the whole damned process. 🙂

I would like to get as far as refreshing the white stripes on the bow and stern too before I have to get my winter draws on. Oh – and the gas locker lid, too. What are my chances?

Ah – yes – and I want to replace the grippy-strip stuff on the top of the gunwales.

Egads! This list of jobs appears to have been written on a page from a Mobius-notepad.

A slightly quicker job has been scrubbing the canvas covers. 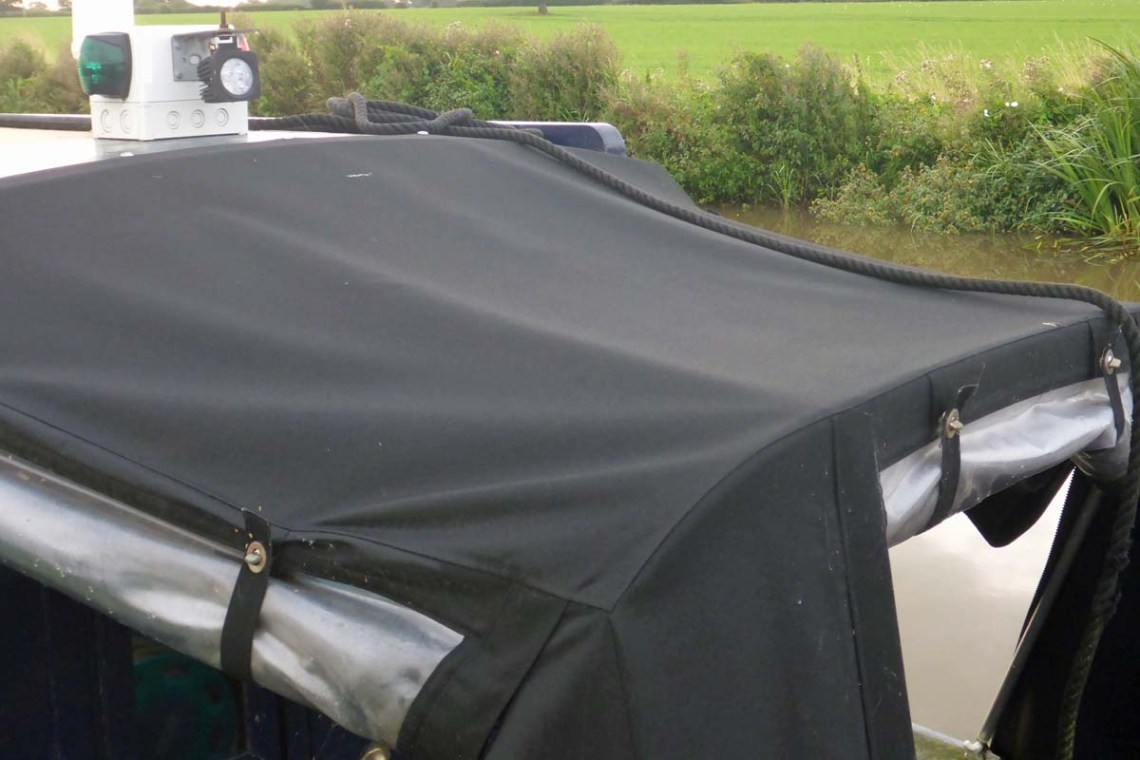 In this matter the rain, which isn’t falling on the plains of Spain, but in England, has been a positive boon – helping with the rinsing and repeating.

The covers have been on the Cardinal for more than three years now, doing Trojan service in protecting the well deck and stern – and me – from the wind, rain, sunshine and Datsun cogs, whatever has been falling from the sky. Over that time, being das canvas, they have developed a slight green tinge of alien growth in places. Not any more. Well, just a little – I need to attack them another couple of times for total eradication.

Old-fashioned laundry powder is the thing, the sort that kills baby ducks and puppies at fifty paces the moment you press with a thumb to open the box. Yes, I am being careful with it and using the absolute minimum needed. Given the utter shi… the rubbish, from farming chemicals to industrial waste, that is dumped into the rivers and canals I don’t think my cover-washing will see me labelled as England’s “Most Wanted”.

The next step with the canvas covers will be …problematic. The re-proofing spray that I have stipulates twenty-four hours of dryth (another new word for a rare meteorological phenomenon in England), and being a spray also requires sans breeze for application.

Sunshine on a rainy day. Never a truer song lyric.

The gaze of the cows making the hairs on the back of my knees rise is not the only distraction available in this neighbourhood, oh no. Yesterday a chap got not one but two glassfibre cruisers thoroughly jammed in the lock, having left his fenders down. He managed to free his boat just (and only just) moments before the point at which sightseers and well-wishers would have been forced by human decency to end his suffering by calling out the knacker’s man with his humane-killer.

Understandably, the poor chap was somewhat flustered and discombobulated. Being stuck at the bottom of an 11′ 3″ deep lock will do that to you, every time. It didn’t help that his cruiser had some sort of “toy egg whisk” arrangement in place of a decent (and decently-sized) engine. No grunt available, just no grunt at all.

Still, once I’d found somewhere to settle where I might watch but remain unobserved myself, it was a pleasant couple of hours of schadenfreude.

There but for the grace of the Greek and Roman gods go we all.

Right, I must away outside, since it’s not actually raining at the moment, and see if I may progress matters any.

Wish me luck, and a spot of Mr Blue Sky.

Boating. No-one warned me that it would involve cows and electric drills and scrubbing down the canvas sails with something really intended to sterilise a sailor’s smalls. Is it any wonder that I remain in a state of confusion myself?