They (contractors on behalf of the Canal & River Trust on behalf of Her Majesty in consideration of we; The Peasants) mowed the towpath hereabouts today. The ones that I’ve seen have always been most considerate. They mow and strim but they leave patches of wild flowery things untouched, and they don’t strim alongside moored boats or mooring lines. I wonder how they manage it sometimes; the towpath not far up ahead is damned near impossible on foot, let alone on or with a heavy motor-mower and/or a petrol-powered strimmer attached to your neck. Sometimes they mow great long uni-directional stretches and their van collects them and the machinery at some distant point, sometimes – as today – they volte face after a few miles and return like salmon to their point of origin.

The photo is, of course, one taken at extreme range; nobody except politicians and actor luvvies likes being paparazzo’d while working.

Every six or eight weeks during what passes for “summer” is the usual, dependant upon location and the actual presence of “summer”.

They didn’t get much of a chance today, and neither did the day-boat out on hire from one of the local companies. It rained. It monsooned.

The poor beggars on the day-boat came pootling past a-pace, sought out the towpath and banged in a couple of very half-hearted pins. One line got tied off back on the boat, the other, as you can see above, was draped like unwanted knitting.

I mention, of course, that it took me a long time to spontaneously learn the two and a half knots that I now use for everything. Few people tell you these things, either assuming them to be common knowledge or preferring to watch the “learning” process.

For the tying of a rope temporarily to lock bollards or service area bollards or wotnot & such I use a sort of doubled-up rope variant of the round turn and two half hitches.

Who would have thought that all of those childhood years of my dear sister telling me to “get knotted” would have paid dividends?

Fifteen minutes later the monsoon stopped and Mr Sunshine poked his hairy you-know-what through a gap in the clouds.

Everone moved on. I do hope that they’re still having a great day – in Ing-ger-lund the weather, whatever it may be, is all part and parcel of any day out. They looked to have the makings of a good picnic lunch aboard, anyway, when they passed me.

The (now blue) gas locker lid survived the rain and looks much better than it did. 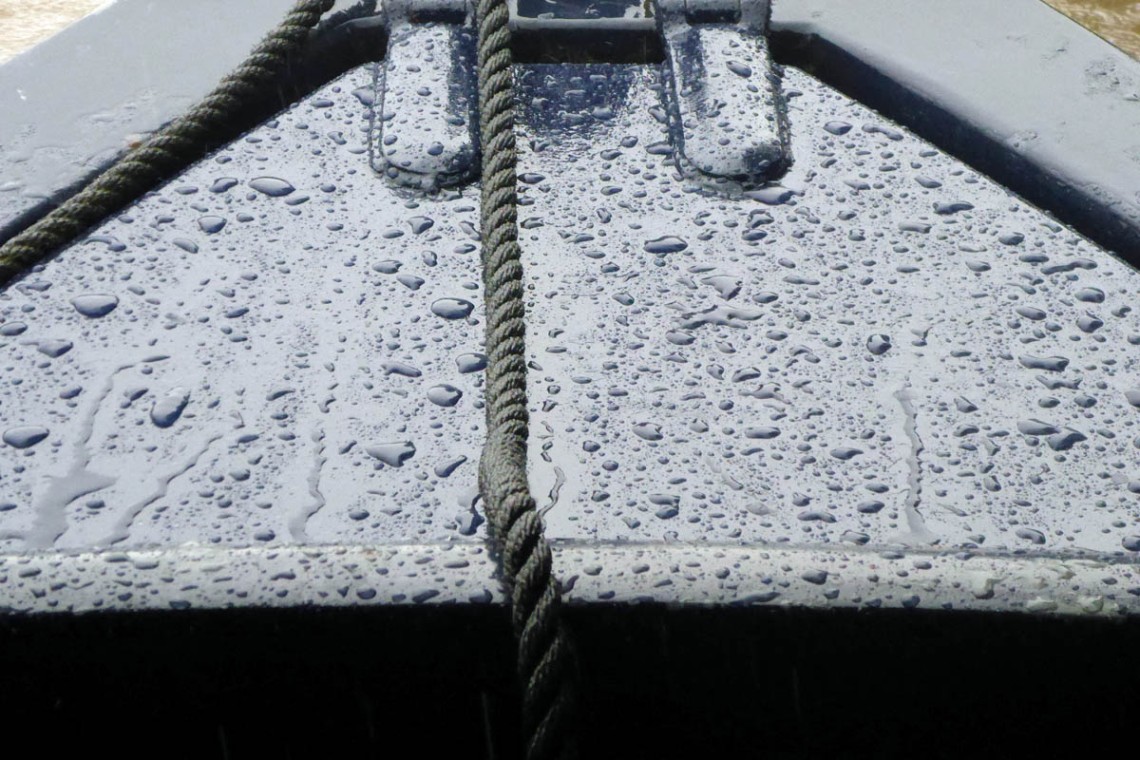 If I could just, please, have a(nother) week or ten days of reliably good weather (not persisting down, not ridiculously hot) to get the port side gunwale treated and painted… This would be most splendid. Still, we had a fantastic week or ten days this past February, so who knows what autumn and winter will bring?

I discovered – after not some little investigation and supposition and experiment – this morning what the damned clanking noise was at the Cardinal’s stern (while moored here). The wind, obviously, but clanking what? It sounded very heavy and mechanical inside the boat, but then everything sounds different in a steel tube. Turns out that it was the two small hooks used (by the previous owner, not by me) to hold open the stern doors – the wind was just right to catch them. Clank clank clank. Tiny ruddy things really, but what a noise in the dead of night, a much “heavier” sound than one might expect, steel on steel. The things to tie back the things are now tied back themselves and all is peaceful again.

Spent a goodly portion of the afternoon researching the compatabatability of a collection of clever little devices that will allow the charger that is used by the solar panels to sense the temperature of the domestic batteries. Apparently the charging regime needs must be varied according to whether they are hot, warm, cold or indifferent, and my current “black box devices”, up to date though they were, for some reason weren’t equipped to do this. Silly Dutch persons. This gizmo should, I say should, help stop the system from slightly over-charging them in summer and which is what is more important, under-charging the batteries in the cold cold cold of winter when lovely wild polar bears (and terrifyingly silly and pointless feral Greta Thunbergs) roam about in the engine room.

We shall see. I have my fingers crossed.

Other than a couple of paddle-boarders passing today – in that water? you must be joking! – there’s no gossip or scandal that I am aware of.

Rice and veggies and things and a spot of nice curry sauce for afternoon tiffin methinks. Then feet up in front of a(nother) good book. Current read is The Time Traveller’s Guide to Elizabethan England, all about how to say hello in fluent Elizabethan and how to avoid being hanged, drawn and quartered and suchlike for walking into an inn and demanding Linda McCartney “chicken” & leek pie and chips with a pint of Martini Rosso, ice and a slice, please inn-keep – oh and what’s the free wifi code hereabouts?

Damn but I know how to live.