As in I moved, met no boat traffic until it was to help me through the locks, got through the aforesaid locks before they were closed, and found a mooring space exactly where I had been intending to moor… Veni, vedi, cor-blimey.

Monday morning, the Cardinal and I decided on a bit of a mooch. As soon as it was light enough, off we cruised. The homunculus in my head kept rocking back and forth, back and forth, back and forth, tunelessly singing ‘Hack Green – Hack Green – HACK GREEN’ to me. Being open to suggestion, I set that as my target. For one thing, that’s where the ‘Secret Nukular Bunker’ is, and we are getting rather close to Le Brexeet, one way or another. No harm in being quite near a building made of twenty-foot thick reinforced concrete during the transition…

To be brutally realistic, the location of some (semi-)(ex-)government institution* is not that much of a secret, just follow the chuffing great mast until you come to the 6″ thick steel doors… and the “Radiation” emblem stickers on the wire chain-link fence.

*There are several lower floors that Her Maj’s unwashed Public is not allowed into, so I remain unconvinced that the facility is entirely without current official purpose.

… Oh I say – hair lair? Yes, thank you – is that a nukular bunker at the bottom of your garden? What a splendidly avant-garde très bon idée pour votre jardin. So much nicer than a set of gnomes fishing, or a swing-seat or something.

The most part of the morning’s cruise was delicious – not another moving boat in sight. No rain, very little breeze, and just enough coolth to make me wish that I’d put another layer on while dressing that morning – and perhaps taken a scarf out of storage.

Six and a half very pleasant miles, the long, long line of moored boats through Nantwich to creep past, and two locks; three hours of gentle pootling. There were one or two of Professor Frank Enstein’s more spectacular failures about on the towpath, and a few dogs more human than their humans, but nothing too apocalyptic or worrying.

Such boat traffic as I did meet I met as they were coming down Hack Green locks… so not only were the locks being set in my favour as they descended, but they were very nice people and they gave me a choice between a punch on the schnoz or staying aboard my boat while they locked me through. Ooh, let me think about that, I said…

A boat in the second of the locks left the lower gates open for me as they exited and Robert was my Father’s brother, as they say. No idea who “they” are, but I am assured that this is what they say, when they say anything at all.

Once through the locks there were just two narrowboats and a CaRT work-bargey-thing on the “visitor” moorings and loadsa space for a Cardinal. Not being so green as I am cabbage-looking I know how well CaRT workboats are generally moored (with blue string, very loosely, if at all) and so gave this one a complete mooring ring of space to bounce around in, mooring up one ring down.

Treace and Panquility at last.

No sooner had I moored up and begun to breathe in the sheep & cow fumes than there was a rush of boats, and three moored up behind, filling the moorings very nicely indeed, Mr Sardine.

If all of the world’s politicians were laid end to end I wouldn’t be the least bit surprised, but even at the end of October it seems that England’s narrowboats must also be bow to stern, and there was me thinking that it might have gone a bit quiet at last.

Then I noticed a flurry of CaRT hi-vis and workmen arriving, toting wheelbarrows filled with not-insignificant canal mysteries, and carrying strange ladders and with some of the world’s largest spanner-like mechanical devices shouldered.

The locks were being closed, and the pound between them drained.

But only for the afternoon, while a dodgy paddle was mended.

Then – oh happy day – (other hippie songs are available, mention here does not imply endorsement of “Jesus”) – a nice CaRT spotter walked past, iPod sloped, spotting me. Was there to be no rest at all for the wicked?

I have been so very, very wicked, so perhaps not.

13:28 hours, I heard him say into the cunningly-concealed cuff-microphone of his electric radio, while simultaneously pressing an invisible ear-piece more firmly into his best listening-ear. Yes, Hutson’s here… advise all departments, stand down the Army, and let the PM know we’ve found him again… I estimate no more than an hour or two since he moored here. 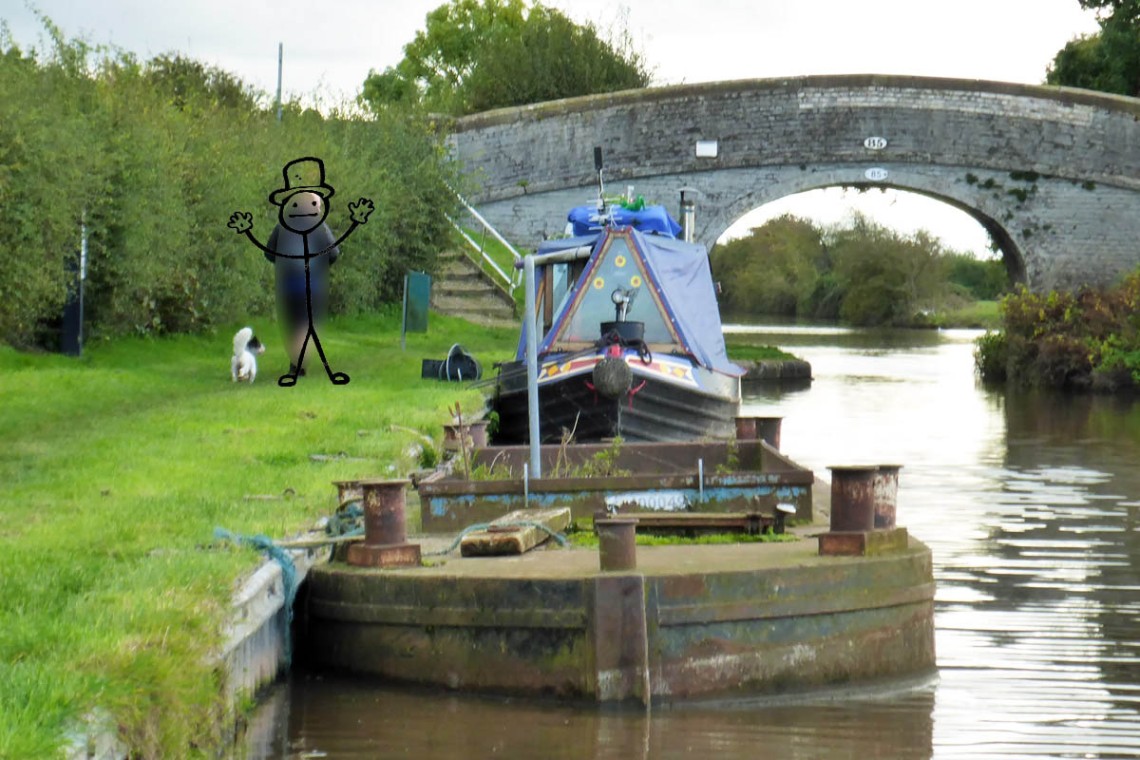 The Cardinal’s batteries have been fed – and fed with a variety of electrickery other than the solar-chargers, which is good, much in the same way as we humans and our “five a day” malarkey – and I have been fed (broccoli… and spuds and carrots and cabbage and onions…) and Mr Stove is lit, so all is well with the world. For the moment.

Yesterday evening I mostly put my feet up in front of the indoor controlled-conflagration device, and watched a DVD.

This boating lark’s not too bad, really, is it?

Chin-chin for the moment, Muskies.