The weather forecast from Her Majesty’s Meteorological Office is laden with rain and breezes tomorrow, and yet I do rather like these here moorings, they are as rural as a warm cow-pat and as comfortable as any stretch of damp armco with a MiFi signal can be.

The Cardinal and I have therefore enpootled from one end of these moorings (restricted by they who &etc to “48 hours” max[imum]) to about two yards past a significant bit of wood at the other end.

Bureaucracy may well record us as being in the same area but one side of that wee post in the hedgerow is only two days of stay allowed while where we are now is up to the more proper 1995 Waterways Act fourteen days should the mood take me. It won’t take me, but I do think that the weekend here might be good for my #wellbeing #lifesbetterbywater and so forth.

The move took ten minutes (from rope untying to re-tying) during which time – allowing as best I can for the rotation of the planet, the planet orbiting the Sun and the rotation of our galaxy about its core – but ignoring the rest and not compensating for the expansion of space-time – the Cardinal and I actually moved in space through approximately 82,500 miles.

The true velocity of my narrowboat was therefore on the order of between 494,998mph to 495,002mph (since I have no idea whether our apparent 2mph motion was retrograde or not, and if so then to what degree). This is something like 123,570 times the canal speed limit. Not bad for a 42HP 1.7 litre Isuzu diesel and a 17″ three-blade prop.

I think that this may be why the cows in the field on the offside all gawped at me in not some little awe and wonder on our arrival. The Cardinal must have appeared in a flash, probably trailing a rainbow-streak of ionised particles to the stern.

Captain Kirk eat your heart out.

Unless, of course, those cows were themselves also travelling at near half a million muppets per squilliquode, and our relative velocipedes were just a couple of miles per hour different from one another (they relatively* stationary in a field, drooling, versus me, relatively* stationary on the rear deck, also drooling), in which case they were probably just being curious, as most Earth cows are. Preternaturally curious.

*Term ‘relatively’ used to hint at an entirely more complicated can of worms.

Or perhaps they are CaRT narks, logging my progress?

Anyway, short of searching the herd for a cow with an earpiece, a direct line to the canal rozzers, and more money in the bank than it can explain away I have no way of knowing.

‘Suspect Everyone, Trust No-One’ is (one of) our family motto(es).

‘Kill them all and let their various “gods” sort them out’ is another one, and one of my personal favourites. I remember it hanging over my cot in the nursery, hand-embroidered in a Gothic font and then elegantly framed. It covered up a nasty stain on the wall marking the location of the demise of one of my earlier nannies, fatally discomnobulated during a nappy-change gone horridly wrong. I was a disgusting child. How I used to laugh, imagining her arriving at the Pearly Gates wearing the same facial expression she bore as she left this mortal coil!

Motteaux aside, the view from my side-hatch has changed from this

and I do now need a sit-down. If only I could find a seat that wasn’t rotating with an axial tilt of 23.439281° while also in a slightly eccentric orbit around the Sun, wobbling a little because of the influence of the Moon, in a Solar System that is itself in orbit in a Galaxy that is accelerating away from a “Big Bang” through space-time that is constantly changing.

A move of 82,500 miles (plus some factor to adjust for the motion of the galaxies away from the alleged site of the alleged Big Bang which I don’t have the necessary piece of string to account for) gives me the option under CaRT of mayhap moving on Monday, when Friday’s inclemencies and the weekend weekenderings will be over and done with, should I feel like doing so. Perhaps earlier. Perhaps later. Nano-second precision and timing is everything on the canals.

It must be said that the sky does suggest that a little something is in the offing, once Weather HQ has made up its mind quite what. 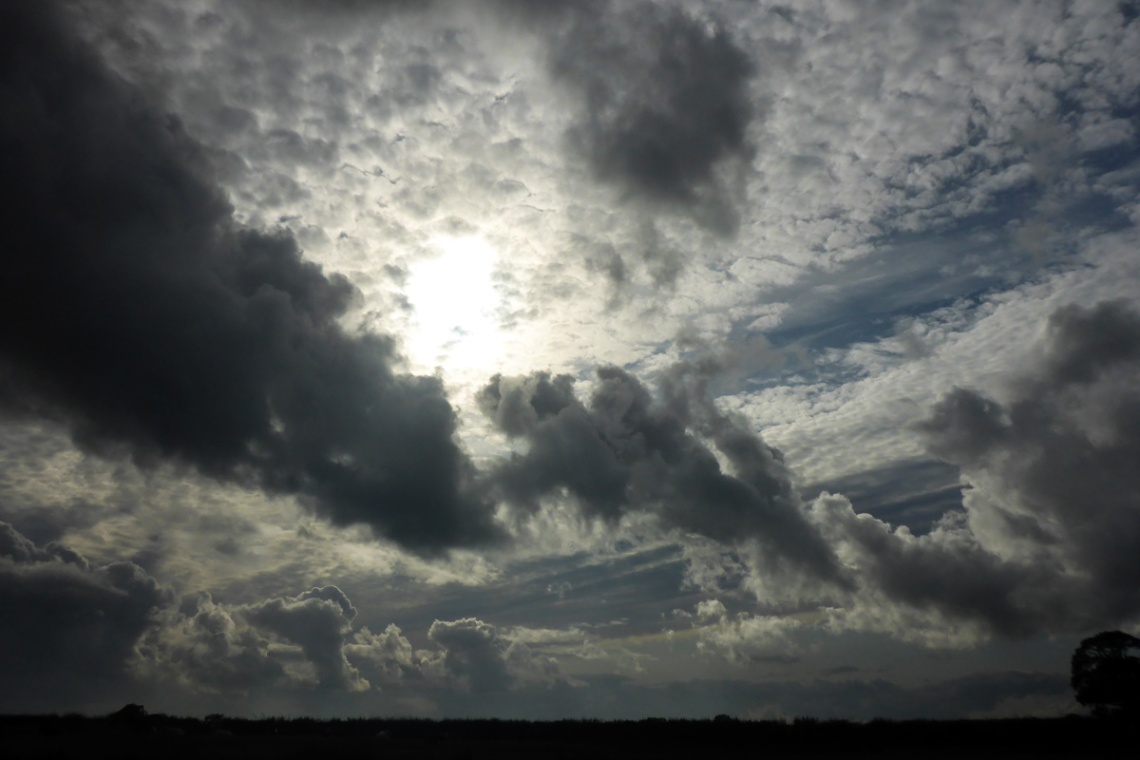 Moreover, notwithstanding and so forth by Jove and Jiminy Cricket, the cows are all now lying down…

…and we all know what that means, don’t we.

Your starter for ten; what is wrong with the bucolic scene in the photograph below?

Nota bene, the photograph has not been manipulated. The presence of sunshine-sparkles on the water in England during late October is not the answer. Nor is it that one of the narrowboats appears to be one of the new-fangled “hover-boats”.

Answers in the comments please.

Chin-chin, bottoms up and tootle-pip etcetera.