There goes my hitherto inalienable right to tut-tut when other folk cruise past slamming ice around.

There was no ice where I was moored. There was no ice for most of my cruise-ette. Granted, the mooring ropes were a bit like steel hausers when I set off, and Mr Starter-Battery had to put his back seriously into it to turn over Mr Engine, but – well, really. The ice only began a couple of hundred yards into the moorings of the Middlewich Branch, when the Cardinal and I were committed to continuing, reversing between two lines of moored boats and then reversing back out of a junction not being common canal behaviour, all things considered. All that I could do was to keep my speed below even “tick-over” and vow not to pass that way again until I’ve dropped from human memory. 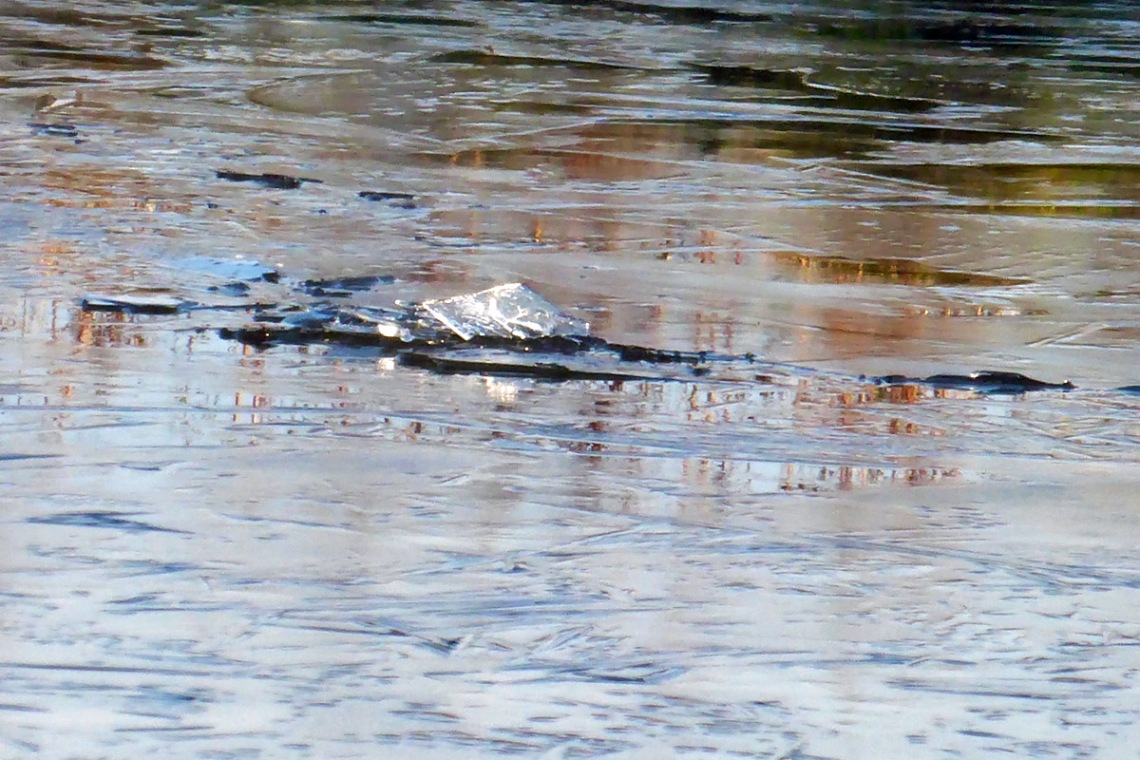 The Universe loves a laugh. Usually at my expense, generally six dozen times a day (more on weekdays, high days and holidays).

On the earlier part of the cruise-ette the Cardinal began to show the signs of summat around t’prop – engine working slightly harder than expected, speed less than might usually be for the revs, prop-wash a tad scraggier than it ought. The usual tactics of a good blast of reverse followed by a glide forwards in neutral and then back into full steam ahead didn’t work.

Whatever was clinging to the prop was either a very clever, preternaturally-clingy leaf-ball or something more serious. I limped us to the visitor mooring rings at Barbridge (not knowing that there was ice just around the corner, waiting for us). Moored up, off with the engine – keys out of the ignition, since I was to be fondling the propeller – up with the hatch and then a touch of judicious beltery-smackery with a rubber mallet to get the weed hatch off. The very heavy, very cold, very muddy weed hatch, all while lying down on the very cold steel deck and reaching down, hoping that my specs wouldn’t fall off.

A single leaf floated up to the top of the water in the little “moon pool” over the propeller.

A leaf that had freed itself and come to blow a raspberry at me.

That couldn’t be it. Surely?

Canal water (a heady mix of autumn/winter leaves, industrial farm run-off, cattle pee, rat pee, dog pee, human pee and hungry carnivorous carp in search of tender young human flesh) is very cold. When you have an arm plunged in it up to the shoulder it fair takes your breath away.

There was (praise be) nowt around the prop. It had been a very clever, preternaturally-clingy leaf-ball, and the single leaf had just been the volunteer messenger left behind to deliver the “ha ha” punchline. The leaf-ball had fallen off, me suspecteth, only when I’d actually pulled in and moored up, it cocking a snook at “the usual tactic”.

You’ve got to laugh.

Oh, how I guffawed.

If you should ever pass a narrowboat and all that you can see is an up-turned pair of (admittedly very shapely) hairy legs poking out of the stern, accompanied by a ‘glug-glug’ soundtrack, please do investigate. I’ve probably over-balanced and got my head stuck down the weed hatch again.

So, we’ve had a spot of the ice. The weather forecast says warmer now – up to about 8°C – but the quid pro quo vadis, Spartacus, is wind, wind up to 40mph. Dullth, severe and comprehensive dullth of the sky and sodski all in the way of daylight. Moan, moan, moan, it’s all that I ever do.

We did get a bit of a blast of a sunset though, before the weather gods wrestled Mr Sun to the ground and began to put the boot in. 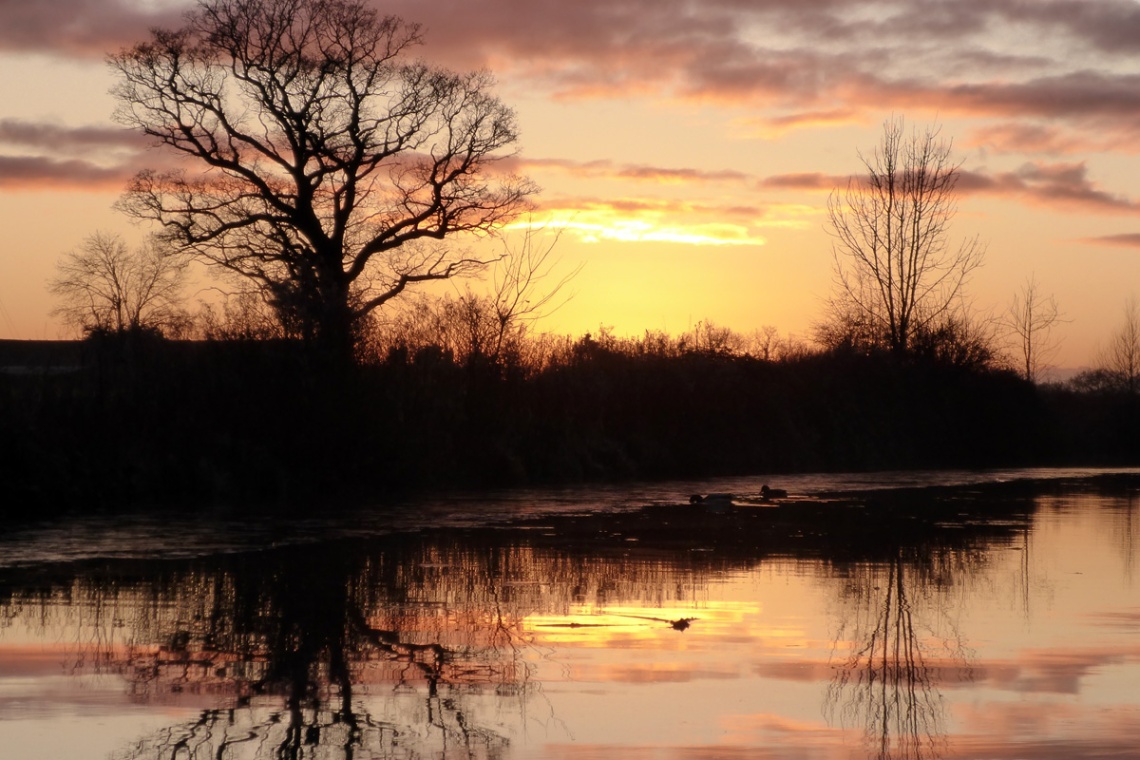 We lie at anchor now awaiting that magical combination of canbebotheredness with a drop in the breeze (some time afore the weekend) in which the madness will come upon me again and I’ll mooch on through my favouritest chandlery (Venetian) and top up the Cardinal’s diesel tank with the finest Napoleon sipping-diesel. I shall have to venture out soon with my bamboo dipping-stick and tape measure, to estimate our needs.

Sometime today or sometime soon Messrs Halsall, yonder fuel boat, are expected to cruise by, so we’ll endeavour to snag a sack or six of coal from them as they briefly slow down for the lock ahead. It’s a process akin to the way that British Rail (when they did railways) and the Post Office (when they did mail deliveries) used to swap bulk area collections and deliveries – I hang out with my arms outstretched and the crew of Halsall throw sacks of coal at me while maintaining their forward momentum.

Actually, I think that they’d throw stuff at me even if I weren’t paying…

After that I confidently expect Messrs Sainsbury’s to call later in the week with my final delivery of the year – 10cwt of Brussels sprouts and a small but perfectly-formed mince pie. [Christmas lunch is planned to be Heinz Beanz on toast with Brussels sprouts, followed by a warm mince pie and a 20cl of festive whisky.]

Then once the groceries have called I plan on hiding away somewhere and moaning and shaking my fist at folk who boat about when the canals are iced over. Oh no, hang on – I can’t do that anymore, having been tricked into being guilty of same myself.

Perhaps I can open the side-hatch and call out to them ‘That’s not how you break ice! Idiot!’ and ‘I’ve seen better ice-breaking in meetings of the Autism Social Club!’ and suchlike?

There must be some way that I can maintain my status as a nasty, crabby old git.

What’s that you say? My reputation is unassailable, not at issue, unlikely to change before the end of time?