He was ever so disappointed.

I received a most kindly notification that a steam train was expected to pass by these moorings at a certain time. Being fond of proper engineering and decent technology I pulled on my boots, grabbed the pocket rocket camera and wandered out to the best viewpoint.

There was a gentleman standing there as I hove to. He had binoculars. He had an SLR with an obscene lens and a flash unit made out of a WWII searchlight. He had that certain you do sais quoi about him.

‘Are you here for the same reason that I am here?’ he asked.

Being me, my mind ran through the possibilities. Flashing Little Willy* at unsuspecting passers by? Standing here because my real name is Billy Gnomaytes and it’s as good a place to stand as any while the world goes on with its business for a while? Sent by the Greek and Roman gods to use my body to deflect a certain draught that will eventually flutter the wings of a rare Amazonian Space-Time butterfly and thus precipitate an important tornado in a certain straße in Berlin during the late nineteen-twenties, early nineteen-thirties, thereby changing the course of European history? Been notified by the European Space Agency that these are the exact landing co-ordinates of a meteor strike and come here hoping for an early and spectacular release from this mortal coil? I was there for many reasons, none of them likely or easily defensible in a public forum (of two).

*[That’s my camera, silly! Everything has to have some sort of name.]

Seeing my puzzled and hesitant brow he elucidated (filthy beast).

[Still, unavoidably] being me, I channelled Little Eva and launched into my moves as one of the original backing singers on Loco-Motion. I am the one in the slightly soiled cardigan.

Usually this sort of thing makes folk back away but it had no effect on Mr Stranger.

Perhaps the chap gets out, as they say, even less than do I, and he then launched into an excited conversation, apparently delighted at having collided with a fellow sufferer. I mean, a fellow enthusiast.

Looking over both of my shoulders my hopes that a colleague of his had walked out from behind a tree or out of the hedgerow or something were dashed, and I came to the conclusion that he was talking to me.

I smiled, but it was the sort of smile that you give a French Customs Official at Marseille who suspects that the cricket bat in your luggage is made out of Brazilian Rosewood and inlaid with ivory poached from virgin koalas or pandas or wherever ivory comes from these days.

I tried, really I tried – it’s only polite, when all is said and done – but I just can’t speak Trainspotterese.

Rather as with gastrognomes (sic) where I spend my time trying to explain that I have three taste buds (hot, cold, and curry), I tried to explain that I don’t know my 77464 treadle-wheel express from my Deltic pressure-dump tank. I can look and I can confidently point to something and pronounce verdict as ‘steam engine’ or ‘not steam engine’.

I just like ’em. I like ’em all. I know sodski all about them though, other than the engineering and physics of how they move.

The poor chap tried so many conversational gambits about various engine classes and carriage types and serial numbers and such that we almost missed the arrival of what I squealingly explained to be the ‘ooooh look – big chuff-chuff!’

I am so, so sorry, Mr Trainspotter, and I do hope that I didn’t dampen the experience for you. Seriously, I do. But I’m just not equipped to converse at that level of detail.

After we’d taken our respective photographs of the train he hopped through the gate into the lane and away, occasionally looking over his shoulder with the sort of look that a faithful but whipped hound can give when in the mood for emotional wounding.

I went to the chandlery, Aunty Wainwright’s, and bought bread.

In matters of being “a disappointment” I have never, throughout my entire life, been found wanting.

Here is a photograph of a recent dawn, just to remind you that the sun also rises.

I have no idea what the model number of the sun is. I just like the sun. It wards off Seasonal Affective Disorder.

Would that it could also ward off Seasonal Affective Disappointment. 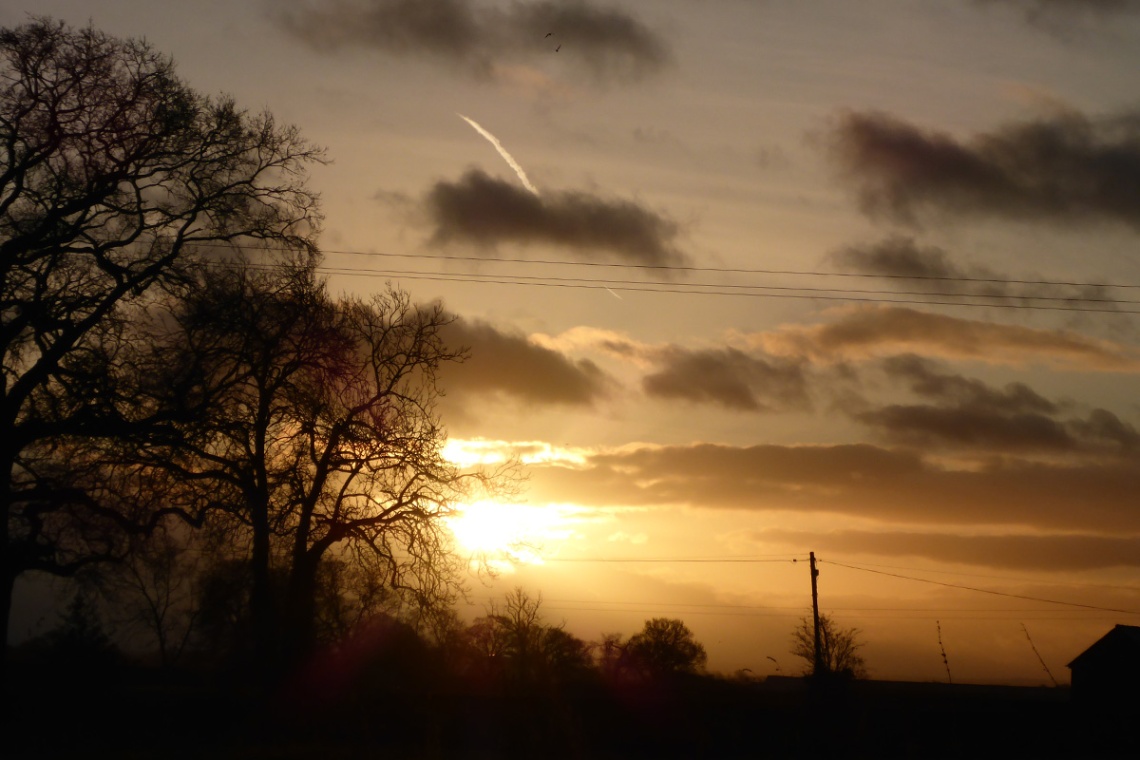