Many moons ago I wrote a wee collection of short stories about Archetypally English “Super-Heroes”. Being confined to quarters a very nice gentleman known to the world as Tony Gilbert has been brave enough to read one of the wee beasts aloud… 🙂

Tony’s Amazon Page is here, for he doth write the most splendid books for children. Please do visit it, follow him, and buy his books.

Tony has two read-aloud youtube channels for your entertainment, one for

Adults (as in “for grown-ups”, not “adult” as in “adult entertainment”!)

Please do visit both and subscribe and watch whatever takes your fancy.

I would really appreciate it if you would watch it – to get Mr Gilbert’s viewing figures boosted – and click “like” (at least on his other videos, if you don’t like this one!) and subscribe to his channels. There’s an awful lot of work goes into these videos. 🙂

Once you’ve done that for me, and/or in case – if anything at all – you’d rather read the beast or read the beast as well as listening (you can open two browser windows and have one chugging away as sound-track, should you be that way inclined) – here’s the text.

The English seaside sun is always a generous golden paint-splodge in a clear, powder-blue sky. Foamy surf washes the beach like cool champagne kissing the crust on yesterday’s apple crumble. Beach huts in shades of faded peach and banana yellow and pear green neatly punctuate rows of strawberry-and-cream deckchairs ranged along the pale grey railings of the cracked sea-defences.

A Corporation telescope, unused by human hand since the sixpence ceased to be legal tender, peers unblinkingly at the mysterious, vaguely foreign horizon through a single, rheumy monocle, blurred by salt-spray and chalky bird-poop. Bolted down to rust-stained concrete it knows that it will never, ever, be able to go to Specsavers. Not without lots orange traffic cones, lots of portable safety signs, lots of portable workmen and one of those flat-bed Ford Transit lorries with the crane attachment.

The sand, churned by the grubby, corn-plaster feet of the holiday-making hordes, is nicotine-yellow where damp from the tide and outside-toilet-wall white where dried by the day. Plastic buckets and spades speak of intensive unauthorised but affordable castle building and of moat digging. Furious bright-crimson dashes here and there of sun-worshipper on creaking and torn canvas deckchair tell tales of ‘Who remembered to bring the beer but forgot to bring the Factor Fifty Sun-Block by Ouch O’Reilly of ASDA?’ For two weeks a year their bodies are as red as their noses. Wildly-striped wind-breaks keep the air still, and heavy, and hot.

Elderly Bedford vans parked on sticky black tarmac sell quick-melting ice-creams and the chocolate sauce flows like guest-house gravy. There are Rockets and Funny-Foots and Orange Maids in damp wrappers and cones of vanilla and strawberry stabbed through with deep brown Cadbury Flakes, and all heavily laden with rainbow sprinkles. All also, usually, unfortunately, tragically, in the grasp of other people’s children.

Millicent was one such someone else’s child and she resembled nothing more than a cardboard can of croissant dough that had been left to burst in the sun. Her chief charm lay in the economy of her features. Devil-red little piggy eyes, snotty nose purloined from a passing pug, and a crimson-slash gaping maw. Miniature grasping-hands on stubby arms poked out from her polka-dot “toddler-kini” and a pair of legs like last winter’s parsnips dangled from the edge of her weary-looking pushchair. The pushchair dangled from the limp hands of her weary-looking parents.

Like many such children to whom evolution has proven cruel and uncaring, Millicent was, by way of compensation, possessed of a very, very fine voice. By “fine” I mean “loud”. Whenever Millicent found need of some cool fatty-acids, or frozen protein-group or slushy omega-vitamins she could scream and scream and scream until everybody else was sick. Millicent needed a lot of nutrients, and she always got what she needed.

Millicent was thus, this fine day, the proud First-Registered Keeper of a healthy triple-scoop avocado-fudge one-of-her-five-ice-creams-a-day ensemble, that tottered like three slightly seasick sea-urchins held high in salute to parental manipulation – rather akin to some Statue of Liberty’s torch. These soggy avocado urchins, fearing heights, then jostled on the edge of the cornet, looked the centre of gravity right in the eye, reached the point of no return whatsoever, and plummeted to a squishy end in some partially-melted, cold-hearted, full-fat, high-dive act worthy of trained circus lemmings.

Not one of Millicent’s scoops of ice-cream had been wearing a parachute.

In slow motion Millicent took a deep, red-faced, bawling-breath. Pedestrians paused, seagulls were sucked from the sky, the truncheon-twirling Constable Auden called for the surf to be silenced, for the clocks to be stopped, for the G.P.O. to cut off the telephones, and for the dogs to be prevented from barking with non-juicy taste-free plastic bones.

Mr Sunshine’s rather concerned hand flew to his mouth to stifle an awful ‘Oh good gosh!’.

This emergency would require the skills of a super-hero.

Mr Sunshine projected the shadow outline of Two Zooms, a Fab and a Vanilla Wafer onto a very surprised cloud that had been trying to sneak past without anyone really noticing. It was the equivalent of dialling nine nine nine and asking the nice lady operator for the Seaside Super-Hero Department please, and do hurry.

Dropped Ice-Cream Man slipped down the Super-Hero Station’s pole, finishing his lovely cup of tea as he did so, and landing in his outfit at the bottom. He left his pink and yellow wafer biscuits in the saucer, they would have to wait until later.

Resplendent in straw boater, white flannel trousers, cream and chartreuse striped jacket and a burgundy silk cravat (to hide his “turkey-neck”) he then levitated down from the sky in that irritating way that super-heroes often do, and he squatted on the hot pavement in front of the screaming, tearful, piggy-eyed Millicent.

Millicent, unlike her hitherto magnificent ice-cream ensemble, remained preternaturally frozen, wondering where this was all leading. Millicent’s nose was running and her bottom lip was trembling. This was the most exercise Millicent had taken since she had chased and finally caught a cold all on her own.

Dropped Ice-Cream Man smiled benevolently. He then assumed that “aw – bless!” expression that children-loving adults often do (but only in regard to children that they can swiftly hand back to their parents), raising in Millicent hopes of a replacement cornet, and perhaps some candyfloss for pudding.

Dropped Ice-Cream Man showed Millicent a wholly-intact, truly giant, quadruple scoop multi-cone of peach and pineapple and mango and sardine flavour with Marmite & Marmalade sprinkles and with two delicious garlic-sausages plonked in like chocolate flakes, and he uttered the soothing words that every Millicent who’s just dropped their own ice-cream really needs to hear…

Then, thumbing his nose and blowing a very long raspberry at Millicent, he flew off, stage left, to much applause, taking his ice-cream with him.

Millicent, stunned still into a (sadly temporary) silence, watched Dropped Ice-Cream Man as he flew away, his white cricket-sweater “cape” flapping in the breeze. Seagulls formed up into a v-formation escort around him and, together, they set off to give similar comfort and succour to a small boy near the Ferris wheel who had over-turned his tray of ridiculously hot, incredibly tasty, miscellaneous and unidentified fish fishcake and chips. Salt, vinegar and mushy peas were dripping through the planks of the sea-view bench seat onto the discarded sweet-papers and pre-chewed chewing-gum below. The fishcake, like a breadcrumb-covered wheel that had fallen off something terribly nautical – possibly Captain Birdseye’s roller-skates or some unfortunate mermaid’s scooter – gathered bits of sand as it rolled away to the patch of sparse grass where doggies sometimes did their business. The small boy, entirely to blame for his own nutritional misfortunes, began to dig deep into his soul, searching for his best-ever tantrum.

Holiday-makers and fortune-tellers, beach donkeys and tram-drivers dived for cover behind dustbins and bush shelters and huts renting equipment for crazy golf. One or two with self-knowledge issues sheltered optimistically behind parking meters. 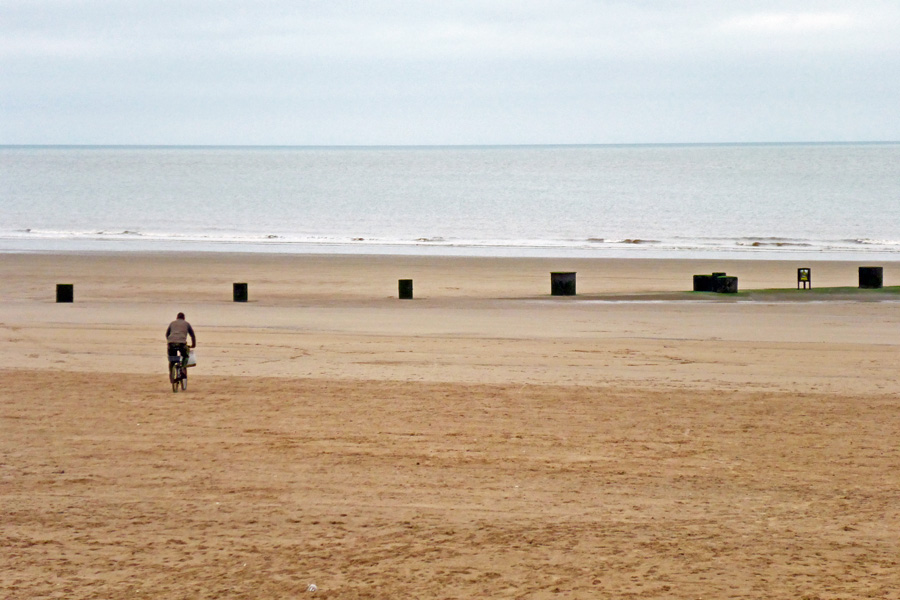 Millicent’s scream circled the Earth and returned to the beach late in the evening of the following day, long, long after Millicent’s bed-time but also long, long before her parents would be assisted from their bar-stools in the licensed bed and breakfast, and poured into their own beds, as sober as High Court Judges awaiting a Jury decision after a case so complex that they’d probably find everyone guilty, lawyers, judges, court usher and all.

Millicent’s parents, boldly emboldened by Dropped Ice-Cream Man’s very bold actions, decided that they didn’t really want children, and that they would tell Millicent as much the very next morning.

Millicent was doing about forty-three and a half miles an hour when she set the turnstile spinning, and she flew the rest of the way just like a super-hero might. Millicent loved going to the zoo.

‘Oh gosh, oh me, oh my’ whispered her parents from the front gate of the bed and breakfast up the hill. ‘Help! Help! Run-away pushchair! Help!’ they muttered very, very quietly, holding on to one another and planning a blissful hippy-dippy future back-packing to Thailand and then onwards to Jamaica and, eventually, Outer Grimsby.

Oh how the lions growled and roared.

Oh how Millicent screeched and yelled.

A fight was inevitable.

For a moment there, no-one quite knew which would prevail, Millicent or lions.

I can tell you now that it was