It’s been stupid degrees Fahrengezundheit around here of late, and today is set to be the worst – on the order of eighty-eight degrees, and no, it’s not a nice dry heat, it’s used and fetid and moist and foul and moan moan moan. 🙂

There is really but one portion of the day when a Hutson may move about, and so I began today at 04:00hrs. Got my jobs done (gazunder times two, manually; rubbish; potable water in a pot from Peter Piper’s handy public tap), finally remembered to squeegee the solar panels and then had my litre of caffeine out on the observation deck (until things became over-warm again at about 07:30hrs when I retreated inside).

This mug, my favoured mug – but only for my morning coffee, not subsequent coffees, weird or what eh? – must be about thirty years old. The colour has faded from the logo (it’s seen out and survived at least two or three dishwashers in its time). 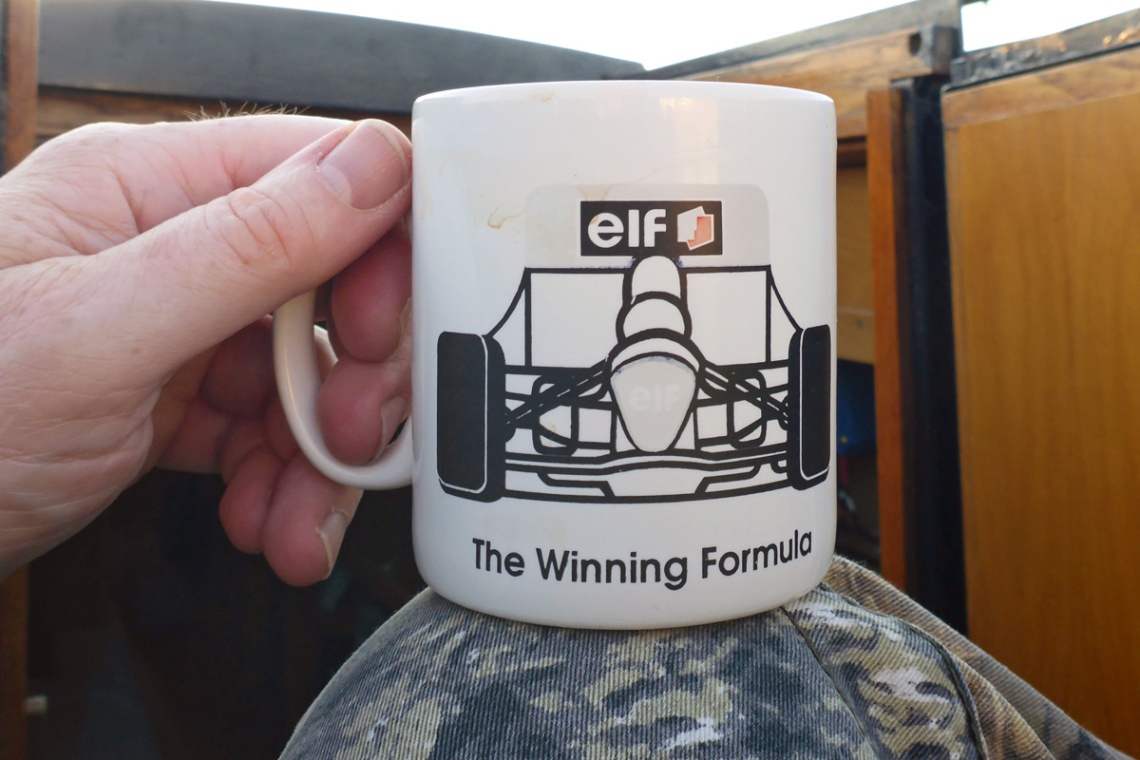 Yestereve almost cooled – “cooled” – enough for me to enjoy a swift six-pack of double pink gins on the starlight deck, and most splendid they were too.

Yes yes, that’s not a conventional glass for gin but it’s one of a pair that my Sis gave me as a present some similar decades ago and it’s suitable for everything from gin to absinthe to dry sherry to Milk of Magnesia. Delicate little things with a spiral bubble in the stem, they have taken just a little bit of looking after over the years, through numerous moves and changes. I take care of them as best I can and enjoy them, and when they go, they go. I shall be sad, but they will have lived a full life as glasses (and a full glass is better, much better, than an empty one).

Four of the o’morning is, at this time of year, in Ingerlund, sometimes, a rather pleasant time of day. Today was no exception – although this was probably long gone five o’day, being towards the end of my jobberings. 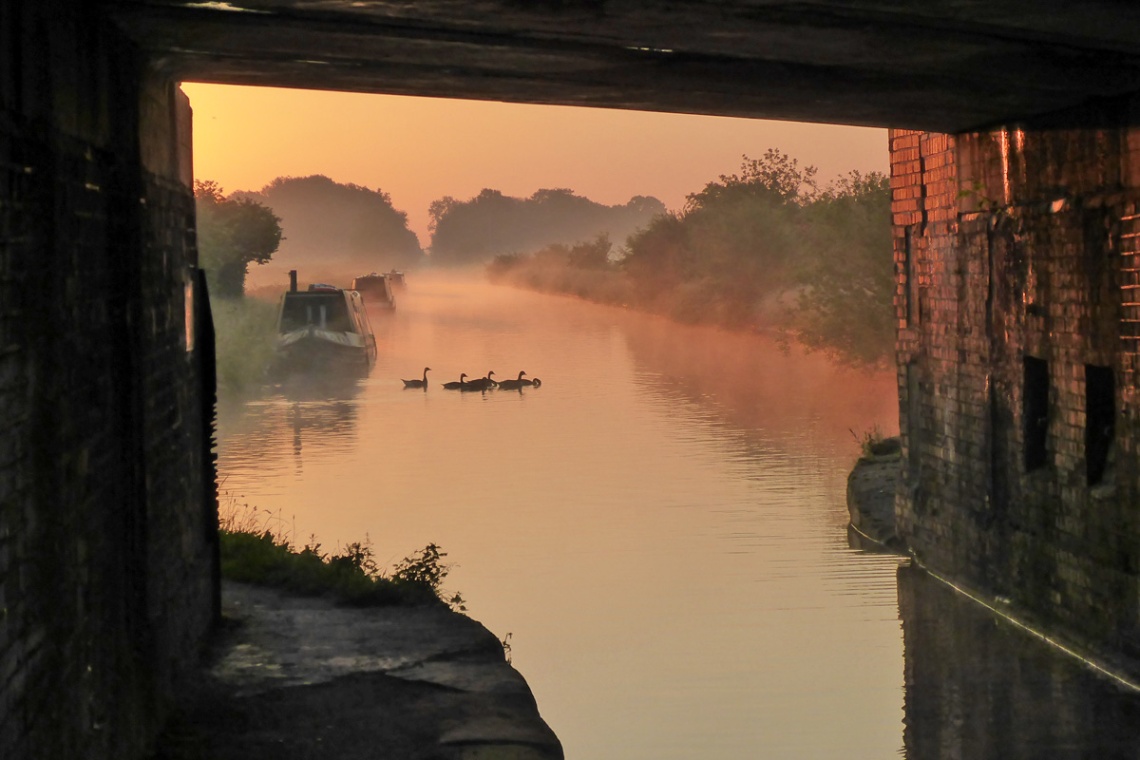 Then the sun rose properly, dressed and put his shoes on… and all was lost. 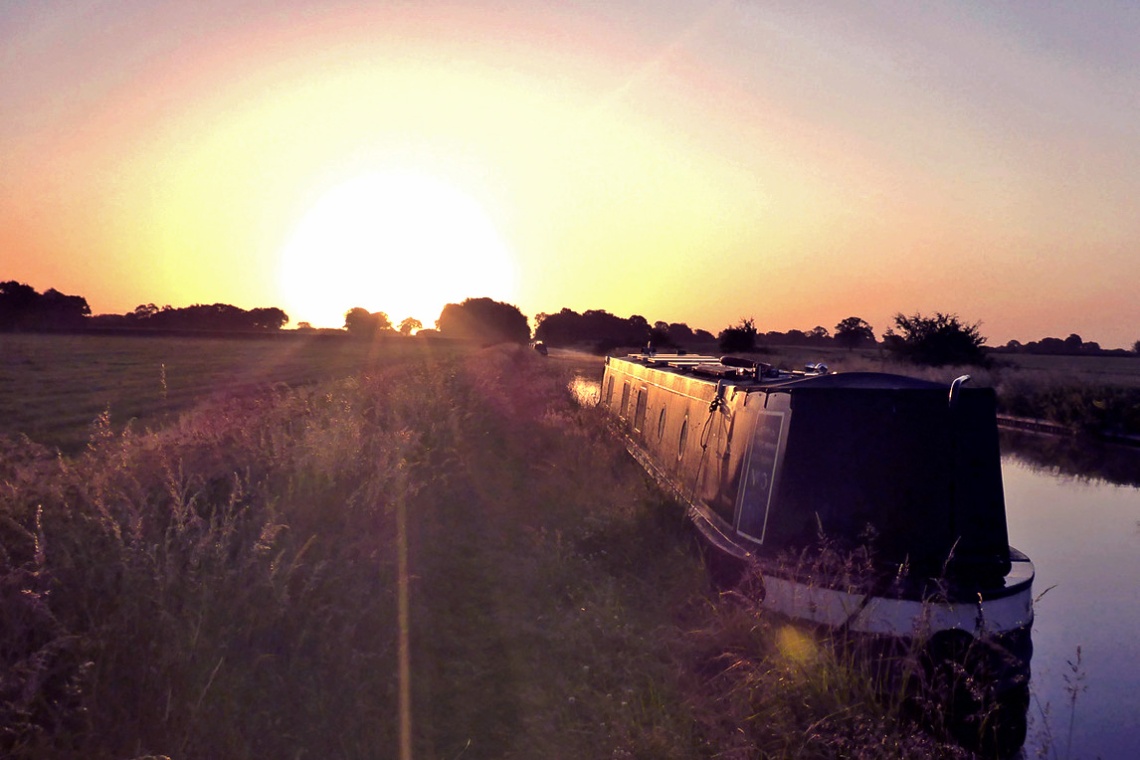 Apocalyptic is a word that has lost and changed much of its meaning of late.

Yesterday was a bit of a wildlife day.

I watched a mink, bold as brass and twice as cheap, trotting in full daylight along the towpath. A big b’ger it was too. I refer of course to the critter in its mammalian state, not once it has metamorphosed into a coat. Note to self – wear ankle-guards and keep the kuckle-dusters about my person at all times.

There’s a very persistent female duck in these parts who, unless she hears the click of my slipping the safety catch off the pump-action fish-slice, is wont to try to fly in the side-hatch. Cute, possibly, but if you’ve ever had a boat covered on the inside with duck-poop, and been seen by strangers emerging covered in feathers and carrying an outraged item of water-fowl, that’s not the word you’d choose to use.

One of a pair of swans upon discovering that I was not serving canal-weed & snail crepes from the side-hatch, offered me not some little physical violence (being large enough to get his head and about six inches of his muscle-bound neck through the hatch). Swans are nasty critters at their best but this one combines a predilection for thuggery with lashings of brute stupidity, and that is not a pretty combination in any creature (you’ve only got to do a short survey of Westminster to see what I mean).

There’s a pair of magpies nesting in a bush on the offside of the canal… and they have made their chosen bug-hunting/yogic-flying/marching-band territory the roof of the Cardinal. When they’re not shitting on the canvas covers they’re stamping up and down the solar panels and biting the radar mast.

Just when I thought that Father Nature and I had come to some sort of truce, and I was sat sitting in my comfortable chair (with a wet flannel on my head and an electric fan blowing over my lungs) I wondered, idly, as most chaps often do, why one of the hinges on the bow doors appeared to have become hairy and to have developed a habit of inching itself down the surrounding steelwork. It took a while for the confusion to clear, and for forelobes to catch up with what hind-brain was trying to tell it.

Yep – some sort of spiked three-inch long black caterpillar in search of a new home.

I put the weed-hatch gauntlets on for that one, lifted it carefully with the electric coal-tongs and launched it into the hedgerow. Extreme caution is my watchword with the creatures that change from one thing into another. I knew a Labrador dawg once that could morph into a King penguin and then a bull-elephant (Indian of course) and then some sort of albino mountain liger that only spoke High French, and all within the blink of an eye.

Mind you, I was on acid at the time.

Really though, I ask you, is this any way for the natural world to behave?

I don’t know if Mr Nature reads my blog or not (few do, if the stats be told), but if so – please, enough already with the bugs and the belligerent birds, send me roaming deer and fleeting fox, and moorhen and teddybear.

And cooler days and nights.

And some well-behaved rain.

Furthermore and notwithstanding on the subject of Nature, some sort of breed of Triffid appears to be moving onto the towpath. I haven’t seen one tapping its own roots yet or moving about and eating people, but it can only be a matter of time. I suspect that this one is juvenile (and doubtless delinquent) and as yet only eats mink, duck, swan, magpie and caterpillars.

Pretty though, and with something of the alien look of the adult Brussels Sprout plant about it.

Exits to the sound of a poison pad lashing about, and wonders what – aside from silly, silly temperatures – today will bring.

Not a gin and tonic on the starlight deck that is for sure and certain, since I have run out of the makings. It’s probably for the best, since with all of these goings on I must keep my wit (singular, over-worked) about me.