Like primary-school age children when the bell rings for playtime, Her Majesty’s Public is rushing hither and thither, not devoting one scrap of grey matter to whether or not they ought. Meanwhile, the “information” and available “data” in re Kung Flu grows ever more diametrically opposed, unreliable and even risible in quality. Get out there and play my little ones says the “government” with one face, while simultaneously changing the law with the other to implement local “lockdowns” (loathe that Americanism, it’s very un-English!). The first of these is in place (the city of Leicester), and the canal rozzers have already swiftly issued notices closing the Grand Union canal which is wot do runneth through Leicester to all but essential movement and to live-aboard boaters (who must move about as much as possible, and die as quickly as may be, and preferably die quietly).

All of the loops of canal around here are far too big to comtemplate when at any moment they may be summarily closed again, and the Welsh canal is still half-closed (a smidgen of it actually being in Wales, with the devolved Welshist DisAssembly making up their own rules at English tax-payer’s expense, ditto Scotland under Knickerless Bludgeon or whatever she’s called).

Manned locks, tunnels and such Victorian delights as the Anderton Boat lift are running reduced services – jaw-droppingly hypocritically – because of the “difficulties” in arranging safe social distancing and other COVID-19 procedures for volunteers (but it’s still fine and dandy and encouraged to run on down, cycle on down or even just have your nurse wheel you on down in your bathchair to “exercise” alongside boats with folk living aboard)…

Hind-Brain woke me late this morning – 04:30hrs – and the madness was upon me, so by 05:00 our ropes were undone and Mr Engine was making the neighbours swear (serves you both a-right for mooring unnecessarily arse to elbow with me). See top photo. 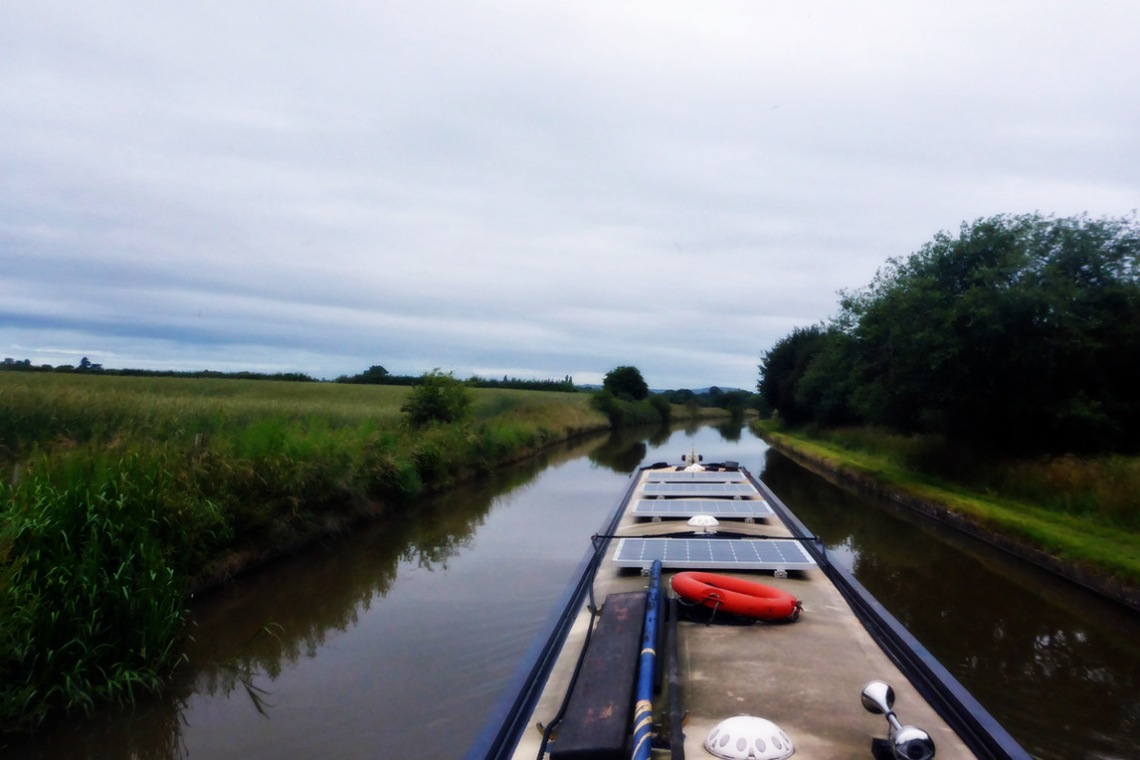 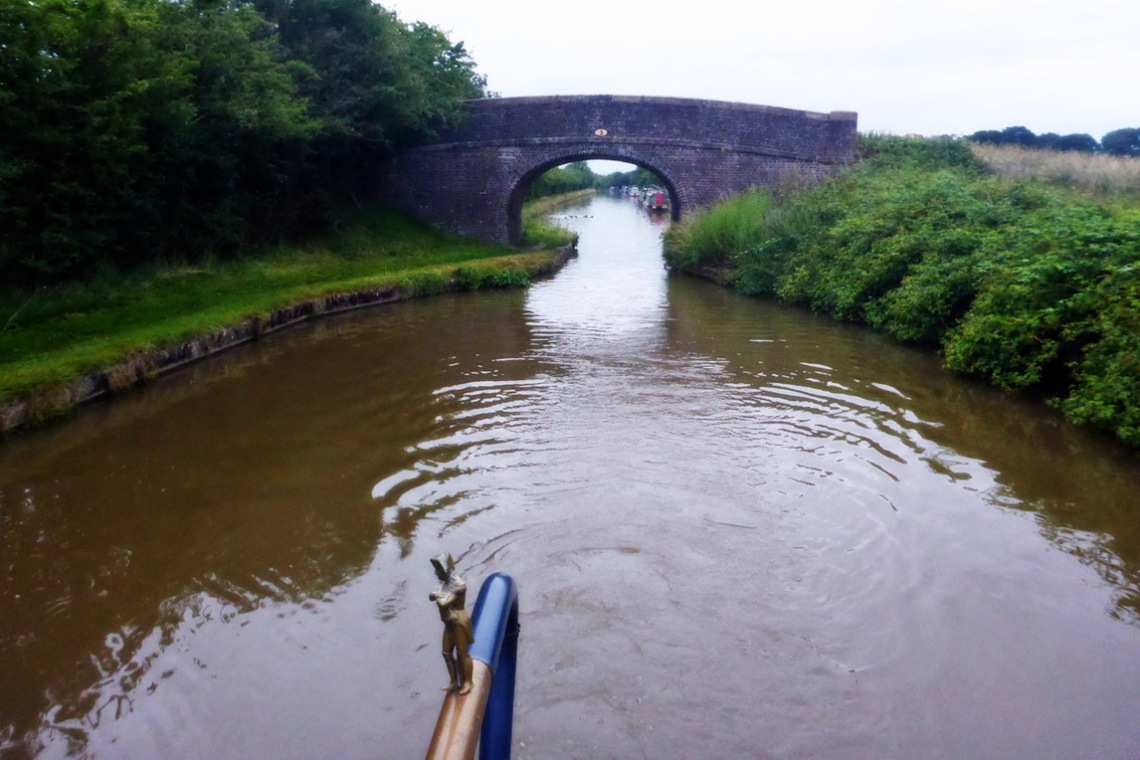 I had a half a mind (just about, if you count the fluff) to moor at Calveley for a while, but the place was full, with fifteen or more boats in a row.

So many live-aboard boaters all in one place, or might it be that leisure boaters have, as they have these past weeks, ignored en masse the restrictions that don’t actually lift until this coming Saturday for them? 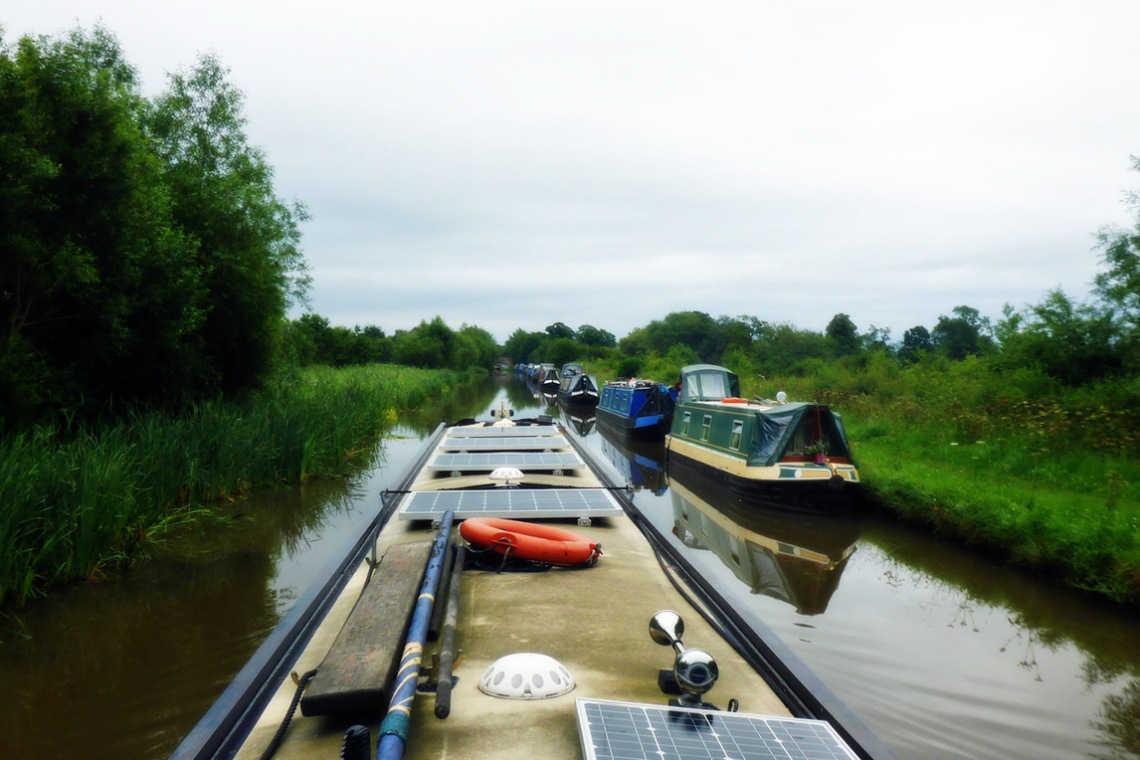 So instead, having availed us of the services, I volte-faced and came back to Barbridge. There’s armco here, wifi signal and little to confuse our holiday hire-boat friends, who are all let loose from Saturday, the 4th of Julie. 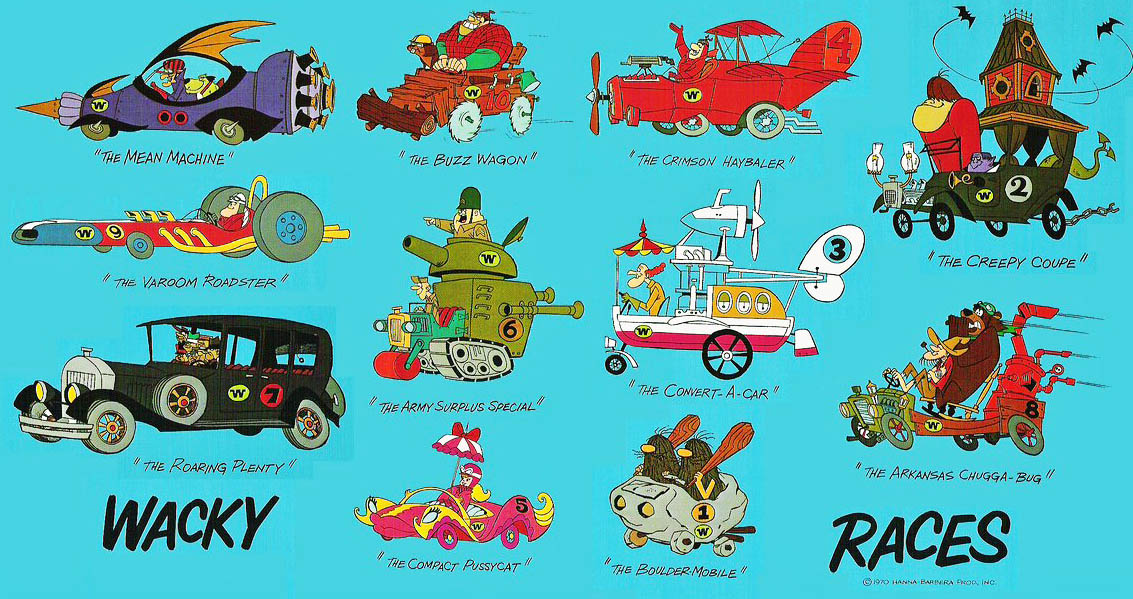 The first wave of hirers will likely be the most demented, it’ll be a tad safer in a week or two for those of us who boat like old biddies, and/or who moor up on long straight stretches with malice aforethought. 😉

I mightily ungruntled a heron on the way. Why heron, when disturbed thus, always fly ahead fifty yards instead of either flying away or to the rear of the boat or even just waiting for boats to pass is beyond me. There must be some evolutionary merit to the habit. 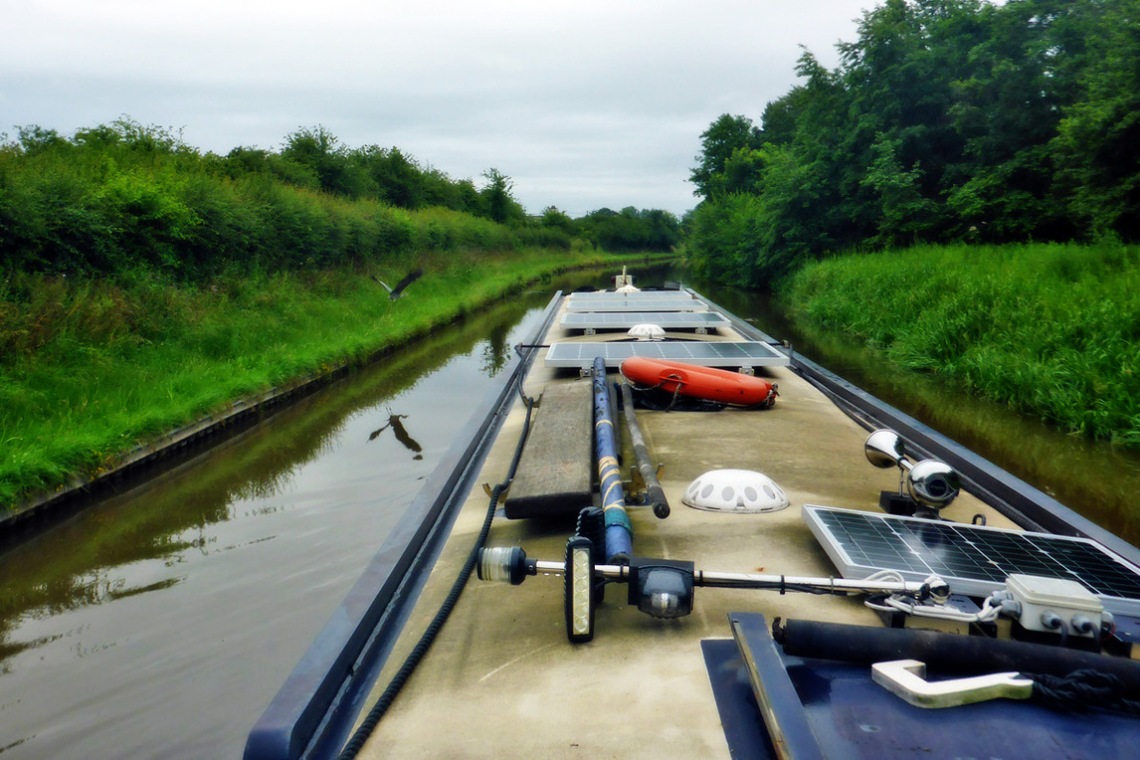 Got moored up and secured nicely before the rains began, which is always good. 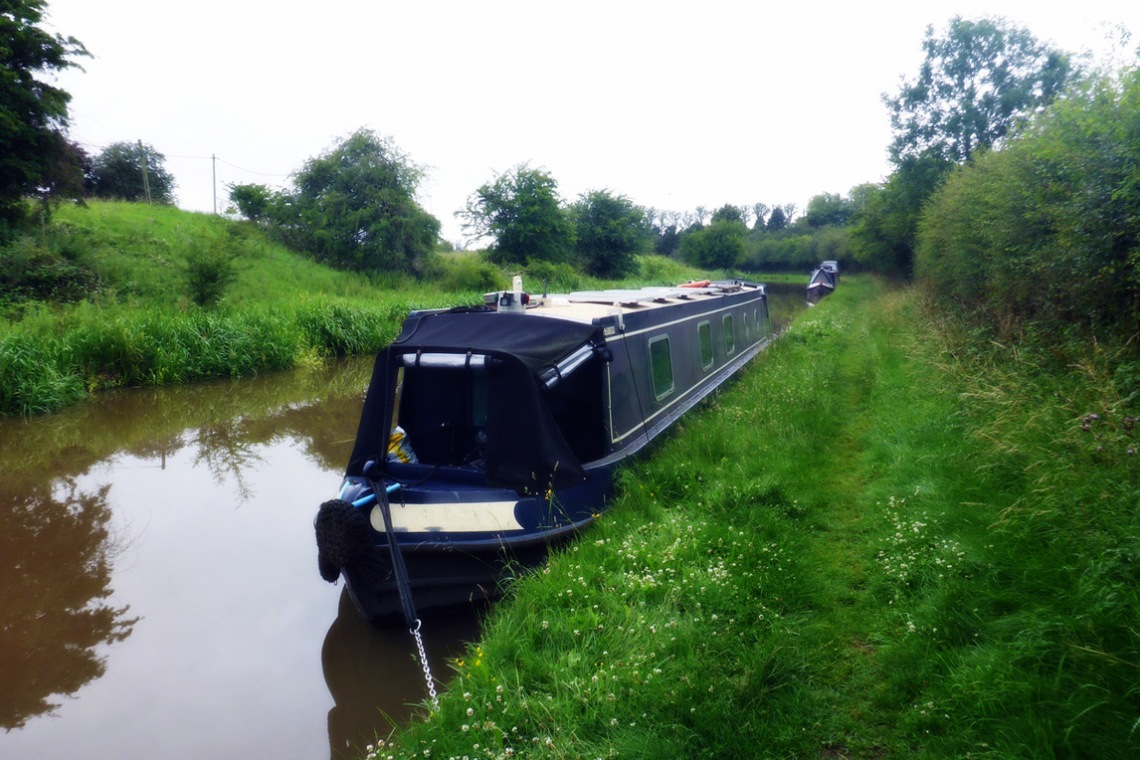 Slightly dull in terms of Das Weather, but a splendidly enjoyable mini cruise-ette for all that. Some six miles from fart to stinish, a brief re-watering, a rubbish dumping, a gazunder-shaking, and a winding at Bunbury included.

I think that perhaps the winding hole at Bunbury is shrinking.

Perhaps space and time are warping there.

Or it might just be reeds growing wholly un-checked.

The back cover is on again and the cratch zipped up against the rain, so very few passing boats bother to slow down as they pass, assuming incorrectly that there’s no-one aboard to note their ill-manners. 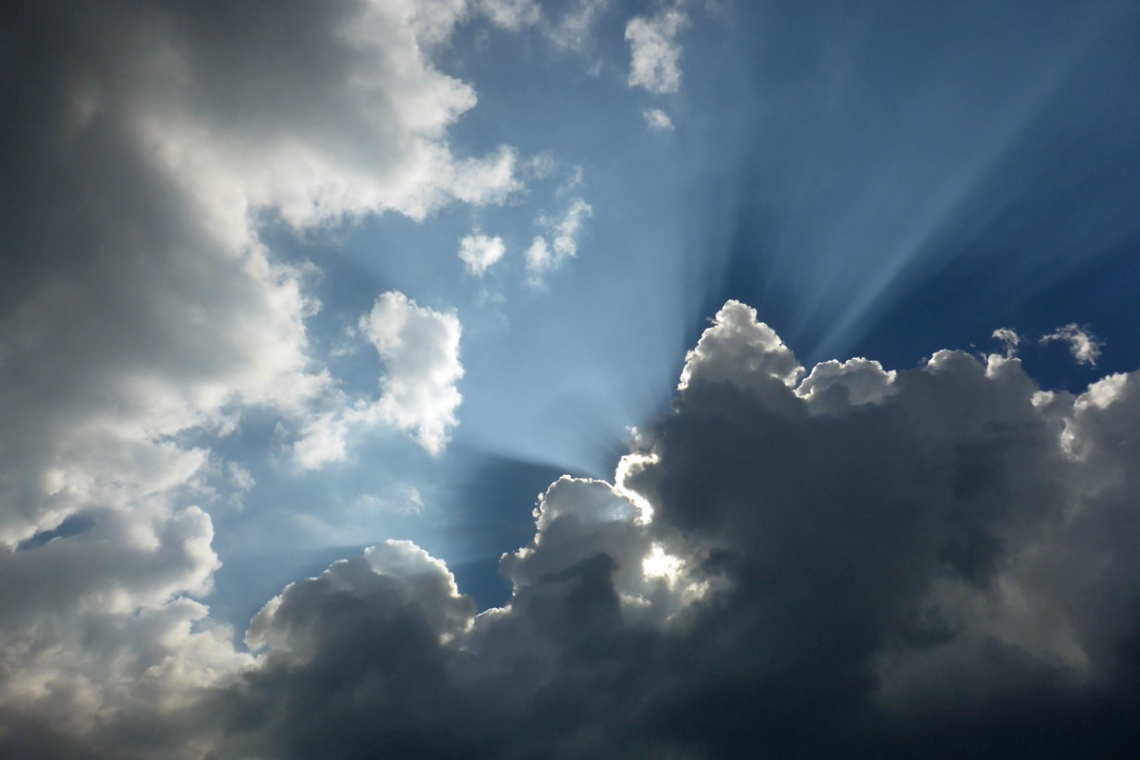 So that’s been my exercise for the day today, and plenty it was too. I might do an aerobic sit-down later, and perhaps some Biro-push-ups while writing a fresh list of things that I ought to get done but haven’t yet. There’s a nap to be fitted in there somewhere, too.

Perhaps another coffee, first, in my rinky-dinky very heavy could use it as a blunt instrument weapon double-skinned stainless steel with walnut handle coffee press… thanks be to they who took delivery for me, it being classed as “Critical Medical Supplies”.

Simple things please simple minds, and the mere possession of a new coffee pot is a pleasure indeed – for me, at least. Boing boing wibble moo fribble de what was I saying? 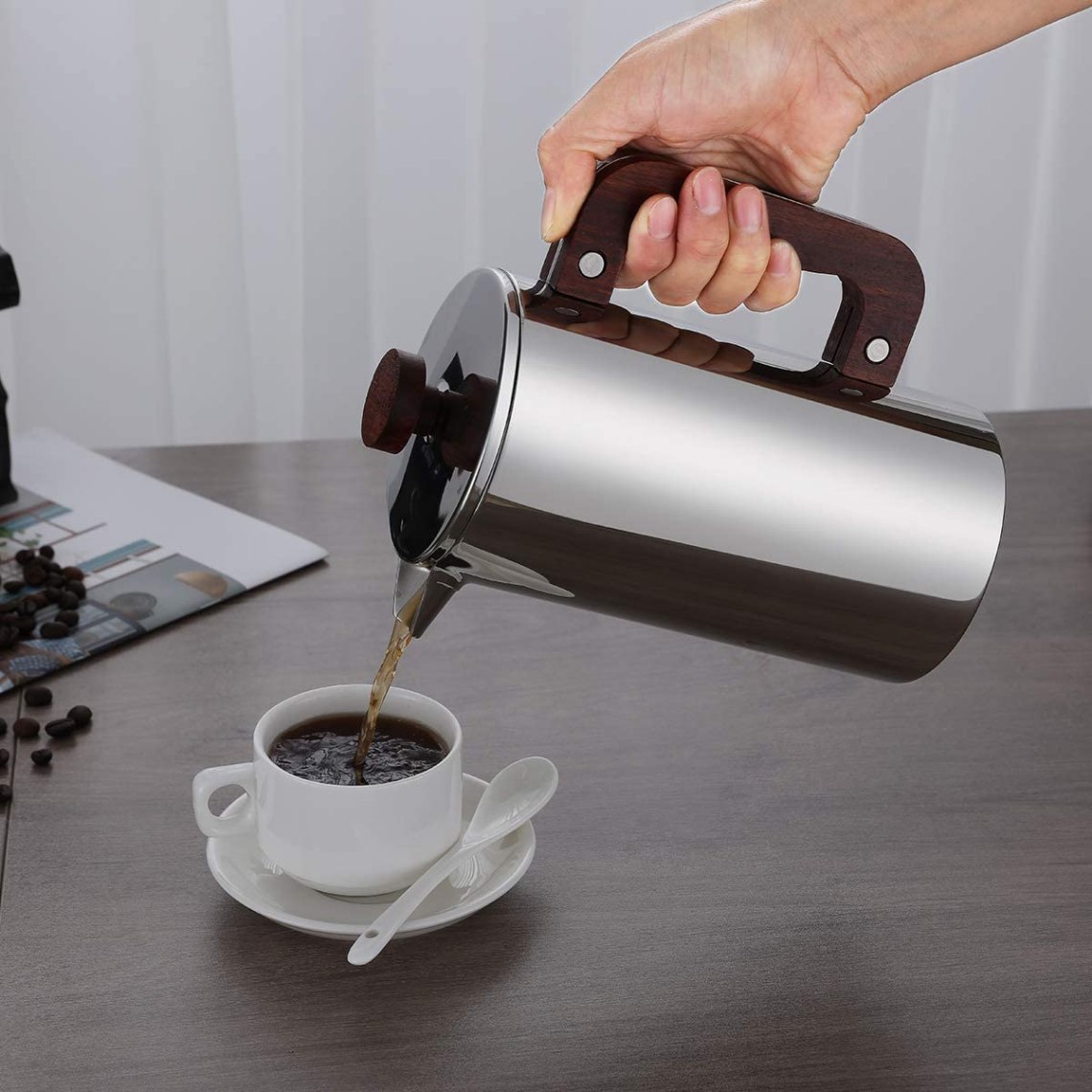 Yes indeed. Coffee, I think, and a long contemplation and enjoyment of that rare and brief feeling of all tanks that ought to be full being full, and all that ought to be empty being empty, post service-area visit.

Then a snooze-ette, one eye at a time.

You know those websites that show you real-time flashes and details on a map for lightning strikes? There must surely be one of those by now for “local lockdowns” as they pop up and then disappear again.

Even if there’s no-one in England who can write an “app” to track & trace scabby peasants with COVID-19 Scrofula, there will surely be someone who will be coining in the advertising revenue from a site showing which roads, footpaths and bridleways (if not perhaps canals) are open, closed or blocked by emergency funeral pyre smoke.

Ian H., moved again, just a little bit, so yah boo sucks to you (and you know who you is).