I am a mere youngling but even I can remember the era when if a Prime Minister made an appointment with some sixty million people, he kept it, or at the very least explained the three-hour delay and apologised.

I’m just old-fashioned that way. I shan’t even take a sideways sashay into political buffoonery and the collective inter-personal skills (and manners) of seagulls nesting on a cliff-face.

So, it’s to be four weeks (doubtless plus) of lots of no-movery unless you’re shuffling to your shift at some Fritz Lang style factory or being squashed into an old Bedford coach to be taken to an institution of learning wherein to be educated in the manifold ways and means of the systemic evils of western society. Were there actually any cogs in Richard Parry’s brain – he who sits his buttocks upon the Wellness Trust Ltd (formerly the Canal & River Trust Ltd) – then I am sure that we would hear them grinding.

Winter stoppages – the planned maintenance works – officially begin today (the “season” for these being until the end of March), but the furlough scheme is to be extended, covering 80% of the pay of the peasants if laid off… which will win out, saving a cheap quid here and there, or actually doing the very necessary jobs, a lot of which (as palpable victims of coronavirus) have been postponed since last year? One factor that I know won’t feature in his tabular comparison (in green crayon on lined paper) is the convenience of boaters! Will the PM’s rectum-felt plea for the “construction industry to continue” complicate decision-making matters?

Leaving aside the metropolitan snowflakery of the “directors” (it is a Limited Company) and the who-the-hell-are-youness of the “trustees” (the insubstantial and wholly ineffectual skirts behind which the Ltd Company tries to hide), the grunt workforce – the “good guys” – the genuine workers – of the Wellness Trust have been out and about, doing impressive and workmanlike work. 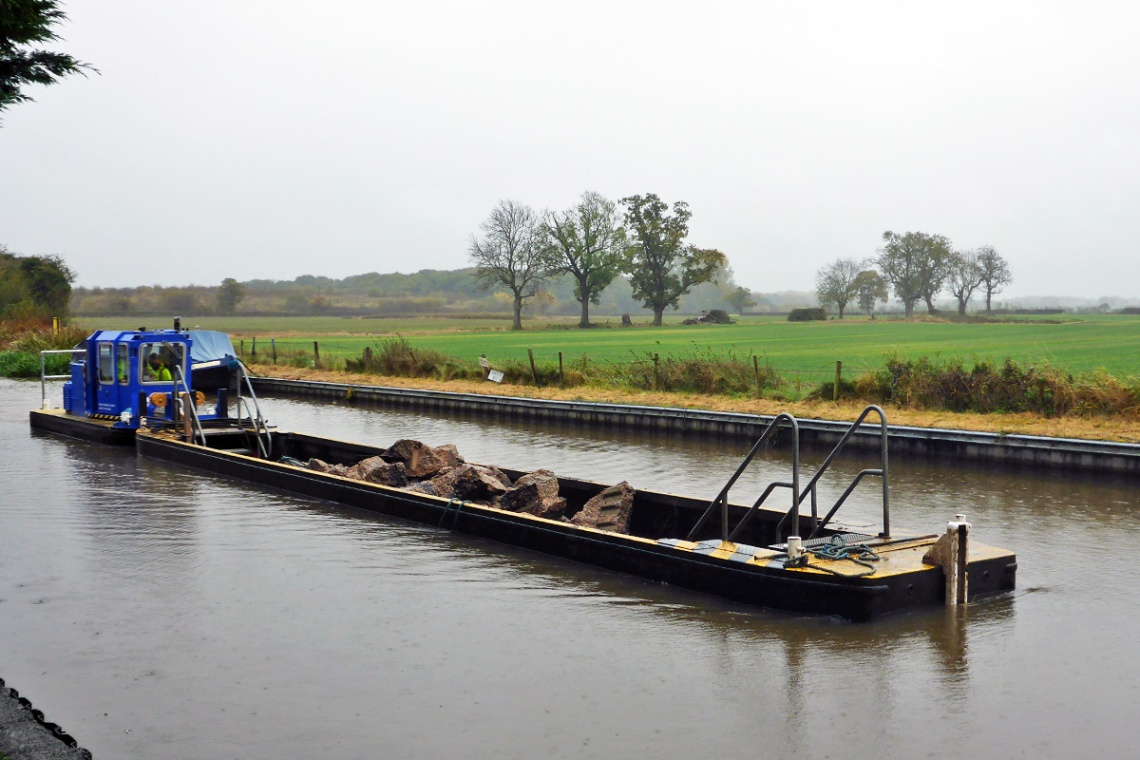 I think they’ve been replacing the edging along the towpath just a little way ahead of where the Cardinal and I are moored. After a couple of centuries the stonework had begun to slip-slide into the canal, and the towpath – already narrow there – was in danger (danger, Will Robinson) of being swamped.

Whatever happened to Swampy? Does anyone know which Correction Camp he’s in and whether he’s had any Red Cross parcels of late?

Shall the orders go out from Wellness Central that all live-aboard boaters must move move move, as they did during the last “lock-down”, or shall we be entreated to make only essential movements (for food, potable water, and to get rid of onboard movements)?

That, given the lack of cogs aforementioned herein, is an unguessable guess to ask. Will the emails from the Giant Throbbing Brain-Gland of Parry et al be barking contra-legal, distinctly unfriendly orders again, or will they, as of late, be p*ss-weak watery things simply entreating we rotten boaters to “follow government guidelines” (without actually admitting that they too cannot possibly interpret what those guidelines are supposed to be)?

We, the Cardinal and I, are on some quite pleasant moorings at the moment, but we are a little farther away than is my custom to walk to and fro my ‘… a single-adult household may form a support bubble with one other household …’ support bubble. Once the breeze becomes more civilised we’ll be mooching on.

When shall our support bubble meet again, in thunder, lightning, or – as here – in rain?

Or perhaps in sunshine? 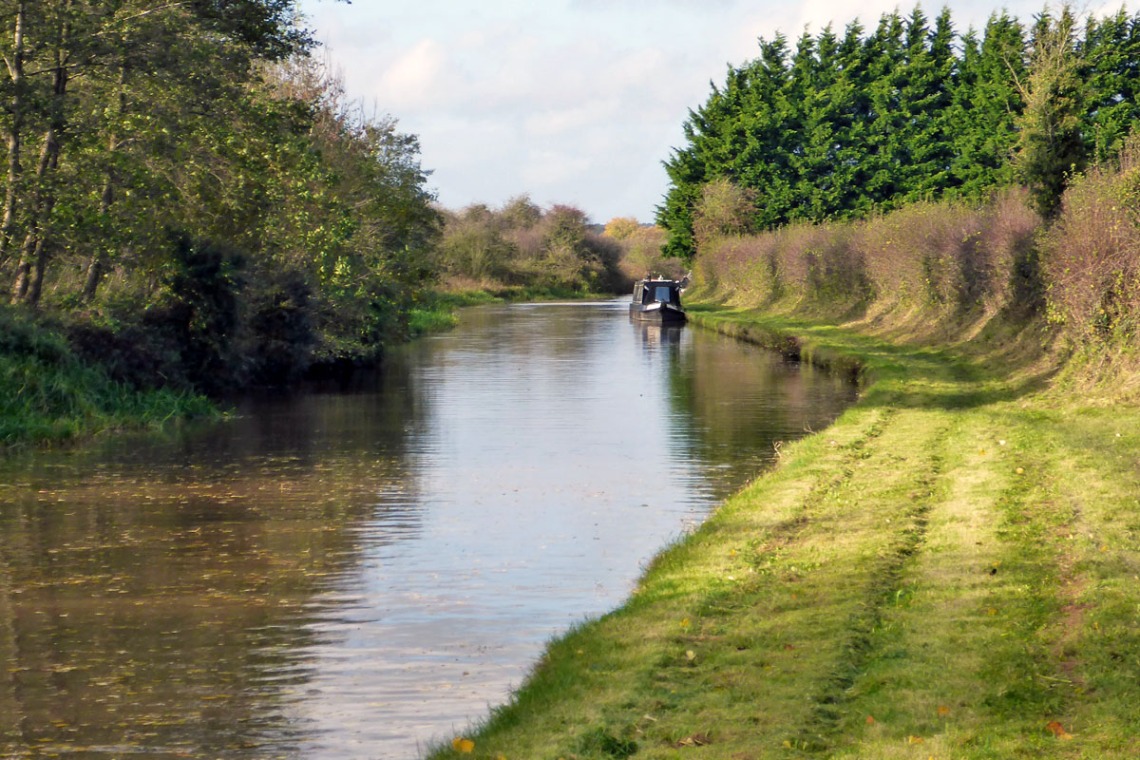 It’s been too warm for a stove, really, of late – and yet too dull, grey and dismal (most of the time) to do without one.

Not having been born yesterday nor yet the day afore, I paid over another thirty pieces of silvery soul and managed to snag an Arsebury’s delivery – in these panic buying times, this singular slot shown to me being on Saturday next. I did done this before Doris’s – I mean Boris’s – announcement of national house-arrest. It hasn’t been cancelled by Arsebury’s yet, we shall see once again if they are too busy virtue-signalling (“feeding the nation”) to actually, you know – feed the nation. One pack of Le Bog Roll, and pasta sufficient only unto keeping sody and boul together for four weeks. I am not “panic buying”, I am – if you’ll pardon the modern and disgrammatical nature of the sound-bite – “pragmatic buying”.

No idea what this latest El Lockdown will do to the canal traffic – strictly speaking the “horse-pit-ality” industry is closed from Thursday, so the hire companies that are still trading will be royally stuffed. Again. Come back in, nb Number Seven, your government says that your time is up. 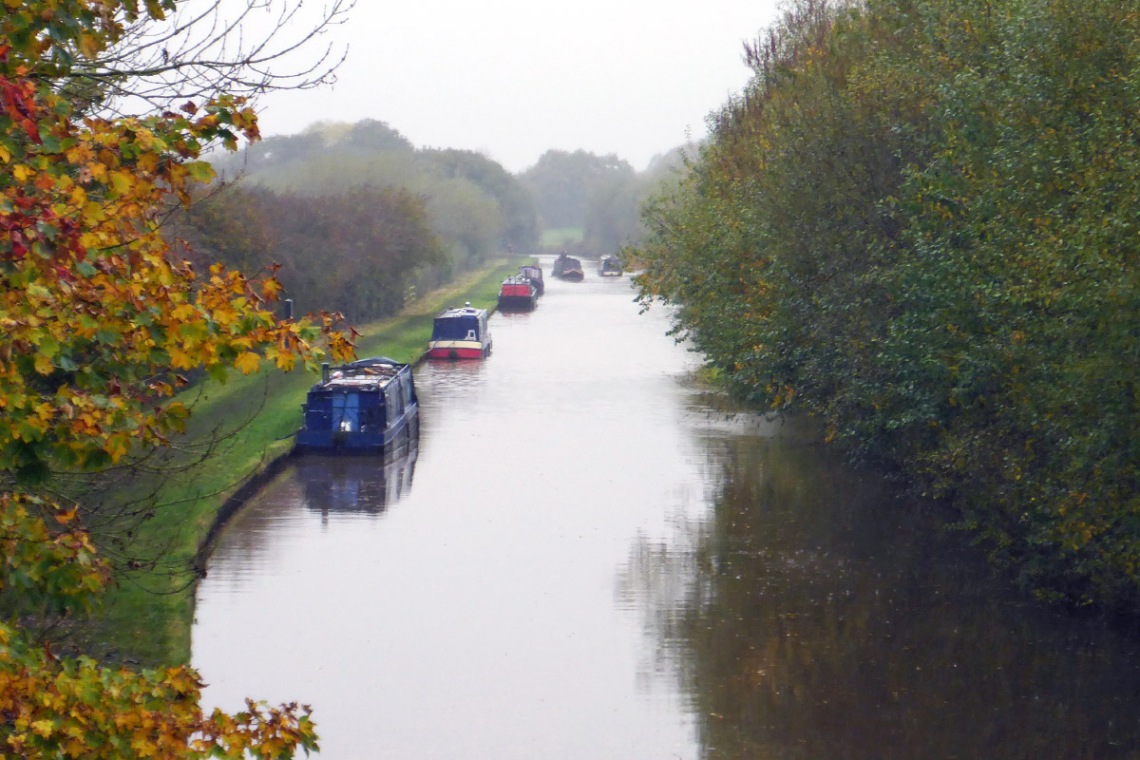 Apparently these four weeks will work pantodemic wonders by reducing the “R” (reproduction) rate to one or less. Is it so very wrong of me to have noticed that one of the graphs used by H.M. Government during Doris’s tardy announcement showed this “Arf Actor” to have already been under one for June, July and August? You know, until they kicked those little smelly vectors of disease, children and older students, back into their institutions of indoctrination… If three months under a scientific “one” didn’t do the trick then why might another four weeks so now be more efficacious? Am I being silly again?

I don’t know, silly me, grasping for shreds of reality where there is none to be had.

There are boats moving today, just a few so far. Presumably either care-free and oblivious or else moving in order to get back to base, or to preferred territory. I’ll be moving back to “preferred territory” myself in the next couple of days. Mars, perhaps, or, failing inter-planetary escapism, a few miles along the canal.

Whether I’ll take my mind along with me this time we haven’t yet decided.

A mind just seems to be so much surplus baggage in these Interesting Times.

Batten down the hatches wherever you may be, and get used to the idea of spending weeks (and more probably months) poking at passers by through the windows with a stick.

These “Interesting Times” are going to get a lot more “interesting” before they – nope, they won’t ever get better.

They might get more comfortable again, but when we wake up we’ll be deeper into the thrall and service of global business and deeper still in the pockets of some very, very dodgy and shadowy “politicians”.

In the words of Shakespeare, ‘Oh bugger, Matron.’

Chin-chin, chaps, for the mo.