My childhood was a bit “boom and bust” in terms of the family fortunes. This is probably why I have squirrel-like tendencies come winter (and spring and summer and autumn). Unless I’m actually sitting on a pile of acorns my hind-brain has no idea where my next nut is coming from. After this year’s shananagins with the now-you-see-us now-you-don’t we’re-feeding-the-nation-not-so-fast-Hutson-not-you Sainsbury’s – surely now the worst “super”market this side of the Hell branch of WOKE-Groceries-Ltd., – Messrs ASDA finally allowed new registrations, and I done did it.

They called yesterday with a small but perfectly-formed van full of comestibles, and they arrived promptly and with only one minor change and one minor substitution. Delivery window was 0800hrs to 0900hrs and I was back aboard the Cardinal at 0820, sorting packets and jars into strict size, shape and colour order before tapping each one three times with the tapping stick, bejigging a small jig and offering thanks in Latin to Edesia and Bibesia.

The madness remained upon me after victualling and Messrs Weather & Co., while looking grim, looked dry so I set about loosing the Cardinal’s ropes. The moment the centre-line was free of course yonder heavens opened and verily and lo, the rain it did fall. Wet got I. Soaked also got Phil, the gentleman of the lock of this year, as he worked me down through Cholmondeston. I offered exhortations to retreat to the dryth of his canvas, but he declined and, as I was half-way down in the lock, advised me that he was to be collected that day by friendlies, and taken to a place of brick and indoorery for the remains of winter.

[Havin’ thus been caught on the hop I went back after mooring to say a more formal g’bye and farewell, only to find that he’d already gone, and only the unturned sod remained. See image below.]

Venetian Hire Boats and Chandlery provided a splash of potable water, a dash of diesel and an opportunity for gazundering, thank’ee kindly. I took the opportunity of being (temporarily) tied up again to change coats into something more waterproof, whereupon of course it (temporarily) stopped raining.

Having waited for the water tank to fill – it was as low as it has ever been allowed to be, and required some eleventy-dozen litres to brim – I then mooched on via the winding ‘ole (Olé!) and re-moored facing das railway line, so that my inner-spotter and geek might better see the odd peculiar train passing (and there are many such on this line). 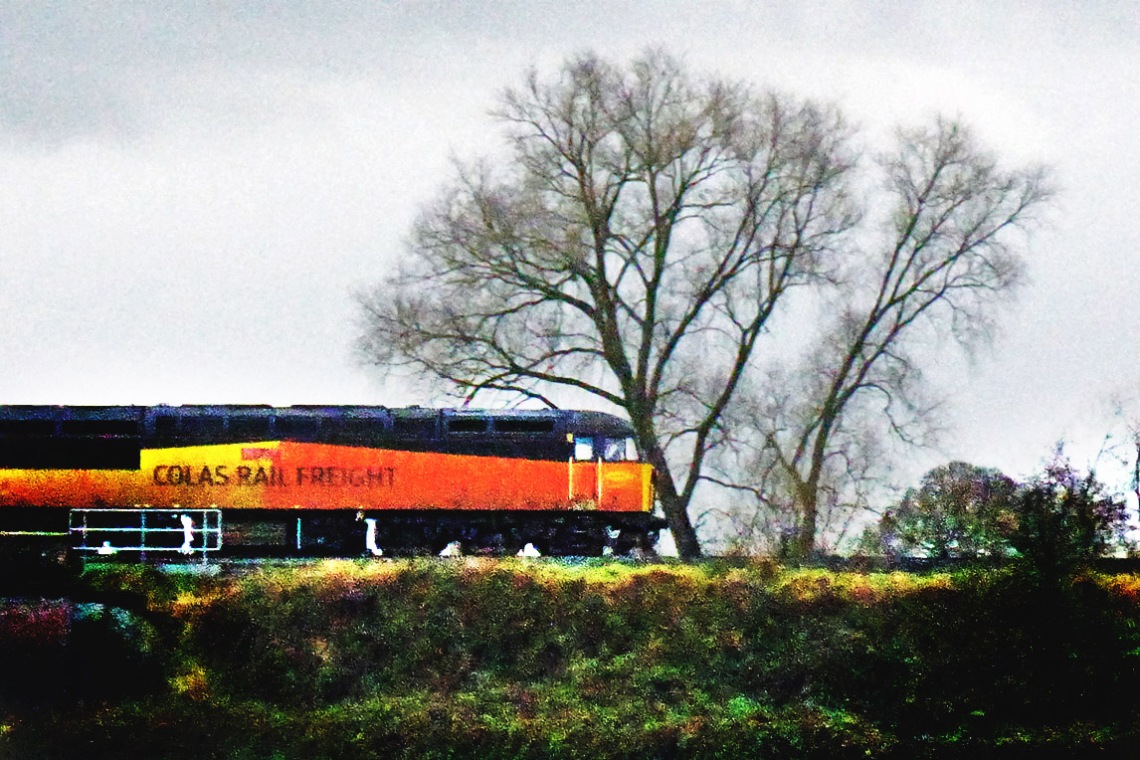 As of the moment these fresh moorings are only slightly crowded…

…although such may change in an instant, especially now that we’re no longer in El Lockdown II but in Tier 23, or 42, or something. The Gubbermunt says that ‘…boats both residential and leisure may move providing that they have aboard at least two but no more than three fresh haddock, are steered by a person of restricted growth who was formally christened under the name of ‘Dave’, and while carrying a small wooden spoon made from birch felled during a Wolf Moon made freely available under oath of fealty to the original ticket-holder and/or their proxy…’

As far as I can tell, anyway. I shall check again later, to see whether a pig’s bladder on a stick has been added to the rules, and which trouser leg I must roll up post meridian but pre-tiffin.

The weather couldn’t make its mind up after I’d re-moored. I got hold of the Met Office on the short-wave radio (channel 16) and asked for detail on what the weather was to be like, and their reply was ‘Yes.’

It all got a bit dark…

…and then it got just a smidgen brighter and lighter, before it went really dark.

So that was yesterday.

I shall have to go out for a walk soon. If I don’t go soon then I shan’t bother all day, and that wouldn’t sit well with Nanny. Mr Stove is doing his best to cheer things up, and the stove-top fan has developed a jaunty rattle and clonk, indicating that combustion is taking place at a healthy rate.

Once I’ve perambulated and performed at least a minor peregrination I shall have to sit cross-legged in the galley, staring up at a mountain of comestibles and thinking that there’s nothing aboard that I actually fancy for lunch or tiffin. Plus ca change, plus c’est la meme far too much choice and a clinically-acquired lack of decisiveness – a heady mix, if you’ll pardon the pun-ette.

It won’t last long of course, not with me around.