I don’t generally indulge in the fad for “selfies” but the light shining through the bridge behind me rather insisted on this one. They do say that the Sun always shines on the righteous. This image just proves that the Sun perhaps needs to get itself to SpecThavers… since that can be the only reason for it to shine upon me!

I am not knock-kneed, and nor am I wearing a skirt or an over-sized tam o’shanter. It’s just that there are only so many ways in the space of a few seconds of arranging one’s limbs while taking a photograph and refraining from falling into the canal. Back a bit… back a bit more… sploosh.

The Cardinal and I moved again yesterday. This ice was forecast, and strong winds are – once again – on their way, and when I woke the madness was upon me. We serviced and we mooched. An oddly good decision.

Anyway. Although only a couple of miles, it was a most pleasant cruise-ette, and ticked all of my boxes. It was mostly just me and the Cardinal and the moorhens.

The world hereabouts was well and truly frozen this morning, and even the canal had a skim of ice in most places. The frost had the phenomenal benefit of converting the mud mud mud into something pleasant and solid to walk on, thank’ee kindly.

I got out and about for walkies at first light, which isn’t saying much at this time of year. At least I remembered a., to get dressed and b., to wake up and bank up Mr Stove, so that the Cardinal would be warm and especially welcoming on my return. The advantage of Christmas Day is that fewer folk than even usual are out and about; one jogger, one nutwit, the lovely folk from Rosie II and the lovely folk from Caramia. The demands upon my communication-gland were light and easily-managed.

Apologies in advancement excelsis for the manifold images, but this morning was very pictureskew (sic), and I had to keep my clicking finger warm by keeping it constantly on the move.

This is the Cardinal at his current moorings, third from bottom of frame.

Stripes, stripes, all was stripes. Moorings Alley even managed to look serene.

The ground was crunchy and cold underfoot. This is much better than being crunchy and cold overhead. Ground ought always to be underfoot and, if it’s not, then you’ve done something wrong with the process of walkies.

You can’t beat a good tree or two. 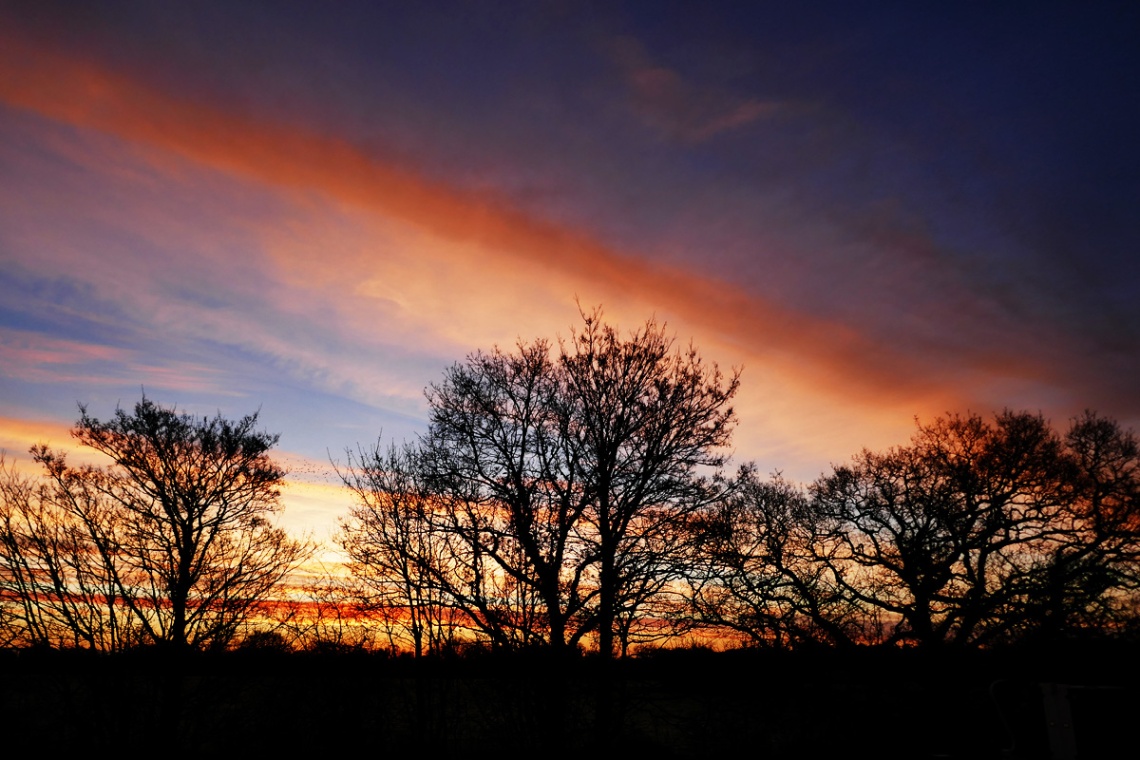 The image below is of the (full of) eastern (promise) or “Turkish Delight” end of Moorings Alley, and you can see that the canal water has gone crinkled and hard overnight. Do fish under ice suffer from claustrophobia, I wonder? Fish in rivers and canals, I mean, not fish under the crushed ice on fishmongers’ slabs of course.

Have I mentioned that when the clouds are performing well you just can’t have enough trees to go with them? 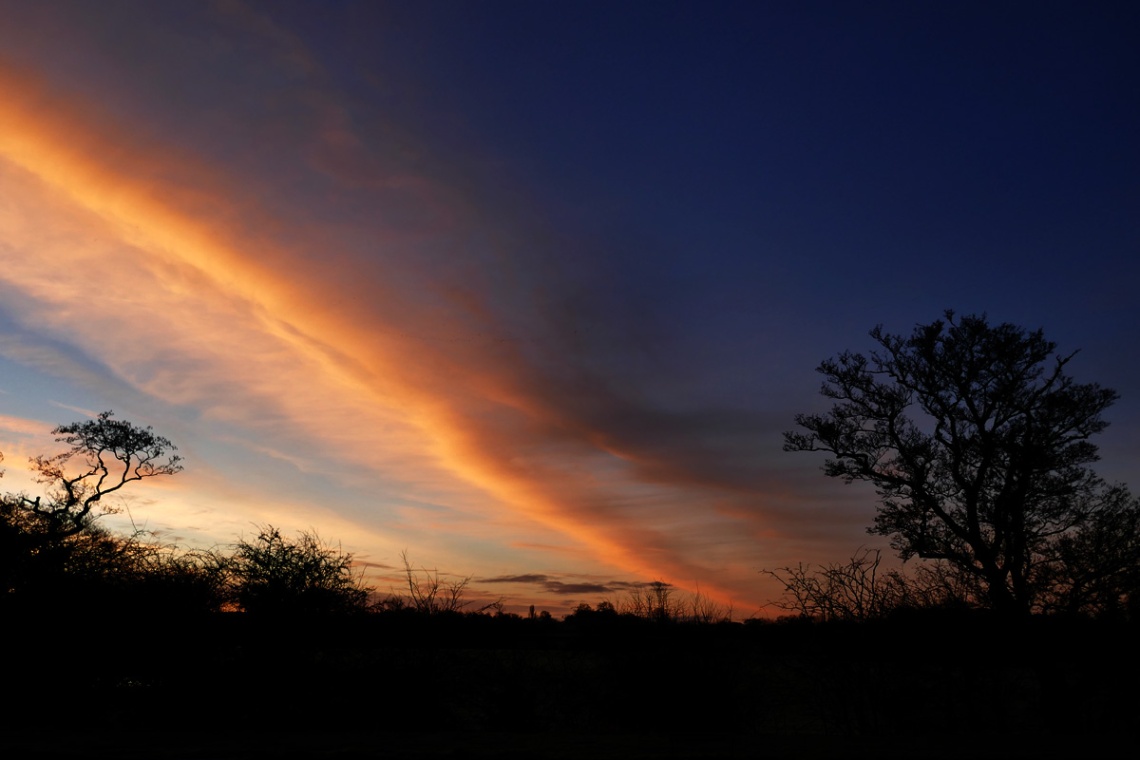 The light was amazing on this morning’s walkies, different at every turn. I turn a lot during walkies. Most people think that I have lost my balance, but actually the Derling Whirvish act is simply to stop people from bothering me. It works a treat, unless you are unfortunate enough to encounter someone who has similarly lost their grip on reality.

It seemed to take Mr Sun quite a while to drag himself from his pit this morning. Perhaps he was hung-over, or perhaps Father Christmas had asked for a delay because his deliveries had gone into extra time? Who knows? 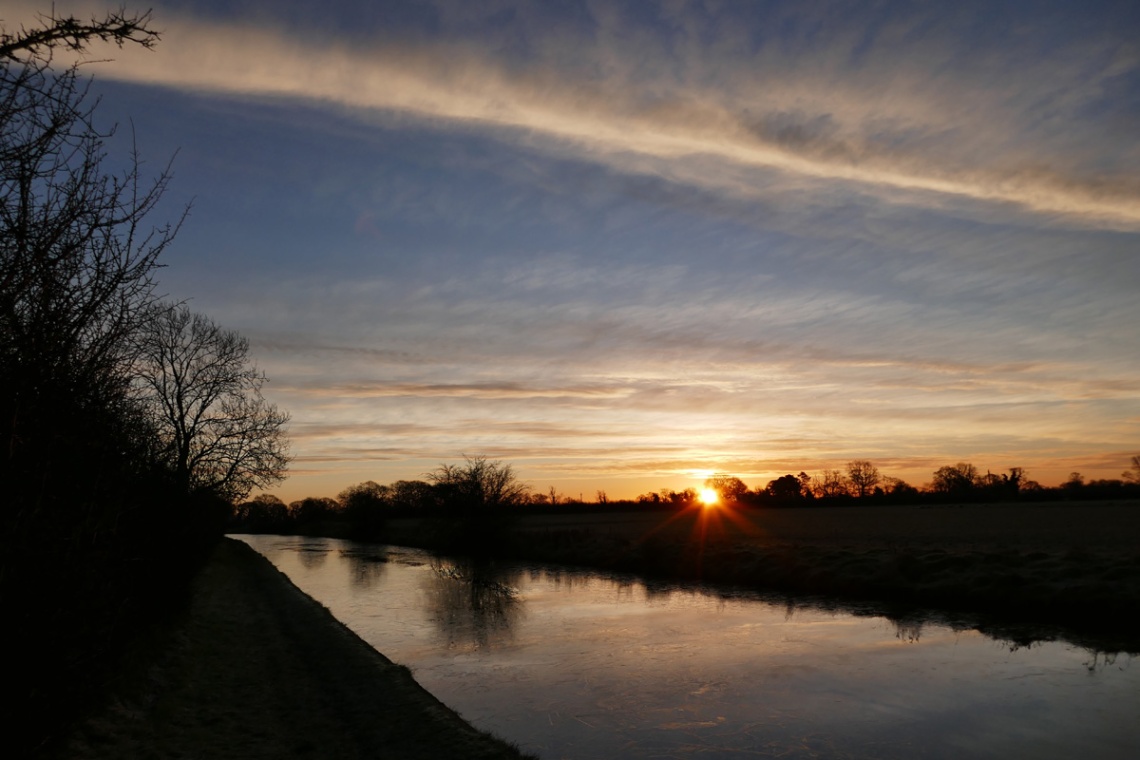 Smoke filled the air at the main Barbridge “visitor” moorings. Fortunately, it was all quite intentional. I call it the “Take this, annoying little Miss ReGretable Thunderburg” effect.

A wander down towards Hurleston was called for, and so I done did just that.

Mr Sun continued to raise himself from his pit, and some of the bridges co-operated nicely.

This one looking quite different depending upon from which side one viewed it. I’ve looked at life from both sides now, from win and lose and still somehow it’s life’s illusions I recall – I really don’t know life at all. Nor bridges neither. Not even the Madisons of Bridge County. 😉

Which pithy introspection brings me to my second and – of the day – final “selfie”.

I am a shadow of my former self.

As, sadly, is the day now that it’s turned to the more usual dull and grey, damn it.

I was going to have Heinz Baked Beanz on masses of hot toast for Christmas lunch, but I forgot what I was doing in the galley and prepared some festive pasta instead. Once I’ve published this I shall dive into a Borg-a-Shmorg (I know my foriegn languages!) of Hendrick’s gin (thanks Bro), chocolate from Fortnum & Mason (thanks Sis), a chunk of rather pleasant iced Christmas Cake (thanks ASDA) and my favourite DVDs (thanks Master & Commander &etc). Then I am going to check the roof for loose-ables, put an extra bungee on the rear cover, zip up my cratch (ooh er missus!) and see if I can sleep through Boxing Day until the gales arrive – and depart.

Don’t be judgemental – it’s a plan.

Merry Christmas and Happy Wotnots to all of my reader

The Cardinal and I hope that you have had and are having a splendid time, wherever you may be.

Now, I must throw another peasant on the stove, wash up the pots from the pasta, and lay out my afternoon.