It looks like just a skim though, rather than bolar-pear territory. Doubtless it will make some horrid noises later on today when Messrs BARGUS comes cruising past with coal. Notable Benny; the phomatograph aboveski was taken yesterday, when the canal was still almost entirely liquid (don’t ask about some of the solids that float by).

Yesterday’s ‘sweather was the full Woolworth’s Pick & Mix. At one point it snowed most deliciously but by the time I’d finished my procrastinations, laced my boots on and told Mr Camera what I wanted I stepped off the boat and the weather ceased. Cue the John Cleese shaking fist at the sky moment.

The beginnings were quite promising. Solar Panels & Co. Ltd had a minor treat. 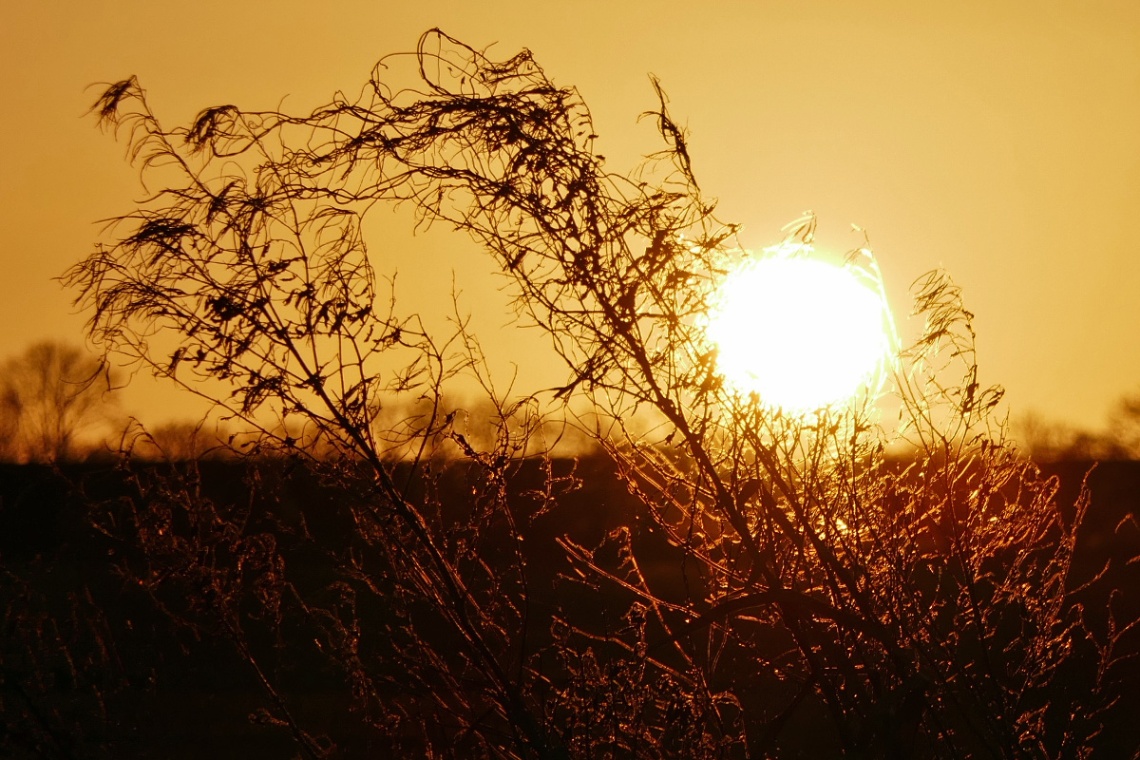 We had wind. Well, the weather had wind, I declined. Look at those white-horse rollers on the canal…

Mr Stove had his work cut out for him then, as he does today. We’re still on the All-You-Can-Eat Menu.

The evening, over-painted tart that it often is, posed without shame, happy to for once not have to rely on the old “selfie” stick.

This morning, however, we are back into chocolate-mint territory with a sky so dull and grey that I imagine we must be inside the skull of some political “world leader” (Diane Abbot perhaps). 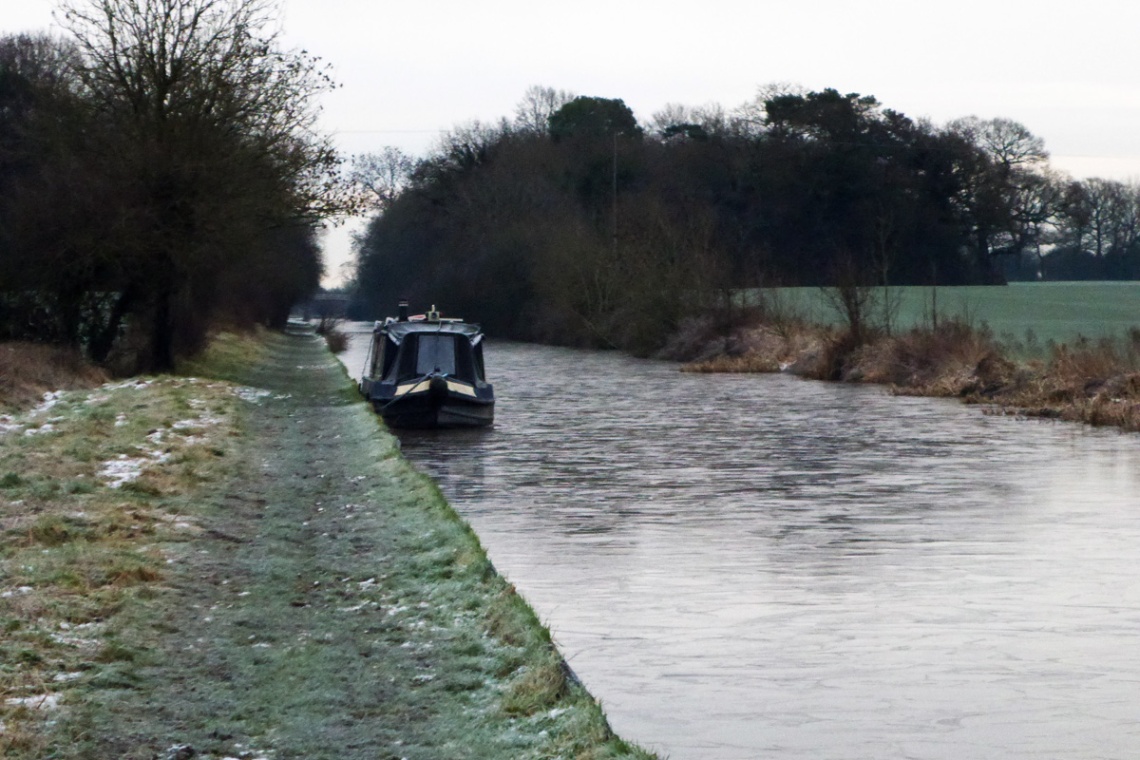 No waves on the water this morning, just crunching, cracking, sonar-ping sounds from some bargain-basement ice.

Mr Stove will have his work cut out for him until probably half-past April.

We are fair surrounded, not by Native-American First Nation Indigenous types, nor yet by cowboys*, but by canal breaches, “serious leaks” (the latest weasel-phrase of the Watery Wellness Trust Ltd., meaning a breach), closure for “pollution incidents”, closures for scheduled winter works and the like.

*Are cowboys surely hence to be known as “Non-Native-American Second Nation Non-Indigenous Equine-Enabled Personnel Working in the Bovine Farming Industry”, in this Brave New PC-World? I’ve lost track. Don’t even get me started on Eskimos.

Please note that the change of name from the Canal & River Trust Ltd to The Watery Wellness Trust Ltd was the Trust’s choice, not mine. They’re the ones who are focussing on “wellness by water” – cyclists, ramblers, anglers – to the exclusion of boats and boaters. I’m just calling a spade a spade. 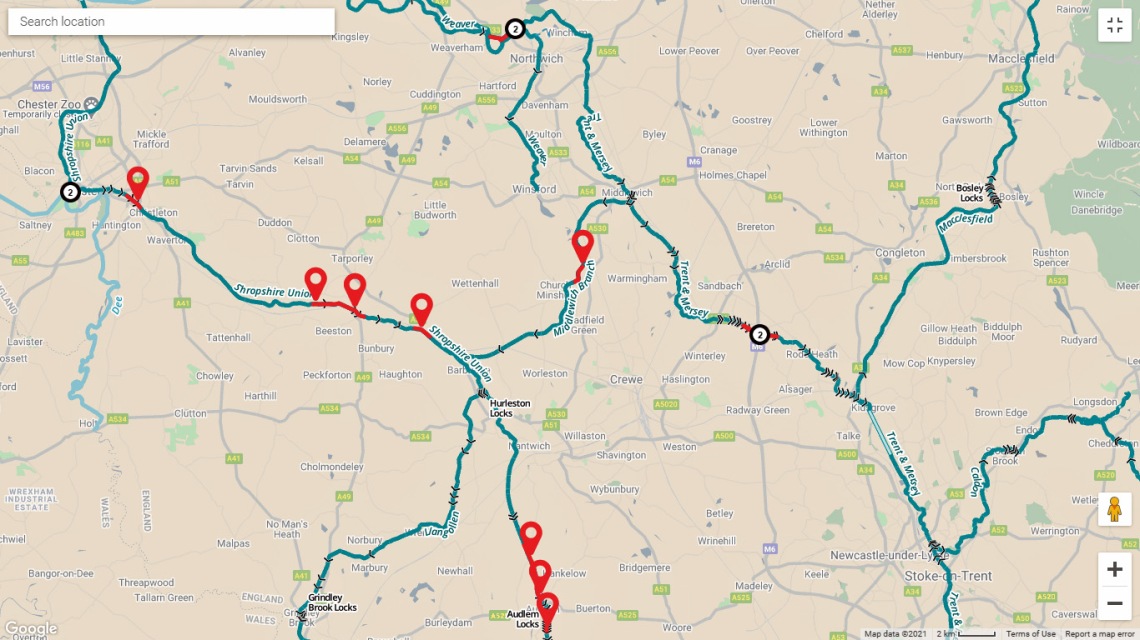 Reliable word has it that there is a Luftballon missing, there ought to be another one on the Middlewich Branch (“serious leak”?). Perhaps the ice is preventing the water from abusing the hospitality of the breach and/or serious-leak?

A mate who lives on his boat and was caught up in a breach (second balloon to the top left, counting out from the epicentre…) reports that he was swiftly refloated (life at an acute angle is disconvenient) and then even more swiftly unrefloated when the temporary dam installed failed within an hour or three of the (hard-working) (real) workmen leaving. He’s back living at more than his usual peculiar angle.

I have been put under notice from the Watery Wellness Trust that I may have ‘…trouble renewing my boat licence…’ because they consider, SARS-CoV-2 and a year of restrictions on movement notwithstanding, that I haven’t move sufficiently for their tastes. I kid you not. The email arrived just before Xmouse Eve (from a “do-not-reply” address, signed by someone who does not answer their own email address). Jingle Bells eh? Cue the Slade record, Doris.

[Thus far some seventy miles over a twelve mile range between services during three National “Lockdowns” and free but compulsory membership of the Tiers Two and Tiers Three Club – in just the first six months of my twelve month licence – and with Tier Four Greater Manchester (entry verboten) to the right, and the Welsh Border (entry verboten to the English) to the left.]

“Trouble” as in they will begin the process of not letting me pay them for a licence, with seizing and removing my boat/home from the water farther down the line. Friendly bunch, aren’t they?

Hilariously, up until a couple of days ago, the Cardinal was moored facing – at a respekable two-hundred yard distance – a boat that has had a visit from Canal Rozzers advising him of similar trouble but because he has moved too much of late…

Seriously, you couldn’t make this corporate merde up and get away with it as a Carry On Dribbling script.

You’ve got to laugh. The alternative involves weeping, and I never weep.

It is difficult to avoid the sensation that I am some un-loved hamster being chastised for not running in his little wheel sufficiently to amuse. At any moment I suspect that The Watery Wellness Trust Ltd may push a pencil through the bars of my cage, to poke me into more enthusiastic – and, unlike the pencil, pointless – running (cruising) around in little circles.

No but seriously, I really must stop causing such terrible problems by my habit of mooring up in all of these crowded, high-demand spots, and getting in the way of the Nice People so.

The temperature has been sufficient to freeze the mud of the towpath, which is wot is lovely for walkery aboutery. However, this morning, I did provide the half-dead local hedgerow sparrows with a cartoon flailing about moment when I slipped. Glad I am that I stick to the away-from-the-water’s-edge parts of the towpath as much as possible, thus giving myself more room for flailing about!

You just can’t buy a licence for this kind of fun.

Well, apparently I won’t be able to, unless I move the Cardinal about more in his little SARS-CoV-2 and wintery planned and unplanned stoppage cage.

Right. You’ll never guess what I am going to sling together in the galley for lunch to-day.

With extra chilli and garlic, and colonial white rice too.

I wonder when the Messrs Fuel Boat will arrive? Four sacks of Excel and a large swap-bottle of Blue, please.